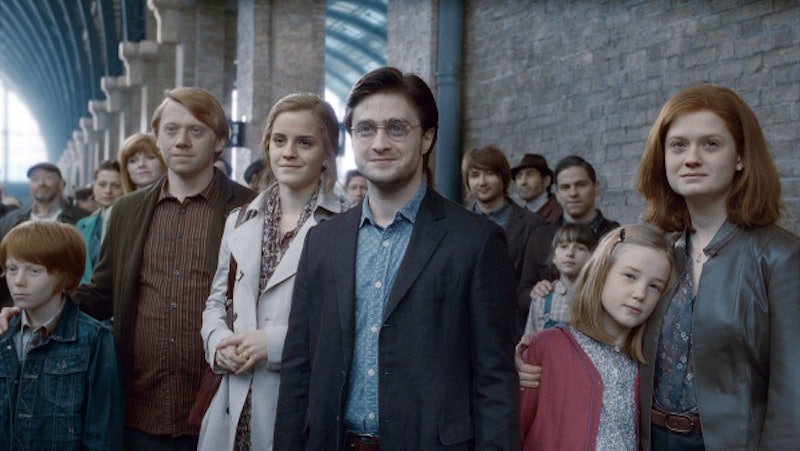 I'm sure that future generations will read Harry Potter. (I mean, there's already a huge spike in babies named Hermione.) Those kids will still read the books by flashlight under the covers late at night, and they'll still crowd around picnic tables at summer camp to read out loud, and they'll probably read in the backseats of their parent's hover craft and/or self-driving hybrid cars. But I still feel incredibly lucky to be part of the generation that grew up with Harry Potter.

There was something extra magical about having to wait for each new installment (of course, back then it was just torturous, but now that I'm older it seems like *magic* in retrospect). There were the book release parties, and those first few days when everyone you knew was reading the same book, and then the next few days when all the speed readers would threaten all the stragglers with spoilers. And of course, there was the way Harry Potter himself grew up with you: every time you returned to Hogwarts, you would be a little bit older, and so would Harry, Ron, and Hermione. Every time, the books would be a little longer, and a little more complicated. The stakes would be higher: characters would actually die off, and Harry would actually make out with a real live girl. But no matter how complicated they got, the books would always feel like returning to your childhood home.

So for everyone who grew up with the series (and even for the people who got there a little later), here are some choice Harry Potter quotes about growing up:

1. “You fail to recognize that it matters not what someone is born, but what they grow to be!”

3. “Your father is alive in you, Harry, and shows himself most plainly when you need of him. How else could you produce that particular Patronus? Prongs rode again last night.”

― Albus Dumbledore, Harry Potter and the Prisoner of Azkaban

4. “Seventeen, eh!" said Hagrid as he accepted a bucket-sized glass of wine from Fred. "Six years to the day we met, Harry, d’yeh remember it?" "Vaguely," said Harry, grinning up at him. "Didn’t you smash down the front door, give Dudley a pig’s tail, and tell me I was a wizard?" "I forge’ the details," Hagrid chortled.”

6. But Ron was staring at Hermione as though suddenly seeing her in a whole new light. “Hermione, Neville’s right — you are a girl. . . .” “Oh well spotted,” she said acidly.”

7. “You've sort of made up for it tonight,” said Harry. “Getting the sword. Finishing off the Horcux. Saving my life.” “That makes me sound a lot cooler than I was,” Ron mumbled. “Stuff like that always sounds cooler than it really was,” said Harry. “I've been trying to tell you that for years.”

8. Friday was an important day for Harry and Ron. They finally managed to find their way down to the Great Hall without getting lost once.

9. “The thing about growing up with Fred and George," said Ginny thoughtfully, "is that you sort of start thinking anything's possible if you've got enough nerve.”

11. “The scar had not pained Harry for nineteen years. All was well.”

More like this
'Bridgerton' S3 Teases Exciting Social Season For Penelope Featherington
By Bustle
The 'Lady Chatterley's Lover' Book Leaves Us With A Troubling Question
By Catharina Cheung
The 'Firefly Lane' Book Ending Teases Way More Tears To Come In 2023
By K.W. Colyard
20 Christmas Movie Quotes That'll Get You In The Holiday Spirit
By Alexis Morillo
Get Even More From Bustle — Sign Up For The Newsletter