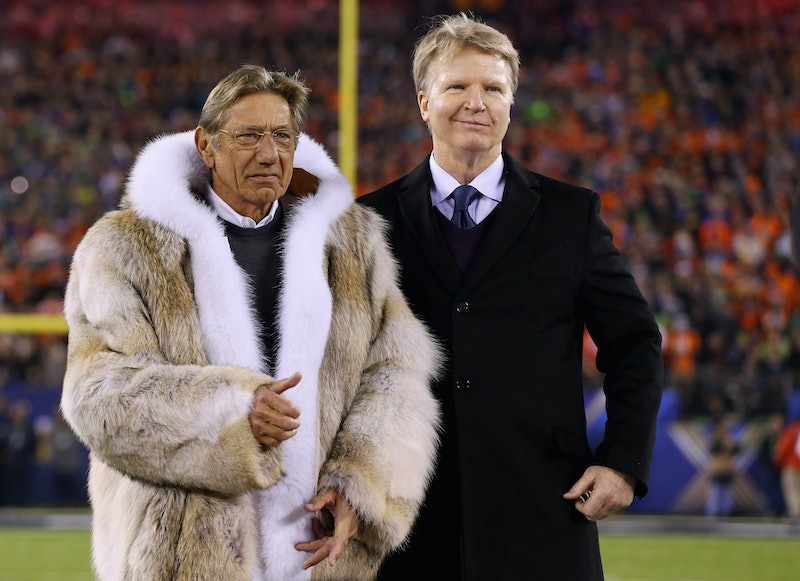 The coin toss at the Super Bowl is a time of tradition, sportsmanship, excitement and... the most WTF fashion choice of the night? NFL legend Joe Namath took this television opportunity to show off his immense adoration of over the top 1970s fur, to the absolute delight of the Internet. (Who would have thought the event was the perfect time to make such a statement?) Yes, I am sure he is staying warm (during an unseasonably warm day on the East Coast), but this was definitely a bold choice. And, of course, more than a bit of an affront to PETA — particularly when you consider the former New York Jets' quarterback is a vegetarian. Yep, you read that right: A vegetarian. (Sorry, PETA. Let's just hope this coat is fake, and not one from Cruella de Vil's closet.)

But Namath is hardly the only one to rock a retro fur look more suited for a different decade than the 2010s. In fact, clad in the fur jacket, he looked like quite a few other pop culture figures. So, during the Super Bowl coin toss, who else did Namath remind us of? Plenty of people — look below to find out who!

3. Kramer in that episode with the technicolor dream coat

4. The Snow Queen in The Lion, The Witch and The Wardrobe

6. Every single female character on Dynasty

8. A coat Samantha would wear with nothing under it on Sex and the City

10. The rug Yosemite Sam would have in his house