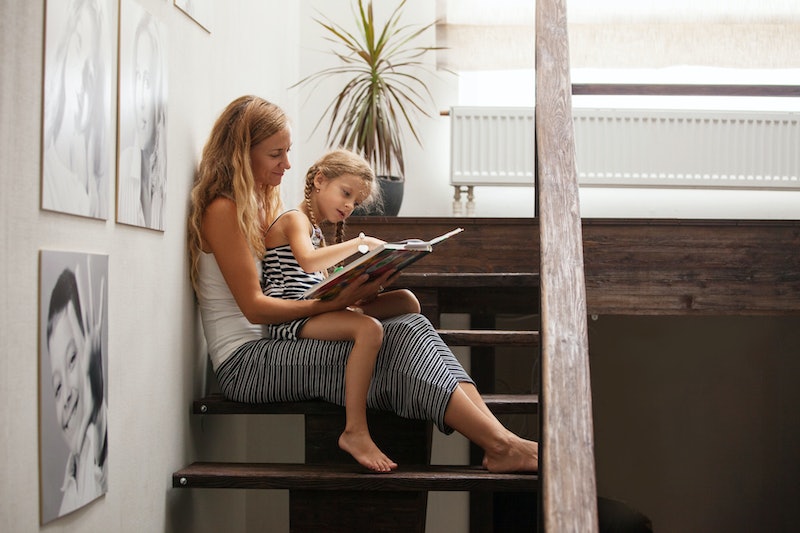 Don't get me wrong; life since the '90s has been pretty great. I mean, you'll never see me complaining about high speed Wi-Fi. Still, there's something inherently special about the '90s that deserves preserving. There are trends and traits of the time that merit passing down — things from childhood every '90s kid should share with their own kids. As a '90s kid who now has two offspring of her own, I've learned that sharing the best of my upbringing with my babies makes me an even better (not to mention more fun) mom.

Granted, there are certain things from the '90s I'm more than happy to leave behind. Relics of technology like dial-up Internet and our monstrosity of a tubular television deserved to go extinct. There are obviously also several questionable fads (read: mistakes) in fashion I actively avoid bringing up around anyone, much less advocating them to my kids. After all, I'm fairly certain there could one day be a link drawn between excessive hairspray usage (say hello to mile-high bangs!) and diminished lung capacity or something.

Of course, ultimately, I'll let my kids make their own decisions in life about what's cool to them. Until they tell me otherwise, though, here are a few nuggets of radness from my youth I'll share with them.

Are there amazing Disney movies that have been released since the '90s? Absolutely, and we'll watch those too. But it's far too much fun to get to view my favorites — think The Lion King, Aladdin, Beauty and the Beast, Mulan — through the lens of their little eyes not to have these classics on constant rotation.

I'll be the first to admit not all of my musical inclinations in the '90s were stellar (did I really know every word to "Barbie Girl" by Aqua?), but there's no doubt that I was privy to the rise of some pretty pivotal talent in the American music scene. Like No Doubt. And Smashing Pumpkins, and Ben Folds Five, and Jay-Z, and Nirvana, and Alanis Morissette and, yes, the Spice Girls, too. When they are old enough, I'll get them hooked on the soundtrack of the '90s, much like my dad did for me and Creedence Clearwater Revival.

They may have been chock full of sugar. They may have been loaded with high fructose corn syrup. But let's be real — cereal in the '90s was da bomb. And while my babies my never know the roof-shredding joy of devouring an obnoxiously large bowl of Sprinkle Spangles, you better believe I've got boxes of revival cereals like French Toast Crunch and Cookie Crisp in my pantry.

The reality of growing up in the '90s was that there was far less to do inside the house that kept us rooted indoors. No smart phones. Very little in the way of gaming systems. I don't even think we had cable in our house. Our lives were spent skinning our knees on asphalt while trying to master rollerblading, getting a million grass stains playing flag football, and squeezing the life out of every minute until mom called us in for dinner. Definitely a keeper.

Another favorite way to while away time in the '90s was reading — actual pages, not blue screens. Some of the tomes that were highly popular during my childhood I'm already enjoying with my kids: Matilda, James and the Giant Peach, The Secret Garden, Harriet the Spy, The Giving Tree. But I can't wait until their older and I can pass on books that affected me on a deeper level, like The Perks of Being a Wallflower, The Virgin Suicides, Naked, White Oleander and more.

While it's entirely possible you possess the one Barbie that could net you a hefty sum on eBay, the greater likelihood is that what you'd get for selling your prized '90s possessions will pale in comparison to the joy it brings both you and your kids if you pass those collectibles down. I once interviewed Toy Hunter 's Jordan Hembrough, and he confessed he hoped to pass his Star Wars figures on to his own children one day for sentimental reasons. If Hembrough can do that, I can surely part with a few Beanie Babies.

7. A Love Of Lunchables

Food in the '90s was seriously the best — especially when you were a kid — and arguably the best of the bunch was Lunchables. These conveniently pre-packaged snack packs were the lunch of champs back in the day! Confession: My kids love the way they taste, and I love the fact I get to save an additional 17 brain cells I'd otherwise use trying to come up with an appropriately portion sized lunch in a hurry. Toss in some cherry tomatoes or carrot sticks and you're golden, parents.

Would I prefer some of the photos of me in the '90s to go the way of the dinosaurs? You betcha. However, my kids adore seeing the person I was on the way to becoming their mom. My 4-year-old daughter even thinks my braces were "beautiful and sparkly." So while it's tempting to want to banish any photographic evidence of our more questionable '90s moments into non-existence, those old photos are a pretty great way to wax nostalgia with your kids and teach them being cool doesn't always mean looking the part.

More like this
David Schwimmer Doesn't Remember This Classic 'Friends' Episode
By Sam Ramsden
5 Mini Skirt Outfits To Wear, Inspired By These Brave Souls
By Avery Matera
Starbucks’ Chocolate Cream Cold Brew Tastes Like This Retro Candy
By Emma Garza
When Did Tamagotchi Come Out? In The U.S., 25 Years Ago
By Kaitlyn Wylde
Get Even More From Bustle — Sign Up For The Newsletter