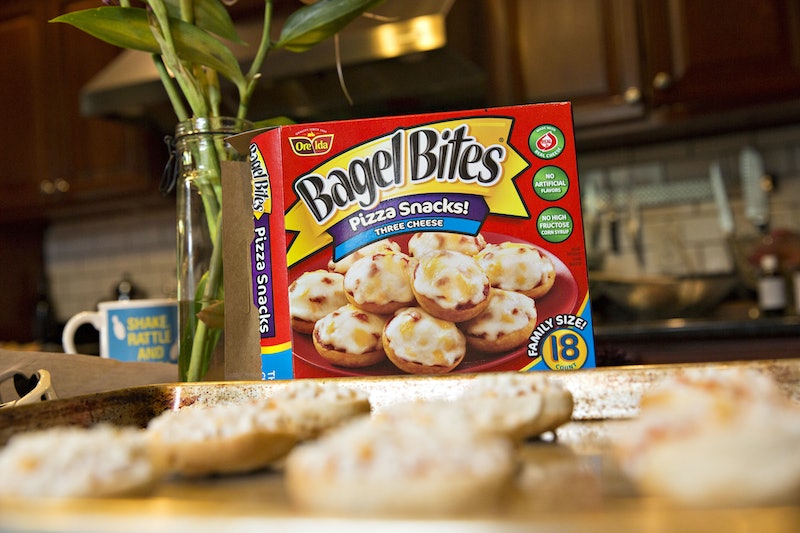 History repeats itself and, like music to the '90s kid's ears, that sentiment holds true in the culinary world, too — there's no shortage of '90s foods you can still buy today. And let's be real: food when we were growing up was just plain fun. Not only did the '90s have an abundance of the coolest fashion to offer, but we were also able to fuel all of our slap bracelet and flannel-filled shenanigans with the best snacks ever.

Some of these foods came and went in a flash before our eyes, living their brief lives as mere sweet or savory taste bud teasers. How cruel for them to be taken away so soon! Happily, though, the '90s food gods have spoken, and many of these nostalgic snacks have been given a second lease on life (much to the delight of '90s kids the world over). Others are even like the Jackie Chan of the food world, aka perpetually the subject of death hoaxes despite having never gone out of production.

But, as they say, knowledge is power. And now that you know these throwback snacks are still available for purchase, you can stock up on as many as your '90s-lovin' self so desires.

Why, yes, I do have Gushers in the pantry at this very moment. What kind of mother would I be if I didn't let my kids indulge in tiny bits of tasty nostalgia every now and then?

It's not just that these salty, corn-flavored snacks are yummy — it's the fact that their unique funnel shape allows you to stick them on your fingers and pretend to be a wicked witch whilst you eat them. Therein lies the magic. Long live Bugles!

When this syrupy cereal was introduced in 1995, '90s kids couldn't get enough of it, so naturally we were none too happy when General Mills discontinued it in 2006. But, hey-oh, as of December 2014, it's back on the market, baby.

Everyone who was anyone knew that Bagel Bites — that delicious hybrid of bagel and pizza — was the after school snack of champs.

Despite persistence rumors of their discontinuation, DunkAroos do still exist. They've been narrowed down to only two flavors and can be hard to find (check Costco, Wal-Mart, and Dollar General), but at least this sweet treat lives on.

Talk about the taste of my childhood! I can practically smell a pot of this sauce simmering on the stove now. Originally launched under the Ragu brand, this sauce is now a standalone brand in select supermarkets. The only downside? You'll never get that catchy "I feel like Chicken Tonight" jingle out of your head.

Waffle Crisp cereal was a smashing success when it was introduced in the '90s. I mean, waffles in cereal form? This was a no-brainer, right? Happily, you can still score these maple-laden squares at grocery stores and online.

These taffy-like strips were a staple in cafeterias and at the concession stand of our school sporting events — and today you can likely still find them there, as well as gas stations and convenience stores. They're basically pure sugar and I'm 97 percent certain there's actually only one flavor, but they sure do take ya back.

Oh man, what '90s kid didn't beg their mom to stock the freezer with these kid-friendly frozen meals? Mini corn dog bites, french fries, corn, and a brownie? Yes, please! Head to the frozen foods section at your local Wal-Mart or other supercenter to fill your freezer (and, presumably, your '90s kid heart).

When M&Ms introduced these malt-ball-like snacks in the '90s, all was right with the world. We became addicted to their delicious crunchy texture, only to have them discontinued years later. Perhaps thanks to the slew of petitions insisting upon their comeback, though, Crispy M&M's were revived in 2014 — and they're still legit, y'all.

Technically, these two-compartment snacks consisting of crackers and cheese(-ish stuff) launched in the '80s. But it was '90s kids who made them a must-have staple in lunch boxes and as after-school fuel. Not only do these guys still exist, but the company who manufactures them has branched out to include heavenliness like Oreo cookie sticks and cream cheese.

Looking back now, I'm not sure why we were all so obsessed with these suckers. We wore them too long, they would inevitably get stuck in our hair, and they'd turn our teeth red. Still, their appeal has survived all these years — my kids lose their sh*t over these at the Dollar Store.