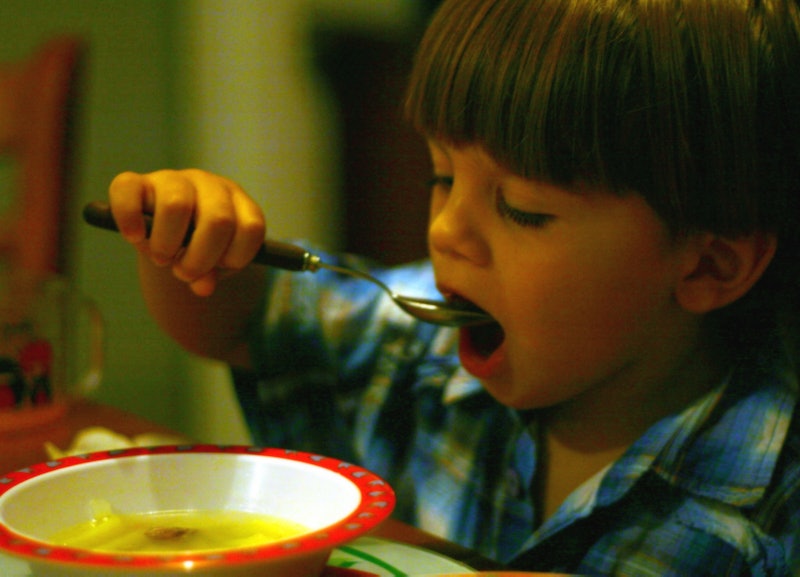 You know what is great about having grown up in the '90s? While I'm tempted to say everything, the reality is all the things we're nostalgic about now didn't always seem so super when we were living them. What is amazing, though, is how '90s kids have been able to spin both the best and the worst of our beloved decade into positives. We turned them into teachable moments, which we've since applied in our daily lives — and this seems especially true for '90s kids who now have kids or their own. Because, let's be real, there are a multitude of ways being a '90s kid makes you a better parent.

For starters, we have the example set by our own parents serving as a benchmark for what to do and, more importantly, what not to do. Sorry for the latter, Mom and Dad, but sometimes we can't help but wonder how we ever even made it out of the '90s — the toys alone could very well have done us in. In general, though, growing up in the '90s has made us better parents because we were raised during a time when you really had to roll with the punches. We adapt easily and are full of imagination, both of which are incredibly useful traits when you're raising a tiny human.

Here's how those traits translate into '90s kids making hella good (maybe I should add '90s slang to the list) parents.

Hey, we didn't have the high-fangled technology today's kids have. Those seven-hour road trips to the grandparents' house in Florida couldn't be whiled away by playing Candy Crush or watching Monster High via the car's DVD player. And while kids' today have the benefit of sophisticated graphic programs to help complete school projects, our supplies were essentially limited to poster board, popsicle sticks, glue, and an assortment of glitter. Hence, creativity. Should '90s kids ever run into a bump in the road as parents, we know how to think outside of the box — and get our kids to as well — to keep things fun.

Growing up in the '90s, we didn't have the crutch of social media to make digital connections and amass hundreds of friends. We rolled old school — we sparked friendships face-to-face. We didn't have any other choice than to put ourselves out there and hope for the best. And odds are good those three or four BFFs we had growing up are still in our circle of closest friends. As such, we're the type of parents who believe in playdates. We're cool with our kids spending the night at their besties' houses, because some of our best memories were made during sleepovers.

This isn't to say that kids today don't think for themselves, but they do have certain advantages we didn't have which minimize the amount of thought they have to put into any given activity. Spellcheck, graphing calculators, and apps for everything from metric conversions to reading maps help with the heavy lifting these days. But since '90s kids lacked these modern amenities, we're more likely to impress upon our offspring the importance of being able to sort stuff out on your own (after all, we're all still a little spooked from dreading Y2K for all those years).

4. We Love The Great Outdoors

OK, so probably not every '90s kid necessarily loved and/or loves the great outdoors — but we know them. We are used to them. They are where we chased the sun into the evening playing marathon games of "Capture the Flag" or "Don't Step in the Lava." We spent countless hours during our formative '90s kid years exploring the outdoors and playing backyard sports with our family and friends. Naturally, we want our kids to know the glorious abandon of soaking up Vitamin D while not being tethered to a smartphone or tablet.

One word: dial-up. I mean, right? We had to be patient in the '90s, counting the passing minutes waiting for our internet to connect (and disconnect and reconnect every time our mom or dad had to make a call). We couldn't binge-watch anything, unless we wanted to attempt it with a towering stack of VHS. And, not gonna lie, it wasn't the best. But spending so much time waiting helped shape us into far more patient people and, as all parents know, patience is perhaps the greatest virtue a parent can have.

6. We Know the Importance of Vetting What Our Kids Watch

I was in no way prepared for Mufasa's death the first time I watched The Lion King. Or for the many tragic grizzly bear related deaths due to mauling on The Animals of Farthing Wood. Our cartoons could be brutal back in the day. And who knows how many pervy subliminal messages I picked up watching Disney movies over the years! The moral of the story being that I'm hyper aware that just because something is made for a kid doesn't mean it's made with kids in mind. Of course, that Spongebob is one funny guy ... sexual innuendo and all.

More like this
David Schwimmer Doesn't Remember This Classic 'Friends' Episode
By Sam Ramsden
‘90s Streetwear Brands That Are Making A Major Comeback
By Dominique Norman
Hayden Panettiere Will Return For 'Scream 6': "We F*cking Won, Scream Fam"
By Jack Irvin and Jake Viswanath
Kim Cattrall Spilled All The Tea About Not Being In The 'Sex And The City' Reboot
By Radhika Menon
Get Even More From Bustle — Sign Up For The Newsletter