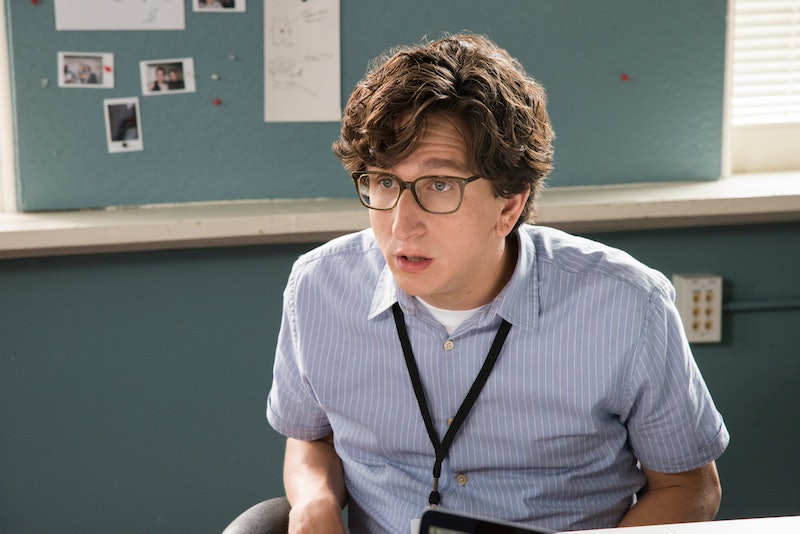 The Netflix description for Love reads that the new series "follows nice guy Gus and brazen wild-child Mickey as they navigate the exhilarations and humiliations of intimacy, commitment, love and other things they were hoping to avoid." One of the potentially troubling aspects of the show is right there in that description. Gus' Nice Guy syndrome on Love is something we've got to talk about.

In the pilot episode, Gus' girlfriend Natalie breaks up with him — or as we later learn gets Gus to break up with her — because he's too affectionate and too nice to see the problems in their relationship. When their breakup gets heated, that amends slightly to her accusing him of being "fake nice, which is worse than being mean." Mickey says the same thing later, that he pretends to be nice.

Nice Guy syndrome is a trope in which men bemoan the fact that girls only date jerks and not nice guys like them, and also the idea that said men use "niceness" as a means to a sexual end. There often seems to be an assumption in both media and the real world that men who are “traditionally” masculine must be "jerks," whereas “nerdy” men or those who are more sensitive are all "nice." Anyone who's read up on or experienced GamerGate can tell you that's absolutely not always the case in real life, and that's just one example. This trope is not fair to anyone.

In Love, Gus doesn't state this explicitly, at least not early on. While Gus has many complaints about his life, girls not liking him is clearly never a problem. The sentiment actually comes from Mickey's character. "He's so sweet," she says in one episode. "I just though that was the benefit of having sex with a nice guy, is he was nice to you," Later, Gus accuses Mickey of only wanting to sleep with him because he's a nice guy and that would indicate that she's getting her life together.

But is Gus nice? That's not a word I would use to describe this character; not really. I don't think a nice person would purposefully tank a date just for texting her friend that she wasn't interested in him — Mickey totally saved that situation for Bertie. I don't think a nice person would go off in a television writer's room about how terrible and/or flawed a show is when they bought his script and are instrumental to his career. "You immediately become like every other lame girl who, like, gets clingy and won't give a guy space" is not something that a nice person would say and calling Mickey crazy two seconds later is certainly not nice.

I don't honestly even think Gus believes he's nice, yet he's constantly labeled as such or accused of not living up to said label. Why is that? Do we even know what nice means anymore? Sure, it's subjective — something you might think is nice could get on someone else's nerves. But you definitely shouldn't equate "nice" with "nonthreatening" or something like that.

I enjoyed Love, but honestly I don't support Gus and Mickey's relationship one bit. Until the ending, in which the two do get back together, I was holding on to the hope that this show was taking down the "nice guy" trope and proving that it's an unfair way to categorize men. It's not 100 percent clear what Love is trying to say, but I think it may have only added to this tiresome trope in the process. Gus and Mickey's relationship is unhealthy in many ways and on both sides, but Gus' Nice Guy syndrome is definitely a part of it.