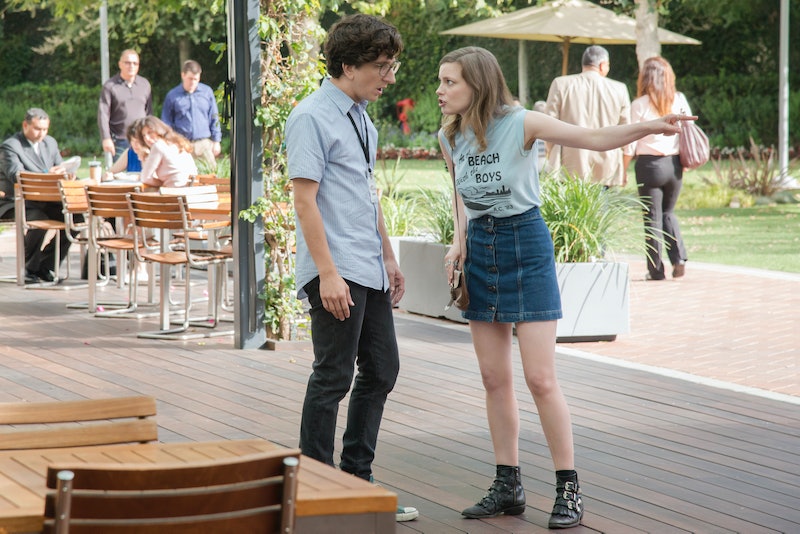 How much do two people who first venture into a romantic relationship really owe to each other? That was the question that came to my mind during the epic "cool girl" vs. "nice guy" fight in Love Episode 9. Judd Apatow's latest venture into television territory is a realistic approach to two early 30-somethings, Gus and Mickey, who are fumbling in life and love. After a chance meeting at a convenience store, the Netflix series explores these two people — a seemingly "cool girl" who people find fascinating and nonconformist, and a seemingly "nice guy" who people find non-threatening and nerdy — as they attempt to figure out what exactly they want from each other.

In the penultimate episode of Love's first season, Mickey (Gillian Jacobs) shows up at Gus' (creator and writer Paul Rust) work on the TV show Witchita because she is obsessing that she ruined their relationship after their first real date. Although they only had the one real date, Gus had been interested in Mickey and it seemed the two were attempting something resembling a real relationship. (I mean, the title of the show is Love, after all.) Of course, neither of them signed a contract to one another, but when Gus turns cold after Mickey was dismissive and difficult during and after their date, Mickey becomes completely absorbed — even calling out of work and lying to her roommate Bertie — with trying to get back into Gus' good favor.

Here's the main gist of Mickey and Gus fight that goes down in Episode 9, "The Table Read," courtesy of the characters themselves:

M: "I'm just picking up on what you put down. I mean, we had sex two days ago. Do you not remember that? We had sex and then you immediately turn into this huge dick."

G: "You're pretending to be this like cool girl, you know, who doesn't follow the rules of how things go, but then we have sex and then you immediately become like every other lame girl who like gets clingy and won't give a guy space. OK?"

M: "Surprise! I'm not the cool girl, OK? I'm not just some girl that you can f*ck for a while to prove to yourself that you can be dangerous and edgy and you're not some huge dork, and then you go off and marry whatever boring lady."

G: "OK, so that's what I am to you then. I'm just this f*cking dork, huh? I'm this f*cking dork who you f*ck and then you can feel like you're getting your life together cause you're f*cking a nice guy and you're not f*cking a piece of sh*t anymore, OK?

By their profanity-laden and super-Apatowian exchange, both Mickey and Gus are not only arguing for why they shouldn't be considered the stereotypical cool girl and nice guy respectively, they are proving it with their words. Mickey is hurt at the thought of Gus blowing her off after their date and Gus is not so nice that he'll accept being yelled at work without a fight. Neither Mickey or Gus is handling the situation with the most maturity as they let their emotions completely take over, but that's also what makes Love so damn relatable. Emotions are not easily controlled, no matter your age, especially if you are as vulnerable as Gus and Mickey.

While in the moment, I was more annoyed with Gus than Mickey (more on that in a moment), here's how the lead characters in Love were both wrong — and right — during their first major relationship fight.

After blowing off Gus by setting him up with the hilarious and adorable Bertie, Mickey finally went on a date with him. Unfortunately, she let her mercurial nature get the best of her during their date to the Magic Castle and got the pair of them kicked out. Afterward, they still had sex (for the second time). Then, when Gus invited her over to his house the next day for one of his title song parties, she was completely dismissive and when she did show up to the party — purposefully unannounced and late — she was volatile and hostile with his friends.

I'm fully aware that Mickey is not totally innocent in the situation and had no right to surprise Gus at work and expect him to drop everything to discuss their budding/dying relationship. Yet, just because Gus had pegged Mickey as that cool girl doesn't mean her emotions should be dismissed, which is what he seemed to be doing. Plus, he was at fault too for their past issues. He could have told her he didn't want to date Bertie, listened to her when she expressed displeasure in the idea of the Magic Castle, and stood up to her when they decided to stay for the magic show and she was being rude. While Mickey does not know for a fact that he had sex with Heidi, an actress on Witchita, the night of the title song party, she has a right to be vulnerable since Gus' attitude toward her changed. Mickey is wrong for calling him out on sleeping with Heidi at work, but it's definitely understandable that she'd be upset that he hooked up with someone else the day after their date.

Yet, as Mickey was shown going through Gus' Facebook and Instagram before approaching him at work, Gus' point that she was looking to him to help make her feel better about her life was valid. To Mickey, Gus is one of the most functional, "nice" guys she has ever dated. Because of that, she probably didn't expect to get hurt by him and became even more upset at the idea of rejection.

Let's be real here: Mickey showed Gus that she was not completely emotionally stable right from the get-go when she screamed at the cashier at We Got It! food mart in their first meeting. Another quick, telltale sign of her self-absorption was the fact that when Gus offered to pay for her coffee, she pressured this complete stranger to also buy her a pack of cigarettes. Even though Mickey didn't come out and tell Gus she was addicted to alcohol, drugs, and relationships until the season finale, Gus — as a "grown man" (yes, I am slightly scoffing as I write that) — should have realized there was more to Mickey than her just being a "cool" girl. There's more to anyone than such a simple label.

Although I get where Gus was coming from by liking the attentions of the beautiful, funny, intelligent, and off-the-wall Mickey, his ego took over since he was just focused on being pleased with himself that someone like Mickey would want to spend time with him. So when he realized that maybe Mickey wasn't who he expected — e.g., a woman who acts out sometimes when her narcissistic and spontaneous actions aren't always embraced — he should have evaluated what he was doing with her.

Instead, during "The Table Read," Gus showed what a truly not nice guy he can be by calling her "f*cking crazy" during their fight and later deleting Mickey's number out of his phone. If Gus thinks his life would be better without Mickey, then it is his prerogative to end whatever kind of relationship they have. But instead, he took no responsibility for the emotional toll it may have on Mickey to have sex with her one day and then have sex with Heidi the next. He was selfish and didn't consider how Mickey may actually get hurt by his rejection after he had been pursuing her, proving as Mickey said, that Gus the "nice guy" can actually be really mean.

As with most arguments, there is no winner or loser in Love. I get that Gus wants to come off as nice, but instead his true feelings come out in his passive aggressive actions and he keeps his real emotions bottled to the point that he becomes cruel. And I get that Mickey, struggling with addiction and dependency, became overwhelmed at the thought of ruining another relationship that she panicked and became completely self-centered and not considerate of Gus' feelings.

Since the season finale of Love ended with Gus kissing Mickey after she told him she needed time to herself before starting a relationship, I expect more fights between them in upcoming seasons. However, in Season 2, the pair should hopefully know one another beyond their "cool girl" and "nice guy" tropes and not fight over their preconceived notions of each other's personalities. Their fight showed that these labels are overly simplistic and unfair, so now it's time for Gus and Mickey to begin to explore the deeper, more complex aspects of each other's personalities. If it's Love, thats an important next step.