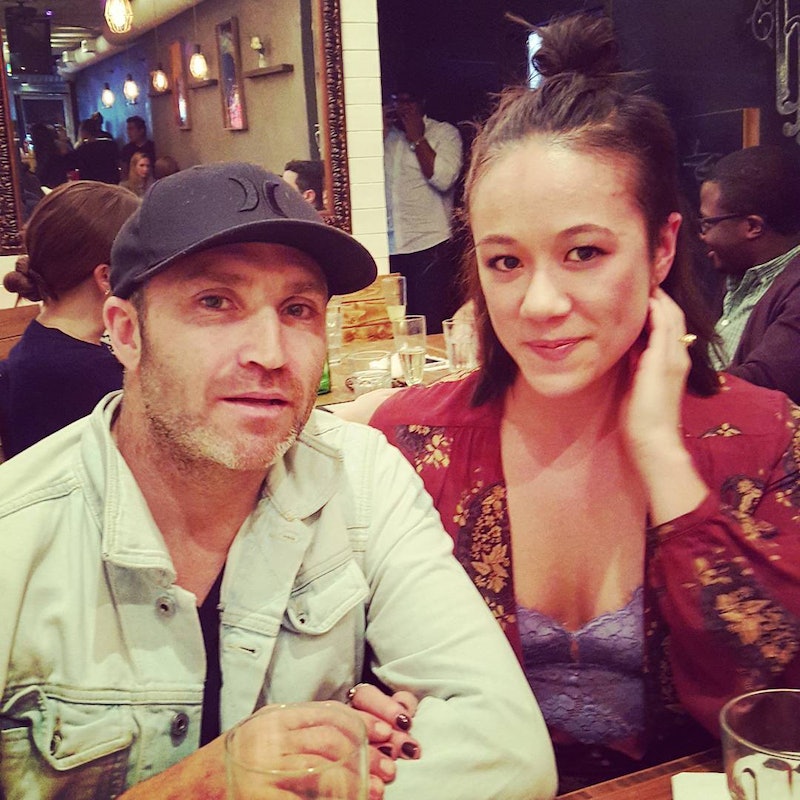 I've never been one of those people who can stay friends with an ex. I'm like Miranda in that Sex and the City episode — the one where she literally sprints in the opposite direction when she spots Steve down the street. So when my boyfriend and I broke up a while ago, we cut off all communication from each other. No texts, calls, or emails, and we didn't even check in with mutual friends to see how the other was doing. There was a lot of hurt there, so the both of us really did think that it was all over — for good.

But we're pathetic human beings who just couldn't stay away from each other, so after several months we slowly started emailing back and forth again. While we were apart, we independently did some good old-fashioned millennial soul-searching, and figured out that we were still in love with each other. We started seeing each other again, but this time with a few new rules in the book. Not everyone thought it was the best idea, which is understandable because shacking up with your ex doesn't always work out. It did for us, though. For the time being, anyway.

Here are 11 things that happened when my ex and I got back together.

1. We Went To Couples Therapy For A Little While

Well, a version of couples therapy, anyway. We were in Peru at the time, and there was a well-known woman in the area who had worked as a licensed psychiatrist for nearly 20 years in the Netherlands before she moved to South America. She combines her Western education with spiritual, meditative work, and does her own version of therapy called "family constellations".

It sounds dumb, I know. Call me a moron all you want, but it really helped us work out our hairy problems. At the very least, it gave us a room where we could scream about all the things we were pissed off about, as well as an unbiased third party who could play referee.

2. We Started Having "Better" Fights

Don't get me wrong, having no fights would be the best-case scenario, but the nature of the arguments we found ourselves in were different this go-around. Instead of yelling about small things, like who left the freezer door open all day and wrecked the ice cream, we were disagreeing on more important things, like what constitutes appropriate interaction with our exes.

I thank therapy for this one, because without it we wouldn't have learned how to wade through these fights and come out on the other side like mature adults.

3. We Decided To Stop Name-Calling

Our name-calling wasn't reality TV show-bad, but we did have some bad habits in our first relationship. Whenever we got frustrated, we would whip out little words that weren't very nice — idiot, dumbass, dickhead, bitch, etc. — and toss them around like it was nothing.

It sounds minor, but the words we use with people in our lives prove how much respect we have for one another. We decided it wasn't doing our relationship any good to keep up this kind of dialogue, so we tried our best to bite our tongues.

4. We Started Having More Sex

This is pretty expected when any couple gets back together after spending time apart. But our increased sex drive has lasted ever since, and we're still consistently having more sex than we were before. I think the renewed emotional connection has made us feel closer physically, which has amped up our sex life. Hey, I'll take it.

5. We Had To Answer A Lot Of Uncomfortable Questions

If there's one thing I learned from this whole thing it's that people are nosy as hell. I swear, they lined up to ask us all kinds of awkward, borderline-invasive questions. They wanted to know if we were hooking up with anybody else during our time apart, whether we were planning on getting married this time around, or if we were now trying an open relationship.

It was annoying, to say the least. But it was nice to see that he and I were on the same page throughout the interrogations. We agreed on which information we would keep to ourselves, and which we were willing to share with friends and family.

6. We Spent More Time With Each Others' Friends & Family

See? There he is with my cute cousin! When we were together before, we had done the whole meet-the-parents thing, but that was about it. The commitment phobia we both deal with stopped us from introducing each other to some important figures in our lives. I'm glad we moved past that, though, because having him meet my family and friends went a lot better than I thought it would. Some of it was even fun.

He and I have both always struggled with commitment. We're terrified of it, in fact. That fear affected how we presented ourselves online. Our subconscious brains stopped us from showing we were actually together on Facebook; heaven forbid things looked serious. So we barely posted pictures of ourselves, and there was hardly a trace of us as a couple on the Internet.

This contributed greatly to the destruction of our relationship. With that kind of dishonesty, you end up dealing with a lot of jealousy and trust issues, and, more importantly, if you appear single online, you'll probably end up acting like it in real life. We decided to fix this up as soon as we got back together, and we've really benefitted from outing our relationship, so to speak. (I mean, I'm writing this, aren't I?)

I'm the kind of person who loves being alone. My boyfriend, on the other hand, is more of an extrovert, so he gets his fuel from being with people. One of the things that tore us up before was how little time I was getting to myself. Without the time to recharge and take a break from any and all human beings, I was irritable on a regular basis. Cue the silly fights and bouts of depression.

Now, every couple of months, we make it a point to spend a week or two apart. He'll go on a surf trip or I'll take off on my own for a while. If you think I'm totally crazy, know that Helen Mirren recommends it, so it must work.

9. We Became More Appreciative Of One Another In General

Ugh, even I hate sounding this cheesy, but it's the full-on truth. It's so easy to take each other for granted when you've been together a long time, and that's exactly what happened the first go-around. When we reunited, we promised to try to show each other appreciation in the smallest ways possible. We screw it up a lot, and our relationship is far from perfect, but things are a hell of a lot better than they were last time.