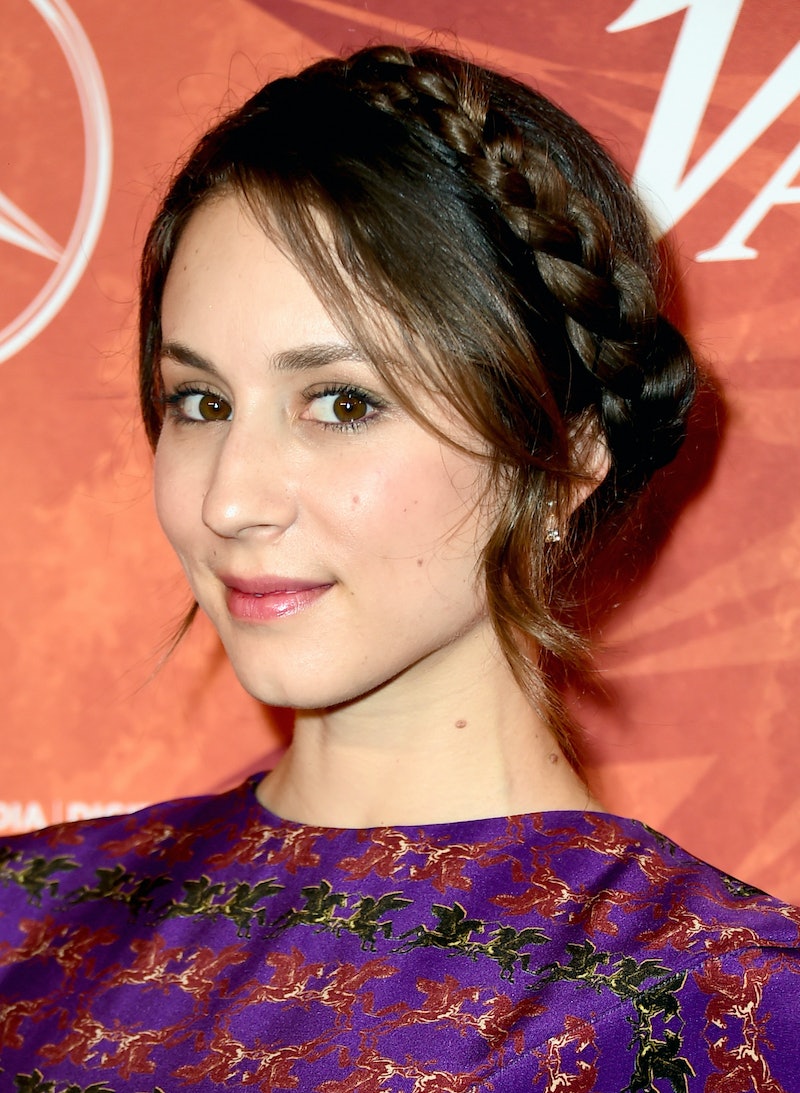 Considering some celebrities have millions of followers on social media, I'd have to guess they don't see every single comment. But when spam accounts kept trying to promote diet pills on her Instagram page, Pretty Little Liars star Troian Bellisario shut them down like a boss. The 30-year-old not only responded to individual comments, but then screenshotted the exchange and posted it to her page, along with the following caption:

I can't stand the fact that idiots can use my personal Instagram to promote horrible products that do NOT WORK BUT that encourage dangerous weight loss. Especially to all of my younger female fans. There's a really special place in Internet hell for you.

Understandably that must be incredibly annoying — not just for the excess of notifications, but the unhealthy message they're spreading, especially to her young audience. This is a subject she knows firsthand, since Bellisario has previously been open about struggling with an eating disorder as a teen. In 2014, she told Seventeen,

I started self-harming when I was a junior. I would withhold food or withhold going out with my friends, based on how well I did that day in school.…I didn’t know what was right and what was wrong, so I think I created this bizarre system of checks and balances to create order in my world. But it really backfired.

Considering she's experienced body image struggles herself, it makes sense she doesn't want anyone promoting unhealthy messages on her page. This isn't the first time she's posted meaningful Instagrams. Here's a round-up of the PLL star's most body-positive moments.

As Bellisario pointed out, those kinds of products "encourage dangerous weight loss. Especially to all of my younger female fans." The fact that she knows her fan base is so important. Plus, it's awesome she wants to avoid spreading such dangerous messages.

After photos surfaced from the PLL cast's GQ shoot in 2014, she shared behind-the-scenes photos and wrote,

Many people have said that we were photoshopped... OF COURSE WE WERE! that's a very specific type of photo shoot... I'm proud of my body and the way it looks because @themarkwildman kicks my butt in aerial. But my hips and thighs are a part of me (even though they magically weren't in some shots!) I get those things from my momma. And I'm happy To shake what my momma gave me.

I love that she decided to show fans what really went down at the photoshoot, while reminding her followers that her body parts make her who she is.

In this selfie's caption, she makes sure to highlight the fact that she gets her hair and makeup done professionally. She writes,

That's not beauty. That's make up it's a curling iron and hairspray. What's beautiful is inside you. It's your creativity. It's your intelligence. Your empathy and your kindness to your fellow man.

This serves as a powerful reminder that inner beauty is way more important.

In an interview with Larry King, Bellisario talks about her hesitation in speaking up, because she didn't want her eating disorder to be sensationalized. She said,

What I so often find is that it becomes about the facts — how much weight did you lose? How were you treated? Were you hospitalized? And that's not important to me. What is important is to talk about the feelings, to talk about the help that young girls and young men who have this problem can get if they find that they are suffering.

Props to her for wanting to talk about her feelings in the hopes of helping others who are struggling.

5. Reminding Fans There's No Such Thing As Perfect

In the February 2014 issue of Seventeen magazine, Bellisario said,

I’ve heard fans say that I’m perfect on the show and I want to tell them I’ve been through two hours of hair and makeup. Don’t hold yourself up to that!

It's a valuable reminder that nobody is perfect and even celebrities wear makeup to look flawless on-screen.

You may think she feels most glamorous all dressed up on the red carpets, but you'd be wrong. In that same Seventeen interview, she said,

I love being natural. I never feel more beautiful then after I’ve been to the beach and my hair’s just a crazy mess of salt curls, or when I’ve just been outside all day hiking. I feel like my skin is at its most beautiful during those times, too—so I try not to do a lot.

It sounds like when she's doing things she enjoys physically, that's when she feels best about her body, which totally makes sense.

When a promotional PLL photo was way too edited, Bellisario joined her co-star Ashley Benson in pointing out the unrealistic image. While she commented on how cool the concept was, she wrote, "But aren't we attractive enough women as we are? Why can't we just look like us. Once."

Bravo to Bellisario for promoting these messages of self-love, all while trying to help her fans avoid unrealistic body image ideals too.

More like this
Kylie Jenner Roasts Kendall For Her Cucumber Cutting Skills On TikTok
By Jake Viswanath
Taylor Swift, Kerry Washington & More Speak Out On Uvalde Mass Shooting
By Jake Viswanath
Halsey Calls Out Label For Asking Them To "Fake A TikTok Moment" For New Song
By Jake Viswanath
These Adorable Kourtney & Travis Moments Led Them To The Altar In Italy
By Bustle Editors
Get Even More From Bustle — Sign Up For The Newsletter