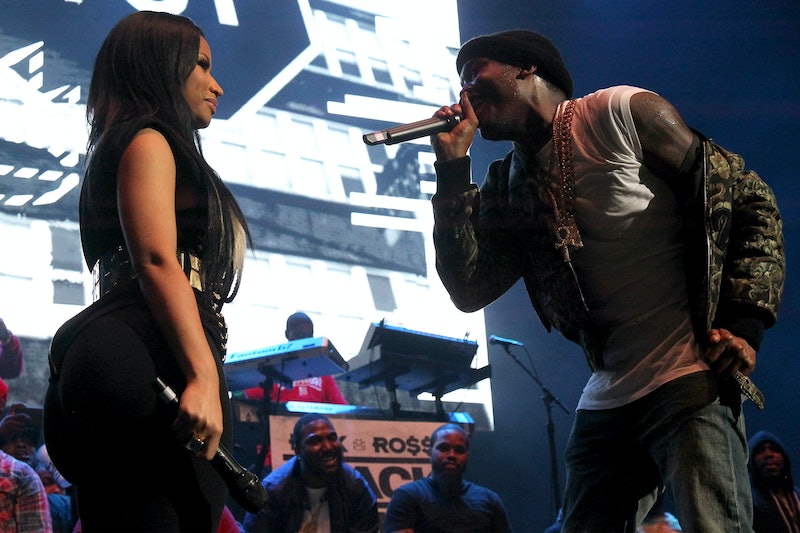 Nicki Minaj is not the type of celebrity who seems to have rumors of relationship drama terribly often — for more than a decade, she was in a serious relationship with Safaree Samuels, and that included much of the time that her rap career was blossoming, which we all know ultimately turned into her being one of the top-selling female rappers of all time, thankyouverymuch. Samuels was there when Minaj was just beginning her empire and cementing her status as a force to be reckoned with not only in music but as an actor, beauty mogul, and model. But Minaj and Samuels split sometime in 2014, and Minaj made room for a new love in her life: fellow rapper Meek Mill. Minaj has waxed poetic on her feelings about her man, and Meek Mill has said plenty of sweet things about Minaj, too.

Their relationship, though still relatively new, has definitely been subject of many stories already: from Mill's beef with Minaj's longtime friend and collaborator Drake, to that huge-ass diamond ring the couple insists isn't an engagement ring (if you're keeping score at home, when Minaj and Mill are really engaged, she'll have three rings... as you do.). But Mill is super proud of his lady and he's not shy about it.

She's Changed Him For The Better

Mill told XXL last spring that Minaj has got him doing things he simply never used to do. And it's sweet:

I’m like, “I don’t really hold hands, but like, I’ll hold hands with you.” She know that. Like, I don’t really do things, but certain people make you do certain little stuff and it be like, “Sh*t, I don’t care.” They can catch me in the pictures doing anything nowadays, holding an umbrella for Nicki, you know what I’m saying?

They're Taking Their Time

Though these two appear to be on the fast-track to marriage (even grandma Mill loves her!), Mill told Fader early last summer that he's not in a rush for happily ever after with his girl. "It’s definitely real, but it ain’t really time to get married yet. We’re still learning each other, feeling each other out." No worries!

The couple had a dust up over releasing their collaboration with Chris Brown called "All Eyes on You" as a single, but Mill told Billboard that all is good between them:

She wanted it to be my single, and I didn't. It turned into an ego argument. She killed me on that song, but I don't really care. When my girl do better than me, I still win. When I do better than her, she still wins.

His Newfound Celebrity Is Challenging

Being a couple in the public eye is something new for Mill, who simply wants to be normal when out with Minaj sometimes, as he lamented to Billboard: "You want to be private with your girl once in a while. I would love to be able to just walk down the street by ourselves." Suffice it to say that people will likely be following them on the street for a long time.

What More Do You Need?

As for what he likes most about his lady, Mill told GQ during a joint interview with his girlfriend:

That you [Minaj] was a hustler. That you were doing your thing. A lot of people coming up. People don't really have a girlfriend that's doing more than them or the same thing. I like girls that hustle. She a boss. She's pretty as f*ck. Bad as sh*t. Ambitious. What else do you want?

I'm no expert in the department of love, but I think these two have a sweet future ahead!

More like this
Harry Styles Opened Up About Olivia Wilde With A Rare Comment About "Trust"
By Sophie McEvoy
The Very Best Quotes From Dr. Taylor Swift’s NYU Graduation Speech
By Grace Wehniainen
Joe Alwyn Reacts To Taylor Swift Earning An NYU Doctorate In A Rare Interview
By Jake Viswanath and Nicole Pomarico
Harry Styles Addresses The Theory That His New Song "Daylight" Is About Taylor Swift
By Jake Viswanath
Get Even More From Bustle — Sign Up For The Newsletter