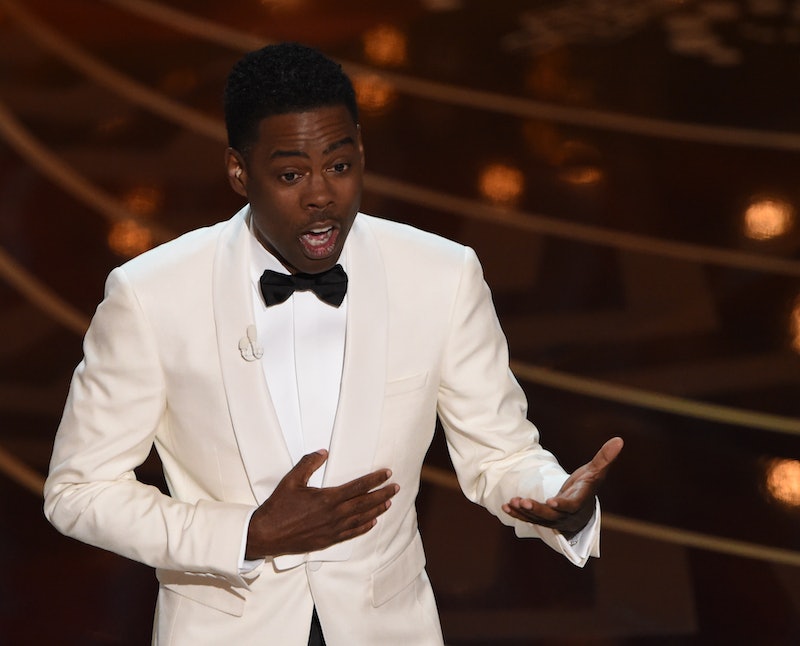 By and large I agreed with most of Chris Rock's jokes during his Oscars monologue. But, there was one subject he tackled that I believe he got wrong. Chris Rock addressed #AskHerMore, and he was trying to make a good point, but I also think he messed it up. I certainly don't believe Rock was trying to undermine the point of #AskHerMore, which is a campaign dedicated to asking women on the red carpet more interesting questions than just who they're wearing. But, when Rock joked that of course women are getting asked about what they're wearing more than men, since men are all pretty much wearing the same thing, he got it wrong.

Another big thing tonight is, you’re not allowed to ask women what they’re wearing anymore. It’s a whole thing, "Ask her more." You have to "ask her more." It’s like, you ask the men more. Everything is not sexism, everything is not racism. They ask the men more because the men are wearing the same outfits. Every guy is wearing the exact same thing. If George Clooney showed up with a lime green tux and a swan coming out of his ass, someone would go, "Hey, what you wearing George?"

I get that men are all pretty much wearing black tuxedos. But, what women are wearing isn't really the issue at hand and neither is asking them what they're wearing since many designers require the shoutout in exchange for lending the ladies those dresses. But, #AskHerMore is about, well, asking more in addition to that. It's not about never asking about the clothes, it's about not making their clothes the center of the conversation while men are asked about things like their acting practices, what they think about world events, and more. The Representation Project, who originated the movement, released this statement to Bustle on Rock's joke:

Chris Rock touched on important subjects in his monologue, including #OscarsSoWhite and #AskHerMore. Jokes aside, sexism is a very real issue issue in Hollywood. In an industry where only one-third of speaking characters in films from 2014-2015 were female and only 28.3 percent of speaking characters were from underrepresented racial/ethnic groups, we have a lot of work to do. Representation on-screen needs to match our population before we can dismiss #AskHerMore as silly fodder. Surely at the Academy Awards, we can talk about women in ways that celebrate their artistic achievements and do not reduce them solely to their looks, beauty, and sexuality. #AskHerMore suggests that reporters can ask about the dress, but also that a woman is more than what she wears.

So, no, not everything is sexism, but ONLY asking women about their clothes while asking men about their opinions is sexism. And, that's what #AskHerMore is trying to fix. Poking fun at it is unnecessary, and, honestly, damaging to the movement. Rock made a lot of good points in his monologue, but, unfortunately, this wasn't one of them.

More like this
Yes, You Can Stream ‘To Leslie’ In The UK Now
By Sam Ramsden
Paul Mescal’s Family Celebrated His Oscar Nomination In The Sweetest Way
By El Hunt
What Is Mary J. Blige’s Net Worth? The 9-Time Grammy Winner Is Doing “Just Fine”
By Hugh McIntyre
Twitter Is Overjoyed By Angela Bassett’s Record-Making Oscar Nomination
By Maxine Harrison
Get Even More From Bustle — Sign Up For The Newsletter
From hair trends to relationship advice, our daily newsletter has everything you need to sound like a person who’s on TikTok, even if you aren’t.