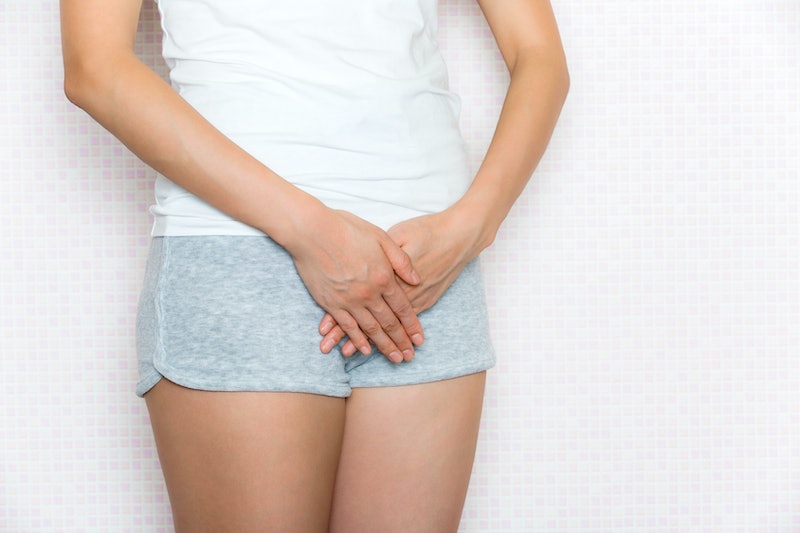 It seems like everyone and their mother is talking about intrauterine devices (IUDs) these days — though the IUD, a widely used form of birth control, has been commercially available in a variety of forms since the early 1900s, it has been quickly rising in popularity over the last 10 years. According to the Guttmacher Institute, more than 3.8 million American women are currently using an IUD — that's 6.4 percent of women in the U.S. between the ages 15-44. Some doctors have recently been bold enough to say it's the number one birth control option out there.

That small, T-shaped device didn't fall into our laps (and uteruses) without a little drama, though. In fact, none of our favorite forms of birth control have made their way to the top without some controversy. Think of the pill — early versions of the pill included very high levels of hormones, the early trials of the pill were tested almost exclusively on women of color and non-consenting individuals with mental illnesses, and some early supporters of the pill were advocates for eugenics. Yet today, the pill is among the most used and effective birth control options out there

The IUD's path had just as many twists and turns, so gird your loins. Fortunately, the dark side of the history of the IUD doesn't affect its quality today, so no need to worry if you're a Mirena or Paragard user: today's IUD designs are far different from the troubled designs that first put the IUD in the news in the '60s

Here are five things about the history of the IUD you probably didn't know.

1. The Precursors To Modern IUDs Were Made Of Glass And Stuck Out Into The Vagina

In the late 19th century, intrauterine devices called "stem pessaries" were introduced. They were made out of glass or metal, and shaped like mushrooms. The "stem" part of the device often had two "arms" that were held together by gelatin, which dissolved after the insertion process was over, allowing them to spread apart once the device was inside the uterus. The other end of the device was a disk that fit like a cap in the upper part of the vagina. Yup — these proto-IUDs hung around in both the vagina and uterus.

At this point in the history of humankind, people didn't have much access to flexible materials, so stem pessaries were made of a variety of rigid materials — sometimes, they were even made with gold. Combine that with the lack of sterile equipment and antibiotics, and women who used them faced a whole heap of dangers, from serious infections to complications in childbirth.

2. The First IUD Noted In A Medical Journal Was Made Of Silk Worm

The turn of the 20th century saw the release of a new and improved version of the IUD made of silk worm guts. A German doctor named Richard Richter created the device, and although it was recorded in a medical journal in 1909, it didn't really take off until the 1930s. Two other physicians, Ernst Grafenberg and Tenrei Ota, wrapped the IUD in a silver wire so it could be detected in X-rays, and it became better known in the medical community.

Then a little something called World War II happened, and the doctors' efforts came to a crashing halt due to a lack of funding. Dr. Grafenberg, however, continued to conduct research on his own, though some of it was considered quite controversial. He traveled through Canada, Australia, and England with his new IUD, which was made with copper, zinc, and nickel rather than silk worm. However, it wasn't the reproductive health revelation that he may have hoped it would be — it caused pelvic inflammatory disease in many women.

3. There Was A Deadly IUD In the '70s Called The Dalkon Shield

A large international nonprofit called the Population Council, whose main purpose was to develop new methods and theories to control population growth around the world, held their first annual International Conference on Intrauterine Contraception in 1962. At that conference, the council (which was comprised primarily of men at the time) encouraged distribution of the IUD in an attempt to prevent pregnancy and lower population growth around the world. Dr. J. Robert Wilson's opening statement at the conference proved unfortunately prescient about the harm that this hurried distribution of new, relatively untested models of the IUD would create: "We have to stop functioning like doctors, thinking about the one patient... perhaps the individual patient is expendable in the general scheme of things."

What came next was the Dalkon Shield, an IUD that had lateral spikes and a "tail" on it. The Dalkon Shield was derived from the design of the Incon Ring, an IUD developed at Johns Hopkins in the 1960s that resulted in high expulsion rates. The Dalkon Shield's spikes and "tail" (which made it resemble an ominous crab) were designed to keep it from being expelled like the Incon — however, its spikes dug into the walls of the uterus, making it extremely difficult to remove when women wished to stop using it and leading to infections.

Even though the first trials of the Dalkon Shield showed a 60 percent discontinuation rate among women who tried it, that information wasn't included in the study's final report and the Dalkon Shield was manufactured, eventually being used by 2.5 million American women. 18 women died as a result of Dalkon-related complications; over 200,000 were injured with serious infections or loss of fertility. Finally, the FDA recalled the device in 1974, and more than 12,000 lawsuits were filed against the creators of the Dalkon Shield from women who had been injured by using it. Because of all this, the reputation of the IUD was stained by the Dalkon Shield for a very long time after the device was pulled off the market.

4. The IUD Wasn't Officially Recommended By U.S. Doctors For Young Women & Teens Until 2012

The Dalkon Shield made many, many people extremely wary of IUDs for the next few decades to come; in 1995, less than one percent of U.S. women were using IUDs. Many of the myths we hear about the IUD today can be linked back to the disasters that the Dalkon Shield caused thousands of women. But by the time the '90s hit, a much safer version of the IUD became available, and became popular in Europe: it was a simpler T-shape, and made with softer plastic, so that it did not create many of the problems that the Dalkon Shield did.

Despite the increased safety of the new T-shaped IUD, experts in the U.S. were very cautious about recommending it to patients as a form of birth control. Though vastly improved, the new IUD wasn't perfect: the device didn't fit every woman's uterus perfectly, and it still caused heavy bleeding and cramping as side effects for some women (side effects that many IUD users still face today). But after watching many years of safe IUD use in Europe, U.S. regulators gave the new IUD the green light in 2000, but only for use by monogamous women who had already given birth previously.

The next decade proved to be quite the good one for the IUD, and the fear that the Dalkon Shield had left in the minds of the American public was slowly being swept away. In 2012, the American College of Obstetricians and Gynecologists officially announced their stamp of approval for IUDs to be used by the general population, not just monogamous women who'd already had children. Cue the fast rise in IUD popularity.

5. There Has Never Been An IUD Design Credited To A Woman

This isn't too much of a surprise, considering the fact that men have dominated every arena of the medical field for so many years, but it is still pretty unfortunate. Dr. Jack Lippes, a prominent figure in the creation of safe IUDs, recalls that, in his memories, every single person who played a role in the creation of IUDs was a male. This may well be why women's wellbeing and ease of use were not prioritized in early IUD designs.

Luckily, we now live in an age where the IUD is one of the most effective, least risky forms of birth control available to women. And risky designs not created with women's health in mind are definitely a thing of the past.

More like this
How To Fight For Reproductive Rights, Based On How Much Time You Have
By Courtney Young
So You're Having A Medication Abortion
By Dana Smith
Olivia Rodrigo’s Song Dedication To 5 SCOTUS Justices Sent A Strong Message
By Grace Wehniainen
16 Novels That Paint A Realistic Portrait Of Abortion
By K.W. Colyard
Get Even More From Bustle — Sign Up For The Newsletter