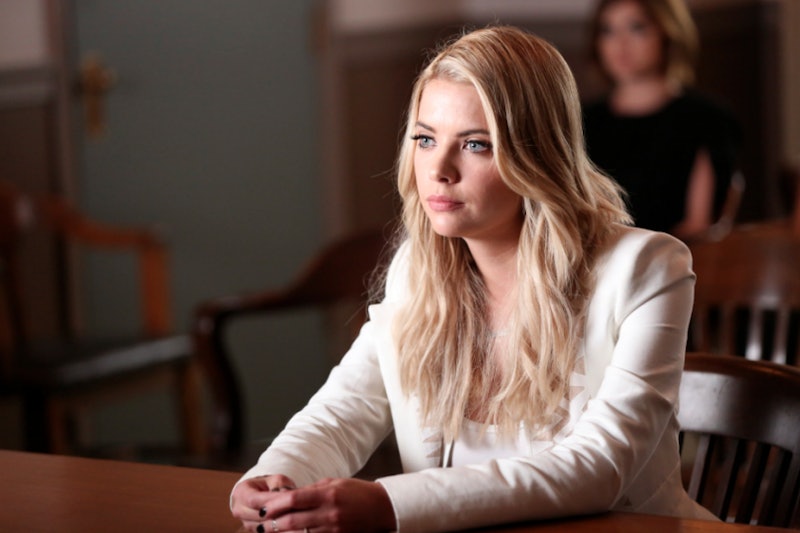 We're only two episodes away from the Pretty Little Liars Season 6 finale, and though we won't find out the identity of the so-called Uber A who is torturing the girls this season, Pretty Little Liars showrunner I. Marlene King revealed on Twitter that we will get one step closer to his — or her — identity. That's good news for our Liars, because they have already been through the ringer with this new A, who is far deadlier and more devious than Charlotte or Mona ever were. Uber A already tried to burn Aria's face off (yikes!) and, in the new promo for Tuesday's episode "Did You Miss Me?," it seems that the other Liars are also suffering from "mysterious accidents" clearly caused by Uber A. This A means business, and they won't stop until someone brings forth Charlotte's murderer. If you watched the promo, you might think you know who it is — Hanna confessed to killing Charlotte, which is as jaw-dropping a reveal as anyone could expect from the show. So, is it legit?

Most likely, the answer is... no way. But that doesn't mean we can't speculate why Hanna might be spilling about Charlotte's murder, even if it didn't happen by her hands. Here's Hanna's so-called confession...

...and here are a few reasons why she might actually be making it up:

1. Hanna Is Trying To Lure Uber A Out

If Uber A wants a murderer, the Liars will give them a murderer. Hanna and the other girls are clearly under attack in this episode, so it's only logical that they would try to smoke the new A out. Hanna probably took a few theater classes in college, hence the ability to cry on cue.

2. Hanna Didn't Kill Charlotte, But She Knows Who Did

Maybe Hanna didn't kill Charlotte, but she found out that someone close to her — like, say, Jordan or her mom — did in order to protect her. Confessing to Uber A might seem easier for Hanna than letting Uber A come after the people she loves.

3. Hanna's Twin Confessed To The Murder

While we don't know who has a twin on the show, King stated on Twitter that someone does have an identical twin, and that we would find out who the double is in Season 6B. There are a few reasons why Hanna is a good fit for who has the twin: Hanna is the one who was told the murderous twin story in the Halloween episode "The First Secret," and it's Hanna's mom who is confronted by the ghost girl in the Halloween episode "This Is A Dark Ride." Perhaps it's a hint that not only does Hanna have a twin, but it's her twin who killed Charlotte.

4. Hanna's Confession Is A Dream

Maybe the "confession" is just a dream sequence brought on by the anxiety that the Liars have about Uber A and Charlotte's killer. Of course, in this context, it's more nightmare than dream.

I'm sure there's no way Hanna really killed Charlotte — but we need an explanation from this little Liar ASAP.