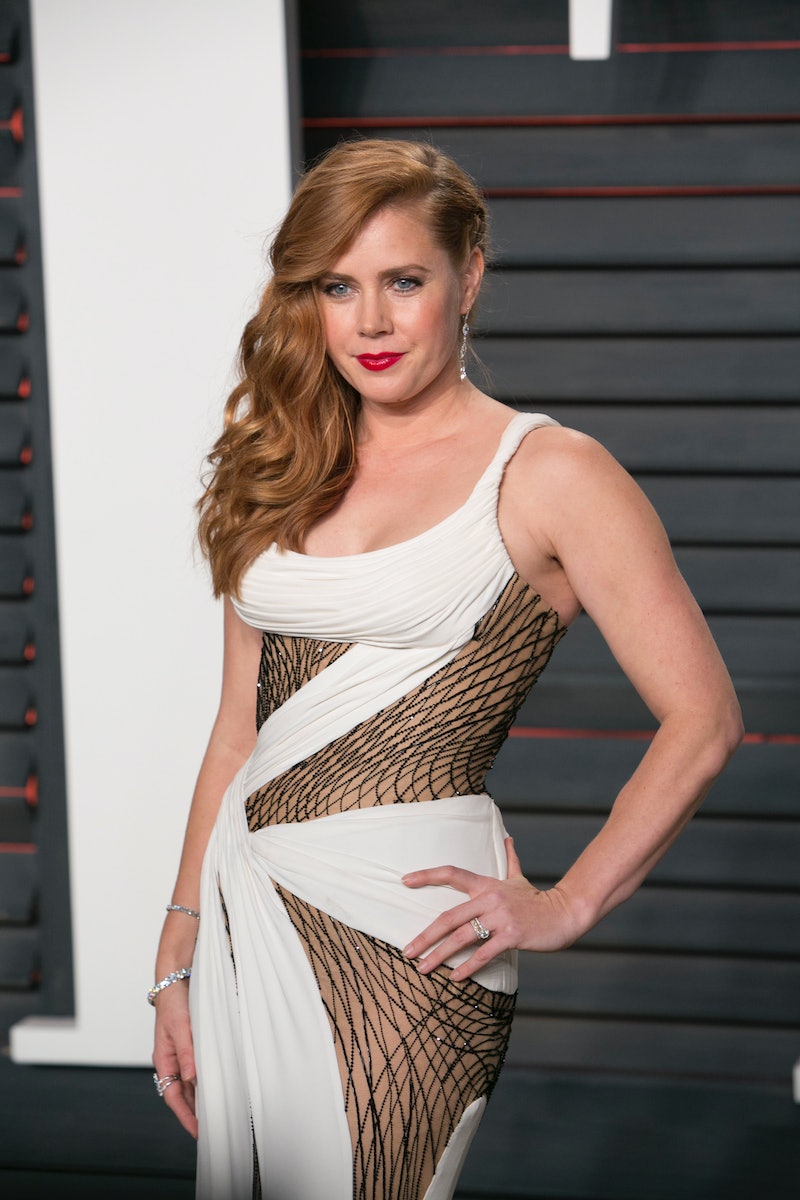 It might be 2016, but the pay gap between men and women is still a very real issue, and those in the entertainment industry aren't exempt from that. After the salaries of the stars of American Hustle were released during the Sony hack of 2014 and revealed that the female stars of the movie were making significantly less than their male costars, Jennifer Lawrence wrote an essay on the wage gap and how important it is to fight for what you deserve, especially as a woman in the workplace. But now, the other female lead in the movie is finally talking about it, too, and she has a decidedly different opinion on the matter. In the April issue of British GQ, Amy Adams admitted she knew she was paid less than her male costars all along, but she decided to do the movie anyway.

It's pretty surprising to hear this, because as Lawrence wrote in her essay for Lenny, she was totally unaware that she and Adams were being paid seven percent of the film's talent budget to Christian Bale, Jeremy Renner, and Bradley Cooper's nine percent until the hack happened, and when she did find out, she was angry. But what Adams is saying now gives a completely different perspective — she knew about the difference, and chose to do the movie in spite of that.

I know what you might be thinking: How can she not care? But it's not that she isn't upset that she, as a woman, received a smaller paycheck than the men who worked on the same movie — it just sounds like she's accepted that it's something that's going to happen if this is the career she's going to have. It sucks, and it needs to change, but it's reality.

Yeah, I did. I didn’t speak about it before and I’m probably not going to speak about it forever, because I disagreed with... not Jennifer per se, but people who had opinions on how women should go about negotiating. The truth is we hire people to negotiate on our behalf, men and women... I knew I was being paid less and I still agreed to do it because the option comes down to do it or don’t do it. So you just have to decide if it’s worth it for you. It doesn’t mean I liked it.

Lawrence made so many amazing points in her essay, and it's hard to believe that any woman — especially one who was directly affected by the situation in question — would want to put up with that kind of unfair treatment from their employer. But Adams is making a good point, too. Like she says, as an actor, she hires people to negotiate for her, which means it's not her job to make sure she's getting paid what she deserves. Should it be her job? Some people might think so, but for Adams, it sounds like this is working for her.

Besides, in any career, it can be important to know how to pick your battles, and it sounds like that's the philosophy she's adopted. If she's offered a job that she really wants, and that paycheck is what they'll offer her, then it's totally Adams' prerogative to take the role if it will benefit her creatively or to further her career in the direction she wants it to go in. Sometimes, if you decide it's worth it, you fight. Sometimes, you take the hand you're dealt and you don't need to explain or validate that choice to anyone. I can respect that, just as much as I can respect that Lawrence refuses to put up with receiving a smaller paycheck than her male counterparts.

And Adams is in no way saying that women shouldn't speak up when they feel like they're being treated unfairly. In fact, later in the interview she applauds Lawrence for finding her voice, no matter what people think. "I’m really proud of Jennifer," she added. "What I liked is that it was not necessarily about getting paid, or not getting paid… It’s like we [women] have been conditioned to not be controversial, to not cause problems. It’s about finding your voice."

That's what Lawrence's essay was really about — not just the fact that she was being paid less, but that women are expected to avoid creating conflict and instead find a way to give their opinion "in an adorable way," without being taken seriously. How important it is for us to find our voice and talk about what matters and be heard in the same way men are is the real point Lawrence was getting at, and that's a sentiment that Adams definitely agrees with.

And as long as people like Lawrence continue to stand up for what they think is right, we will continue making progress on closing that gap for future generations of actors and artists. Should the gap exist? No. But there is more than one option for the way actors choose to combat it.