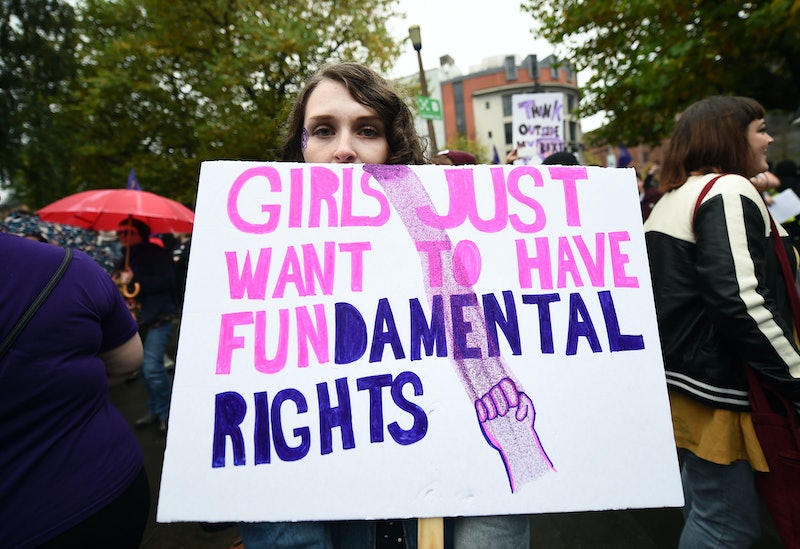 Over the past five years, more and more state laws have been popping up to limit abortion access. But is this legislation having its intended effect — that is, to stop abortions from happening all together? Probably not. In a recent New York Times article, Seth Stephens-Davidowitz uncovered a pattern indicating the contrary: Internet searches for information on self-induced abortions have increased as reproductive rights have decreased. Actual rates of DIY abortions are hard to come by, but the fact that people appear to be thinking about them more still tells us something.

The Guttmacher Institute pinpoints 2011 as the beginning of a series of crackdowns on abortion in the United States, with 92 provisions in 24 states enacted to restrict access to abortion services. These laws include bans on abortion after 20 weeks (though a court ruled last year that abortion must be legal for up to 24 weeks), mandatory pre-abortion counseling followed by waiting periods, required ultrasounds before abortions, and prohibitions on insurance companies' coverage of abortion.

According to Google search data obtained by Stephens-Davidowitz, 2011 was also the year that searches for “how to have a miscarriage," "how to self-abort," and related topics spiked most drastically. The rates of these searches began rising in 2008 and peaked in 2012, with 700,000 searches last year.

But could people have been looking for self-induced abortion methods all along and just be more likely to turn to the Internet for that information now? If that were the case, these searches would be increasing at the same rate everywhere — and they're not. They did not experience any spike in Canada, which has not been cracking down on reproductive rights in recent years. And within the United States, the rise in searches has been state-dependent, with more searches coming from the regions with the most abortion restrictions. Mississippi, for example, experienced the most searches, and there's only one abortion clinic in the state.

This data suggests that state governments' recent efforts to decrease abortion rates may really only be driving them underground. This theory would be corroborated by a World Health Organization and Guttmacher Institute study, which found that countries with more abortion restrictions are home to more unsafe abortions and don't have fewer abortions overall. According to the Guttmacher Institute, abortion rates are highest in areas like Latin America, where the procedure is illegal, and lowest in Western Europe, which has fewer restrictions.

Laws to limit reproductive rights don't tend to work because when someone seeks out an abortion, they've often reached a point where they'll do anything to end the pregnancy, even if it's dangerous or illegal. So rather than pretending that abortion is a careless act that people won't choose to engage in if it's not available or if they receive counseling followed by a 72-hour waiting period, governments need to acknowledge that choosing whether or not to become a parent is a need and a right — and attempts to take away that choice will only lead more people to take desperate measures to retain it.