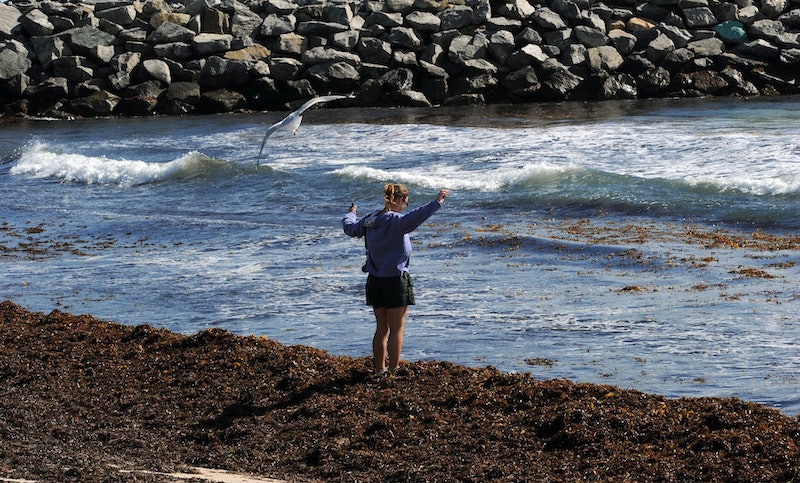 I was born Elizabeth Anne Mullins. Some twenty-five years later, I assumed the professional name Liz Furl, in anticipation of my then-upcoming wedding. And now, two years later, I go by Liz Lazzara, and will soon take legal measures to get that name on my social security card.

It’s rare that a woman assumes so many names in the course of twenty-seven years. Usually a woman is born with one surname — her maiden name — and then, if she chooses to marry, she can then decide whether or not to adopt the surname of her partner, to hyphenate both their last names, or, on rare occasion, to combine both partner' last names into a new one. Rarely is there ever another option.

But I’m making one for myself, in the hope of taking an identity that empowers me as a woman. One that celebrates my heritage. And one that has nothing to do with typical surname-wielding men.

Mullins is my father’s last name. I renounced him as my father nine years ago. Two prominent women in my life refuse, as I have, to ever see him again. He's tried to track me down against my will, making one of his girlfriends reach out to me. I've heard stories about why my father acts the way he does: a violent childhood home, a repressed identity which he expresses through domination over women, a complete lack of empathy for living things. I don't know the truth of the matter, but I know his character, and it scares me.

But in spite of all this, I was given “Mullins” as part of my identity because my mother was married to my father when I was born. Both of us still bear his last name legally, mainly because I didn’t want my mother to revert to her maiden name when I was young. I didn't understand what sort of man my father was yet, and I felt it'd be embarrassing for my mother to come to parent-teacher conferences and such, introducing herself as "Lazzara" when I was still "Mullins." I wanted us women to be united in name as a family.

That changed when I became engaged to my husband. I started my writing, editing, and podcasting careers under the name Liz Furl, knowing that after we were wed, I would want to ally myself with my fiancé’s clan. I loved the idea of my fiancé and I combining ourselves under a common name. I also loved the idea of ridding myself of my father’s name that rang only with the sound of detestation. I made the decision to be Liz Furl because I wanted to create solidarity once more — this time with my husband, rather than with my mother.

However, when my husband and I separated some eight months ago, I once again reflected on my surname. Reverting to Mullins seemed impossible. My father has a habit of tracking me down, and I didn’t want to make that any easier for him. Keeping Furl seemed just as unlikely — if my husband and I were bound for divorce, why would I continue to bind myself to him and his family?

Instead of choosing either option on this supposed binary, I settled on something else: Lazzara, my mother’s maiden name.

It’s something I have considered since college, once I began to know myself and my family, but I never felt ready to solidify it until now. As a writer, and (hopefully) soon-to-be author, Elizabeth/Liz Lazzara is memorable. It trips off the tongue nicely. It’s a solid name for a solid career.

More than that, though, Lazzara celebrates who I am as woman. It’s a tip of the hat to my heritage. I’m definitely a “mixed breed” of European ancestry, but what comes across most when you look at me is my Italian — more specifically, Sicilian — heritage. I have the dark, nearly black hair. I have the long face and prominent nose. I have the brown-green eyes that often dominate Sicily. I have the curvy hips, thighs, and butt. I even have the pesky body hair.

Lazzara owns all of that and loves it, just as I do.

Using that name also allows me to connect to the family I have, the family I love. My father’s family are all strangers to me. I don’t dare keep in touch with them out of fear, but we weren’t all that close anyway. To be frank, I’m not close with my mother’s siblings or their children, either. But I did love my mother’s parents dearly, especially my grandfather, my Pépère.

Of all the men in my family, of all the influences I looked to when I was growing as a girl, my Pépère was the most wonderful. He adored his grandchildren, and, as the youngest grandchild, I believe I held a particular soft spot in his heart. He was a gentle man who would feed squirrels on the smoking patio of his apartment. When he got Alzheimer’s Disease, he did not become violent, as many do (without any fault to themselves), but instead sweetened — he would sing “I’m My Own Grandpa” in the hallways of the psychiatric unit, celebrated his wedding anniversary with genuine joy, and bore memory loss and confusion with grace.

He died when I was thirteen, and I deliberately chose not to see him when all traces of his personality were gone, deciding to preserve him in my memory as a great man.

I wanted my choice of last name to have nothing to do with men, to shake off the patriarchal traditional of women being saddled with their fathers’ and husbands’ names instead of keeping or inventing their own. But I know that this can only be accommodated so far. Taking my mother’s maiden name means taking on her father’s last name. Taking my Mémère’s (my mother’s mother) maiden name means taking her father’s. I could go back through my family tree forever, and never find a name completely free of men.

One generation feels like enough, though — especially when the surname in question belongs to a man whose father came to America from Sicily, who gave to me generously, who I always wish I could introduce to the men in my life in lieu of a father. Sadly, he is gone, but I ensure he lives forever through the name I take: Lazzara.

The beauty of the name is not lost on me. It’s an old name, originating in Aramaic, the language of the Bible. It comes from the given name “Lazar,” which is a form of the Hebrew name Elezar. The translation, rough as it may be, is “God has helped.”

I’m not a believer. Throughout my life, I transitioned from vaguely Christian to agnostic to atheist, which is where I believe I’ll stay. Still, the idea of carrying a message of divine assistance and grace with me, of making it part of my identity, appeals. I have struggled with poverty, with mental illness, with estrangement, abuse, and challenges within my own heart. I may not believe in God, but I could certainly use His help.

As of a few days ago, my divorce papers have finally been filed. The separation I began on in August will finally come to legal fruition, and I'll no longer be a Mrs. It may be too early, or I may be too jaded to believe that I'll never marry again, but if I do, I won't pick up my husband's mantle. I will not gather my identity under his name. Instead, I’ll move forward as Liz Lazzara: the woman who rid herself of an abhorrent father, the woman who can be an equal partner in her marriage without erasing her legacy, the woman who confidently owns her heritage, the woman who finds her own role models.

But, most importantly, the woman who makes her own blessings.