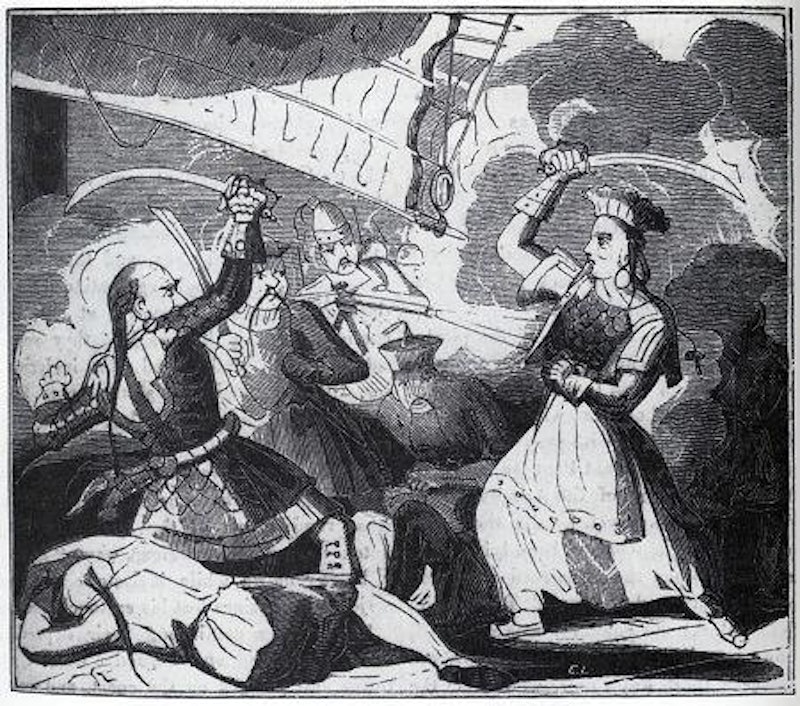 In 2012, a crowdfunding campaign launched by Anita Sarkeesian sought to fund a video series analyzing the representation of women in video games. That series, of course, is Feminist Frequency's Tropes vs. Women in Video Games. After raising many times more than its goal, the project has become a nonprofit organization devoted to critically engaging with media. Today, Sarkeesian and her team are tackling new territory with another crowdfunding campaign. They're seeking to fund Ordinary Women: Daring to Defy History . It's an exploration of women throughout history who have decimated gender stereotypes and contributed to humanity in truly impactful ways. The series will seek to remind us not only that these kinds of women — the rabble-rousers, the undercover reporters, the activists, the pirates — are extraordinary individuals, but also that women doing extraordinary things is actually quite ordinary. And that's a good thing. Here's why.

Women kicking ass and taking names shouldn't come as too much of a surprise, because we've been here all along, propping up society with our accomplishments. Unfortunately, the telling of history has a way of being whitewashed, male-focused, and more, excluding the contributions of far too many women, people of color, LGBTQ people, and other marginalized groups. With this new video series, Feminist Frequency hopes to address that glaring imbalance by bringing to life the stories of some of history's most rebellious and remarkable women.

The absence of women from the global narrative has directly affected the way women in society are viewed and valued. Furthermore, not having female counterparts in history to identify with and look up to is profoundly diminishing for young women and girls. Women have been doing revolutionary things since the dawn of time — they just haven't always gotten due credit.

So how can you help get this ever-so-relevant project off the ground? Feminist Frequency is currently working on raising the funds needed to produce the series, accepting donations via Seed & Spark. Rewards for kicking in some cash now include everything from a digital version of the series' soundtrack all the way up to a meet and greet with the women behind Ordinary Women. If it goes as planned, we'll all be learning about the insanely cool accomplishments of women in history by September.

In the meantime, join me in geeking out over a few of the fem-pioneers the series will devote entire episodes to come this fall (and hopefully beyond). As Sarkeesian so aptly puts it, "In a world that was designed to silence and diminish them, they had to be more than just talented. They had to be defiant." If that doesn't merit a hell yeah, I just don't know what does.

Ching Shih started in a brothel before rising to prominence as the revered commander of one of the largest pirate fleets of all time.

Talk about overcoming your circumstances! Ida B. Wells was born a slave, but pushed back against the system, becoming a daring investigative reporter responsible for exposing the horrors of lynching in the post-Civil-War South.

It's a certain shame that Murasaki Shikibu isn't a household name, considering she penned the first modern novel. Like a boss.

What's that they say about well-behaved women? Oh yeah, they rarely make history. Well, suffice it to say that Emma Goldman wasn't a well-behaved woman. Her "radical" ideas about gender and individual freedom earned her the label of one of America's most dangerous women.

When Ada Lovelace's doctor patronizingly explained that her feeble mind could not handle advanced math, she kindly DGAF and went on to write the world's first computer program. Hey Doc, please take all the seats.

More like this
Sandra Bullock, Girlboss Extraordinaire
By Matt Harkins & Viviana Olen
The 'Hocus Pocus' Sequel Finally Has A Release Date & It Makes Total Sense
By Shannon Barbour and Radhika Menon
How The City Healed Five Years On From The Manchester Arena Attack
By Ella Glover
Starbucks' Summer Menu Includes A New Chocolate Cream Cold Brew
By Emma Garza
Get Even More From Bustle — Sign Up For The Newsletter