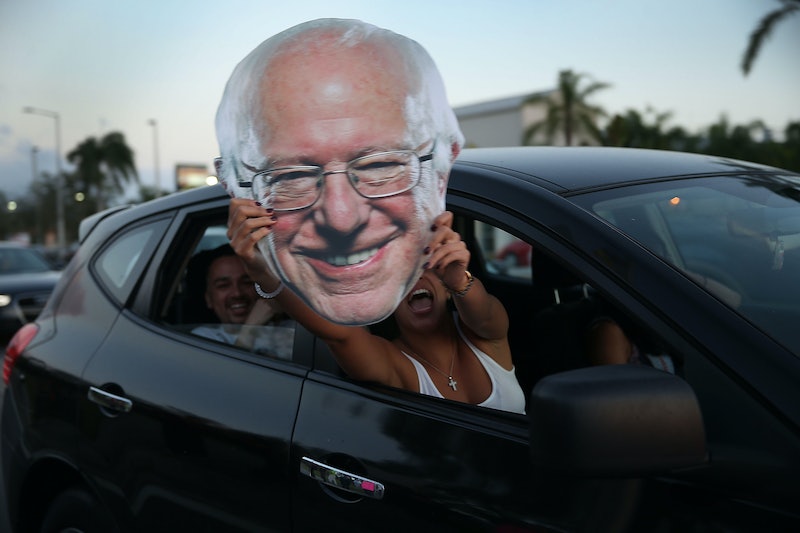 The eighth Democratic debate took place on Wednesday night at Miami Dade College, less than one week before the Florida primary, and with journalists Jorge Ramos and Maria Salinas serving as moderators for the Washington Post and Univision-hosted, Latin pride shined at the Democratic debate. The pair opened the debate by addressing the crowd and national audience in Spanish, before announcing that Mexican American teen singer Sebastien de la Cruz would perform the national anthem. The event marked a stunning celebration of an important demographic juxtaposed with hard-hitting questions about the issues facing one of the largest voting populations in the United States.

This Democratic debate stands as one of the most meaningful I've covered, especially as a Latina woman passionate about politics. It's certainly the first to include heartrending statements from an audience member whose husband suffered the consequences of rampant deportation policies in one of the most visceral debate moments of this election season. Likewise, catering to a bilingual audience was a major test for CNN, which broadcasted the debate with English translations, while the Fusion livestream included social media stats entirely in Spanish.

To see Latin voters not only acknowledged, but also have their voices heard loud and clear was a refreshing and necessary step toward inclusion. Given the divisive rhetoric of candidates like GOP frontrunner Donald Trump, this point is especially important for underserved communities who may feel attacked and alienated by political rhetoric.

The Democratic candidates onstage certainly weren't let off the hook for their missteps, either. Clinton was asked about her alleged "Hispandering," in which she trotted out Spanglish or reversed her thoughts on immigration as a means to disingenuously cater to Latin voters. Ramos, who disclosed his daughter Paola's involvement with Clinton's campaign, launched into some of the more heated questions of the debate about her stance on immigration, which Salinas beautifully summed up when she asked whether the candidate was simply flip-flopping.

It's certainly an issue that initially had me apprehensive about supporting the former secretary of state during the 2008 election in which she ran against Barack Obama, whom I ultimately voted for. This election season has been anything but predictable, and though I initially saw myself casting my vote for Clinton, I'm now far more on the fence, leaning more toward Sanders but ultimately still open to either. The Washington Post-Univision debate was a perfect chance for voters like myself to firmly make a decision, especially when it came to Latin-focused issues and how candidates address them.

Never before have I felt so raised up and represented, even in the face of hard truths like the very real threat of climate change in Florida as well as in the state that I call home, Louisiana.

Such a debate brings me back to my roots, so to speak. Growing up, my bleary morning memories involved walking down the stairs of my parents' home prior to their divorce and greeting my grandfather, Armando Cadena. Grandpa Armando would address me from behind a newspaper, regaling me with events from yesterday and discussing politics I was far too young to fully comprehend. He had long been passionate about politics. He was once well acquainted with the mayor of San Jose, the California city where he lived for years. These kinds of formative moments would coalesce and culminate into me getting kicked out of an English class in high school as I covertly listened to John Kerry's concession speech in 2004. My grandfather died some mere months later.

Occasionally, memories such as these will creep up on me. They come up more and more as my professional life takes me deeper into politics. It's been over a decade since his passing, and I can only imagine what he would say about a debate like Wednesday's and the prominent Latin journalists at the helm. He certainly would be amazed to see Latin candidates, like Marco Rubio and Ted Cruz, on the right and all the gains that they've made. I know I'm excited and legitimately hopeful for what's to come. And that's a feeling I never thought I'd get from one of many debates this election season.