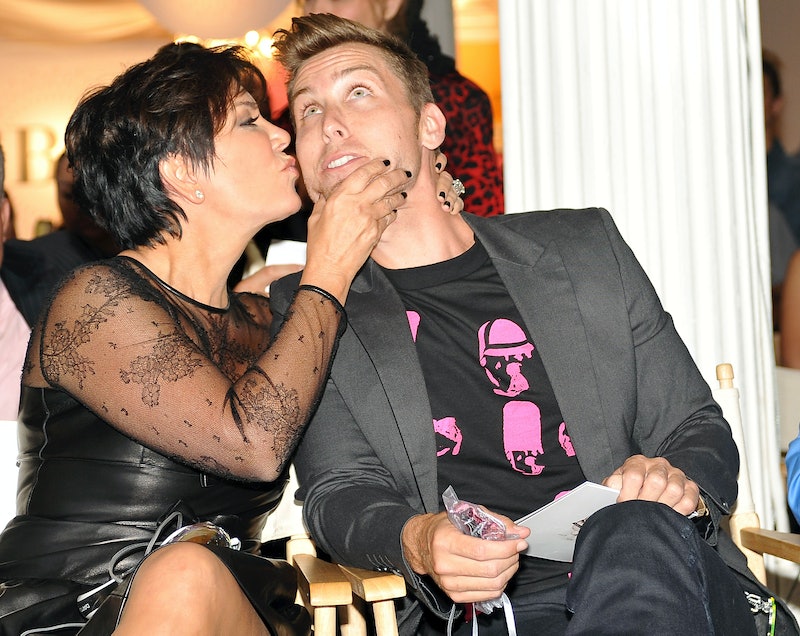 It has happened to all of us. You run into someone at a party, at the mall, or at a bar, and start talking about someone and you both realize that somehow you know the same person. "Wow, what a small world!" is one of our favorite things to say in those situations (especially if you have a tough time with small talk like I do), and it turns out that the world of Hollywood isn't that much different. Odd couples are one of my favorite things, and there are definitely some in the celeb world in the form of celebrities you never realized knew each other.

I like to think that I keep up pretty well with my favorite celebrity friendships and enemy-ships. I know all about the well known on-set feuds and celebrity squad BFFs, but there are also plenty of celebs who have some unusual friendships. Perhaps they made a film together, have the same manager, or met at some random event, but the random celebrity pairs below prove that opposites sometimes attract and that even the most publicized celebrities still have some friendships that are just as normal and random as ours.

Back in 2012, Kim K confessed her obsession with the Spice Girls (and she and her friends even dressed up like them back in '90s). And it turns out that she actually ended up befriending Melanie Brown, aka Scary Spice. Kardashian was spotted at Mel B's baby shower in August 2011, and they met up in Australia the following year. What a dream come true!

This one's a trio rather than a pair, but in April 2013, Robert Pattinson, Vince Vaughn, and Joaquin Phoenix walked into a bar... seriously. (Well, technically, a restaurant.) No one really knew why or how the unlikely trio were friends, but they all have co-starred with Reese Witherspoon and call her a friend, so maybe she hooked them all up?

I don't know why I never imagined that these two would know each other, because they're both talented and fun-loving and they actually co-starred together in the musical film, Nine. Throughout the years, they've become friends off-screen and have celebrated Halloween together and supported each other at events around town, like the launch of Hudson's Chrome Hearts jewelry collection.

Selena Gomez just keeps getting luckier and luckier. Last year, Gomez opened up about her friendship with Jennifer Aniston, who she met through their mutual management. Turns out, Aniston and Gomez like to make dinner when they're together. Gomez shared, “She has a pizza oven... Like, we've made pizzas at her house."

Talk about random. Last September, fans were confused when John Mayer and Bob Saget were photographed having dinner together in L.A. And Mayer has performed at one of Saget's comedy events in the past, according to the Huffington Post. Who knew?

In May 2014, Benedict Cumberbatch and Dakota Johnson went out to lunch after meeting at the 2014 Met Gala, according to Express U.K. The two seemed to hit it off as friends right away, which is clear in Cumberbatch's funny antics, including eating with a napkin covering his entire face. These two also starred in 2015's Black Mass.

This is a comedic match made in heaven that sent everyone into a tizzy. Back in October, Lawrence was caught giving Ansari a piggy back ride after their friend Amy Schumer's Saturday Night Live hosting gig, and they shared a Valentine's Day dinner date together this year, according to People. Can we expect a project together soon? I hope!

Um, I think this is the surprising celebrity friendship that I am the most jealous of. In 2011, the Jolie and Stefani fams were spotted on a play date and Us Weekly reported that Brad Pitt had been friends with Stefani and her ex-husband Gavin Rossdale for many years.

How did the Kardashian matriarch become best of friends with an ex-member of *NSYNC? Their mutual love of reality TV, of course! Since 2009, Bass has been friendly with Kim K, and Bass made an appearance on Keeping Up With the Kardashians way back in 2012 to have dinner with Kris and the fam. Since then, they've double-dated and dirty-danced together over the years.

So, I didn't know this, but Jon Hamm and Paul Rudd used to be college friends! Rudd told Seth Meyers on Late Night that Hamm "was great at everything," and they eventually reconnected once they were in L.A. They used to have a thing for the same girl back in college, and they would hang out in St. Louis way back when, Rudd told Meyers.

I did not know these two even knew each other, but they have been spotted at events throughout the years, looking very cozy. Lohan's been to some of Ora's performances, and they celebrated Lohan's run in Speed the Plow in London, according to a snap shared on Lohan's Instagram.

Well, this just proves that Hollywood is just as weird and random as you imagine it is.