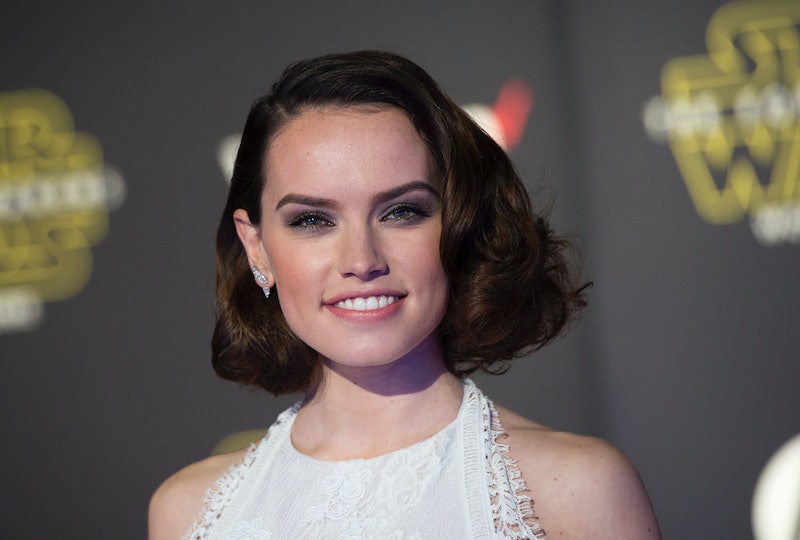 Things are looking up for 23-year-old English actress Daisy Ridley, who just two short years ago was a virtual unknown — at least on this side of the pond. Then, in April of 2014, Disney announced that the young woman had been cast as the mysterious lead character of Star Wars: The Force Awakens , perhaps the most highly-anticipated film of all time. When that film finally came out this past December, it was clear from Ridley's performance as the resourceful Rey that she was a star in the making. Proving that perception true, Deadline is reporting that Daisy Ridley may star in a Tomb Raider reboot.

The casting is far from a done deal; Deadline clarifies that Ridley is simply "in the running" and that, "while conversations have taken place, this is still very early and there have been no official negotiations or offer yet with the producers keeping their options wide open at this stage." But if the deal did go through and Ridley ended up starring as the new Lara Croft, that would be amazing new for any number of reasons.

First of all, such a huge role would likely do wonders for Ridley's career — just as it did for the former Tomb Raider, Angelina Jolie. While 2001's Lara Croft: Tomb Raider isn't what kickstarted her career, precisely (she had already won an Oscar the previous year for Girl, Interrupted), it did make her a household name and launched her to worldwide stardom. Of course, you can argue that Ridley is already a worldwide star thanks to the $2 billion+ that The Force Awakens has grossed around the globe. But her name is nowhere near "Jolie" status yet… and Tomb Raider would certainly help get it there.

Landing this role would put Ridley on a similar track as Hollywood's favorite starlet, Jennifer Lawrence, whose first big action franchise was 2011's X-Men: First Class. Although Lawrence had a prevalent role in that film, she was really just one member of a large ensemble cast — just like Ridley is just one member of The Force Awaken's large ensemble cast. It wasn't until Lawrence's next action film, 2012's The Hunger Games, that she was allowed to carry a tentpole action franchise entirely on her own two shoulders; and the success of those films is what made Lawrence a certifiable star, and the highest-paid actor in the world last year.

Furthermore, Ridley getting to carry an entire action franchise by herself would mean one very simple thing: the studio, the advertisers, the toy companies… nobody would be able to shy away from the fact that this film starred a woman. There would be no Tomb Raider posters or t-shirts without Ridley's face on them; there would be no action figure lines with a Lara Croft doll; there would be no board games without the option of playing as the Tomb Raider herself. (At least, I really really hope not.) They will not be able to erase Lara Croft from history the way that some manufacturers seemed to want to sweep Rey under the rug.

And that brings us to the last and most encouraging point: that Hollywood is bothering to reboot Tomb Raider at all. In a time when only 25.8 of leading film roles go to women — despite the fact that women make up slightly more than half of the world's population — seeing a big movie studio choose to green-light any film or franchise that focuses squarely on a woman is a step in the right direction. With films like Tomb Raider, Paul Feig's all-female Ghostbusters , and, yes, even the upcoming Powerpuff Girls reboot, perhaps we're starting to see a shift in the way that Hollywood thinks about women.

Now, some studio execs should just green-light all-female versions of these popular movie franchises and we'll call it, if not even, then at least progress. Thanks in advance, Hollywood.