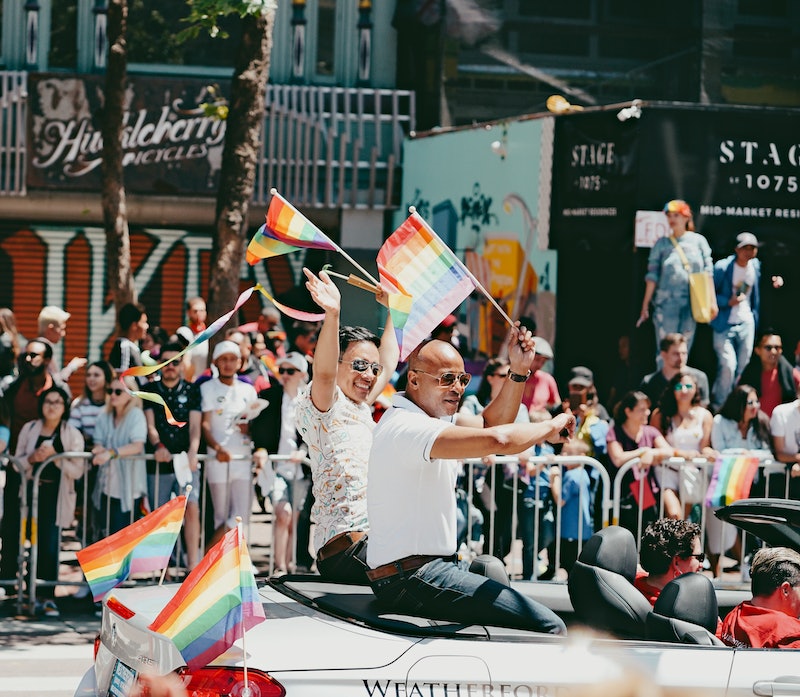 You know the traffic lights with the little man that tell you when it's safe to walk or when you should stay put? Utrecht, a city in the Netherlands, just said, "Hell naw," and changed their little man lights to precious same-sex couple walk signs — a seemingly small but impactful change to create a more inclusive, accepting culture and society. Because sometimes, it really is the little things that matter the most.

When I first read about the move to change the walk signs, right away, I thought it was not only adorable and considerate, but also such a wonderful influence. The signs are important on multiple levels: On one, the increased representation representation of KGBTQA+ individuals is always a good thing. And on another, Utrecht councilman Kees Geldorf put it perfectly: Per PinkNews, Geldorf says that the signs are meant to show that Utrecht is a "many-sided city," and they hope it will "give cause for reflection while you are waiting for the lights to change." This is not meant to be some groundbreaking, earth-shattering change like the sorts that are still sorely needed in, say, our legislature (although those changes are obviously just as important); it's simple, understated, and thought-provoking — a friendly reminder to be kind to everyone.

This had me curious what other little changes have been made to encourage us all to be more accepting of others. Here's what I found.

Utrecht isn't the only city who switched up their crosswalk lights. Last year, it was reported that Vienna, Austria was also looking to become a friendlier, safer place for everyone.

Smartphones are seriously stepping up their emoji game to become more all-encompassing. Now, we've got a variety of skin colors to choose from, same-sex couples holding hands, and families with same-sex parents. (Although we've still got our fingers crossed for a rainbow flag emoji. Hint, hint.)

3. The Rainbow Crosswalk In Utrecht

Its traffic lights aren't the only thing that make Utrecht awesome. The city also has a rainbow pedestrian crosswalk that is all kinds of fun.

4. An LGBTQ-Inclusive Kids' Book Even The Pope Liked

When Francesca Pardi wrote Piccolo Uovo (Little Egg), a story that includes gay penguins, lesbian rabbits, a single parent hippo, a mixed race dog couple, and kangaroos that adopt a polar bear, the mayor of Venice banned the book from city schools. Pardi ended up contacting Pope Francis, who sent back a rather neutral response, while still praising the author.

This pic from Adidas was so subtle, so quiet, that some people didn't even notice it depicted two women. I love how understated the whole thing is, because this is exactly how it would be if the photo were of a man and woman. Love is love. That's all.

Not only did they remove the "boys" and "girls" signs from some of their aisles, but Target also created a line of gender-neutral kids' bedding. Part of a larger move to stop unnecessarily gendering children's products, it lets kids decide for themselves what they like to play with, wear, use, and so on — without it being dictated to them via coded color schemes.

More like this
How To Fight For Reproductive Rights, Based On How Much Time You Have
By Courtney Young
10 Times Boris Johnson Got It Wrong On Trans Rights
By El Hunt and Sam Ramsden
The UK's First LGBTQ+ Museum Is Finally Opening
By Sam Ramsden
The Music Industry Continues To Fail Black Women
By Precious Adesina
Get Even More From Bustle — Sign Up For The Newsletter