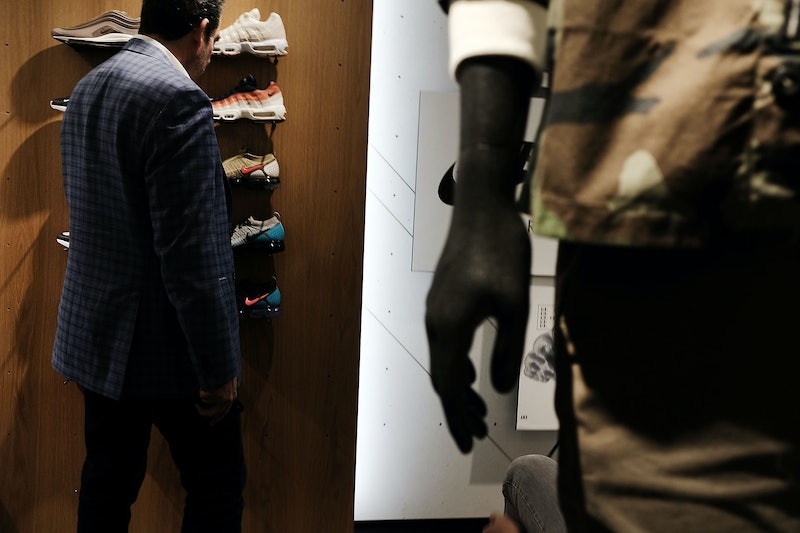 Considering the sheer amount of emphasis placed on women's bodies in our society, it's no surprise that the majority of discussions about body image center around women. We simply face different (and more numerous) pressures than men, but that doesn't take away from the fact that men struggle with body image as well. Although they may not experience the objectification, sexualization, and harassment regarding their bodies in the same way as women, men feel the pressure to be thin and athletic as well — and a recent study published inPsychology of Men & Masculinity reminds us just how damaging these unrealistic expectations are, no matter your gender.

Using data from five national studies, researchers at Chapman University analyzed the body images of more than 116,000 men to see whether there was any truth to the commonly-held belief that gay men have poorer body images than straight men. The study found that gay men tended to report lower body satisfaction than heterosexual participants, and they were much more likely to say they experienced objectification and media pressure to be attractive. However, straight men certainly aren't unaffected by societal expectations; overall, between 20 and 40 percent of men reported dissatisfaction with their bodies, including characteristics like appearance, weight, and muscle size or tone.

Men whose body mass indexes (BMI) were classified as "normal" or "overweight" generally felt more satisfied with their appearance, but those whose BMIs were considered "obese" tended to report more dissatisfaction. However, participants of all sizes and sexualities noted feeling judged by their appearance and comparing their own bodies to those of others. In fact, 20 percent of straight men with "normal" BMIs and 29 percent of "obese" men reported hiding some part of their body during sex, and 5 percent said they had avoided sex altogether in the past month due to self-consciousness about their bodies.

For gay men, these numbers were much higher: 20 percent of those with "normal" BMIs had avoided sex in the past month, and that number jumped to 32 percent for "obese" gay men. Furthermore, gay men were more likely than straight men to consider cosmetic surgery (36 percent), routinely think about their appearance (58 percent), and feel judged by their looks (77 percent).

This likely stems from the well-documented emphasis on appearance within the gay community, which manifests in things like fat phobia on Grindr or the growing prevalence of eating disorders among gay men. Although the subject has been researched in the past, the current study is one of the largest to date, and it's one of the few to compare straight and gay participants recruited by the same means.

So what's the bottom line? Women may face the most extensive societal pressures, but we're certainly not the only ones judged for our appearances. No matter your gender or sexual orientation, trying to conform to unrealistic beauty standards is emotionally taxing and, frankly, impossible. Unfortunately, learning to accept your body, flaws and all, is easier said than done — but hopefully, one day society will encourage us to love ourselves in the first place.