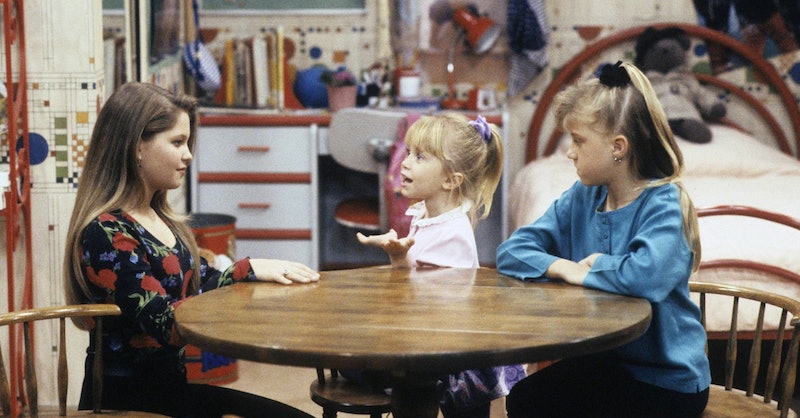 Considering it’s a show with pretty conservative family values, you probably don’t look to Full House for your daily dose of feminism... but maybe you should. Aside from the fact that the show was pushing gender norms by including a three-dad dynamic (so progressive!), we can never forget that many of the plotlines revolved around the three little Tanners and HBIC Aunt Becky. Full House is totally a feminist show if you do some digging with those characters, and I am here ready with a shovel.

OK, it’s not going to be perfect or anything. Despite it’s early ‘90s setting, I can’t exactly argue that Michelle was a riot grrrl. But the values set in Full House were set to encourage a generation of little girls to not only be good, not lie, and not drive a car through the kitchen, but also to be strong. It’s clear by watching Fuller House today that the Tanner girls have certainly benefited from their upbringing, as they're each ever-powerful and ever-supportive of one another. So, I can’t imagine what Full House did for the young girls who were actually, you know, watching.

Anyway, let’s not waste any more time. Here are a 11 feminist things you may not have originally appreciated from Full House.

She saddles Jesse up with a huge pregnancy belly, and of course he needs to be rid of it before the day is out. And that's how you get circus wallpaper for your children's nursery.

2. Also When Becky Was Basically The Bread-Winner In That Dynamic

So basically always, because Jesse's main financial contribution stemmed from the time "Forever" got big in Japan.

3. When Vicky (Remember Vicky?) Chose Her Job Over Danny

Eh, but who wouldn't?

4. When Danny Ensured Michelle That She Could Do Anything She Dreamed Of

She feels discouraged that she can't go go-karting because she's a girl, but Danny says that she can build cars just as much as Joey can do ballet (wait, what?). "As long as you’re not hurting anybody, you can do anything you want to do," is his advice.

5. And Then When Michelle Slayed In Go-Karting Against That Asshat Kenny

Basically acting as a young Danica Patrick and proving that girls could do just about anything boys can.

It's admirable to see D.J. stick to her principles and not drink, but it's even more admirable that, even when she was annoyed and disgusted with her friend, she made sure she was all right. That's true sisterhood, considering Kimmy's, like, not her sister.

It takes work to make a bond that long last, guys. And they put in the effort as one of the longest-running female friendships in television history. That's insane!

8. And When D.J. Tried To Foster A Friendship Between Stephanie And Kimmy

This backfires completely because they end up bonding over their mutual annoyance with D.J., so... that part maybe isn't so feminist. But on D.J.'s part, building bridges between women is such an important thing, and, in the long run, it worked out. They're tangoing and making out on Fuller House these days.

9. When Stephanie Tries To Take Control Of Her Life By Making A Strong Statement Against Her Neglectful Uncle-Dads

OK, so this one is a little tricky too, because she thinks the only way to break out of the full house is by marrying her friend Harry at the age of, what, five? Marriage-as-an-escape isn't necessarily the shining feminist moment on its own. But, while misguided, it's also impressive slash adorable to see that Stephanie tried to establish some semblance of independence when she felt ignored. Bold power move, Steph. Bold power move.

10. When Aunt Becky Tells Jesse To Chill About Forcing Strict Gender Roles On The Twins

All they want is to play with a baby doll, and Jesse tries to load them up with monster trucks and karate action figures. Becky rolls her eyes on the way Jesse needs to impose all this machismo on these literal toddlers, and remarks, "I want Nicky and Alex to have a full range of experiences and grow up as well-rounded human beings." Preach.

11. When D.J. Breaks Up With Steve Because She Feels Like Her Relationship Is Stagnating

She doesn't even really know who she is anymore, and she ends it half to reclaim that identity. As hard as it is, she even knows that she'll be OK in the end. And she is OK; she becomes a veterinarian with three beautiful children while Steve grows up to be... still in love with D.J. Womp womp.

We're scratching the surface, but, sure enough, there it is: hidden feminism in the Full House.