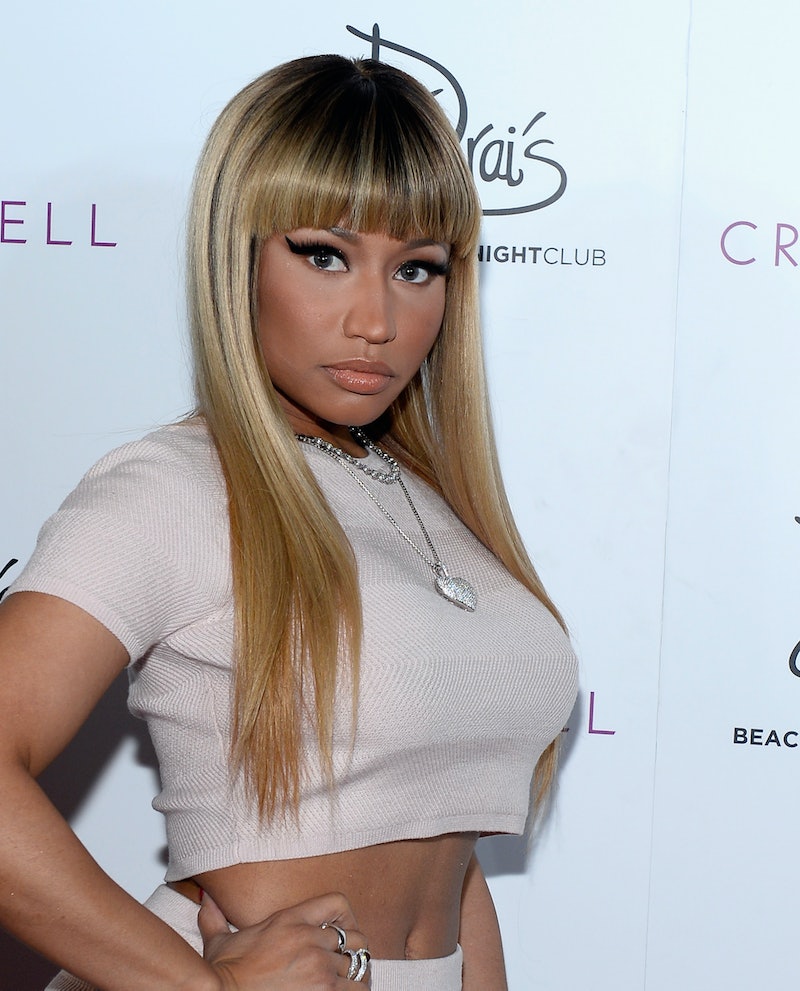 She's kept a fairly low profile since the "Miley, what's good?" heard 'round the world in August 2015, and her fans are desperate to know: When is Nicki Minaj releasing new music? The 33-year-old rapper's last album, The Pinkprint, just came out in December 2014, and sadly, information about her next project is still relatively scarce. Bummer. Fortunately, however, Minaj frequently hops on other artists' records (her remix of Yo Gotti's "Down in the DM" just premiered at the beginning of February), and it looks as though she might have a few new features coming down the pike.

For example, on Thursday, Minaj posted two videos of herself listening to an unreleased song on Instagram. In the caption for the first clip, she hinted that the tune is called "Remember Me," and tagged up-and-coming rapper/songwriter/producer Parker Ighile. So, what's going on here? Is Nicki Minaj releasing a track called "Remember Me"?

Here's what we know: Ighile is a 26-year-old British musician who first worked with Minaj on Pink Friday: Roman Reloaded — The Re-Up EP in 2012. In 2013, he was signed to Minaj's record label; and in 2014, the pair collaborated once again on The Pinkprint. (He's worked with other big stars like Rihanna and Ariana Grande, as well.) Check out Minaj's aforementioned Instagram videos below.

A YouTube search reveals that "Remember Me" has been online in some capacity since at least May 2013 — and it appears as though it could be Ighile's song, not Minaj's (she's often credited as a featured artist). So, although "Remember Me" has never been officially released, it's not new. Why is Minaj calling attention to it now? Your guess is as good as mine! Hopefully, we'll find out soon.

But, even if "Remember Me" doesn't end up panning out, there's no need to despair: Minaj is featured on Bebe Rexha's new single, "No Broken Hearts," which premieres on March 16. That's so soon! Rexha is probably best known for penning tracks for other artists (she co-wrote Eminem and Rihanna's 2013 smash, "The Monster"), but she's gradually stepped out from behind the scenes over the last few years. For example, in 2014, she sang the hook on Minaj and David Guetta's "Hey Mama." Then, in 2015, she released her debut EP, I Don't Wanna Grow Up. Currently, she's featured on G-Eazy's breakthrough hit, "Me, Myself & I."

Rexha previewed "No Broken Hearts" in January, and it sounds quite promising. Listen to a snippet below.

And here's one last thing to get excited about: On Thursday, a rumor began circulating online that Minaj is a guest on Ariana Grande's new album, Dangerous Woman. Whoa. At the moment, it's just a rumor — but it's certainly not outside the realm of possibility. After all, the two women have worked together twice in the past: first on Jessie J's "Bang Bang" in July 2014, and then again on Minaj's "Get On Your Knees" several months later. Fingers crossed the gossip turns out to be true.

That's everything we know about Nicki Minaj's new music thus far. Hang in there, Barbz! I'll be sure to keep an eye out for more details.

More like this
5 Times Blue Ivy Has Been Featured In A Beyoncé Song Or Music Video
By Radhika Menon
Beyoncé’s New Duet Made Her Mom Cry — & Is A Nod To An Old Destiny’s Child Song
By Grace Wehniainen
Beyoncé Sent Flowers To “Masterpiece Genius” Madonna After The “BREAK MY SOUL” Remix
By Grace Wehniainen
Beyoncé Is The First Woman To Have A No. 1 Album Since Adele Did Almost A Year Ago
By Radhika Menon
Get Even More From Bustle — Sign Up For The Newsletter