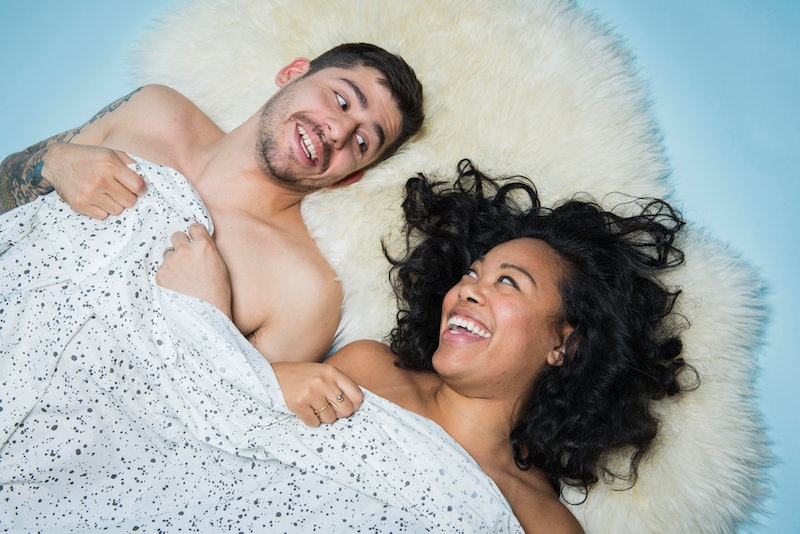 We’re always hearing that we could be having better sex, a better orgasm, or a better relationship. But how often do we hear the nitty-gritty of how we can actually better understand our deepest desires and most embarrassing questions? Bustle has enlisted Vanessa Marin, a sex therapist, to help us out with the details. No gender, sexual orientation, or question is off limits, and all questions remain anonymous. Now, onto today’s topic: how to touch a guy's butt, taint, and anus.

2. ...But Give Him Encouragement

That being said, it’s totally fine to keep talking to your boyfriend about anal play. Show him this article, and read through some of my suggestions together. Tell him, “it’s your decision, and I don’t want to pressure you, but I just wanted to see what you thought.” You can also try asking him, “is there anything I could do to make you feel more open to it?” Perhaps he would feel more comfortable if he knew that you promised not to tell anyone about it (not even your bff), or if the two of you explored in the shower (for easy, unembarrassing clean-up).

It’s hard to try something new if you have no clue what it’s going to be like. You might be able to put your boyfriend more at ease by sharing more details about what your experiences with butt play were like. Did you have any hesitations before the two of you started exploring your ass? Any fears? What helped you decide to go for it? You can also try describing the specific details of the experience to him. What was the sensation like? How did it compare to getting stimulated on other areas of your body?

4. Start With The Butt

If your guy is not sure about his anus, ask if he’s willing to try a little cheek play. If he’s really timid, start with the old hand-in-the-back-pocket move when you guys are hanging out at home, and give him a few squeezes. Give him a massage, and graze your hands over his butt cheeks. Run a finger along the bottom of his cheeks, where his butt meets his thighs. Our butt muscles can get tense, just like any other muscle, so a nice kneading massage can feel fantastic. Or try giving him a good spank (hold your hand to his cheek afterwards to minimize the sting). If you guys are having intercourse in Missionary position, grab his butt cheeks and pull him deeper into you. Ask him if his derriere enjoys the extra attention.

Try giving your boyfriend a handjob with one hand, and stroking the length of the taint with the pointer finger of your other hand. If that feels too ticklish for him, bend your finger and use your knuckle to knead into the area. As you move your knuckle in slow circles, gently increase the level of pressure you use, and ask your boyfriend to tell you when it feels best. You may want to use a dab of lube on your finger, since the area can be a bit hairy on some men (the lube will keep things moving smoothly).

6. Apply A Tiny Bit Of Pressure

If your boyfriend gives you the go-ahead to go further back to his anus, the best way to start is by using the tip of your pointer finger to apply a tiny bit of pressure to the opening of his anus. Don’t move your finger, and don't try to push inside his rectum; just hang out right at the entrance. It won't feel like you're doing much, but it will be a lot of sensation for him (and it will give him the chance to get used to it). You must use lube when you do this. As you’ve probably discovered when he played with your's, the anus doesn’t self-lubricate. Dry stimulation can feel uncomfortable, so you want the slippery barrier that lube creates.

Make sure to touch his anus while you’re doing other pleasurable things, like giving him a hand job or blow job. Or see if you can reach around when the two of you are having intercourse (Missionary or side-by-side facing each other are usually good bets). Another quick tip — make sure your fingernail is trimmed and neatly filed. No jagged edges!

7. Put Him In Charge

If you’re both interested in going any further than the outside of your boyfriend’s anus, let him be in control of the pace and depth of penetration. Slowly, slowly push your finger in further, checking in with him the whole time. Try going in an inch, then pulling back out, then going in another inch. Or tell him you’ll keep your finger still, and he can push his body against you at the pace that feels comfortable to him. A basic in and out motion is really all you need. Most of the nerve endings are at the entrance of the anus, so you can keep the range of motion relatively small. Again, lube is a must here!

More like this
Here’s How To Reignite The Spark In A Sexless Relationship
By Vanessa Marin
Here’s How To Deal With Sexual Frustration If You Don’t Want Casual Sex
By Annakeara Stinson and Mackenzie Sylvester
Are Gemini & Gemini Compatible In A Relationship?
By Kristine Fellizar
The Case For A Hard Launch Summer
By Morgan Sullivan
Get Even More From Bustle — Sign Up For The Newsletter