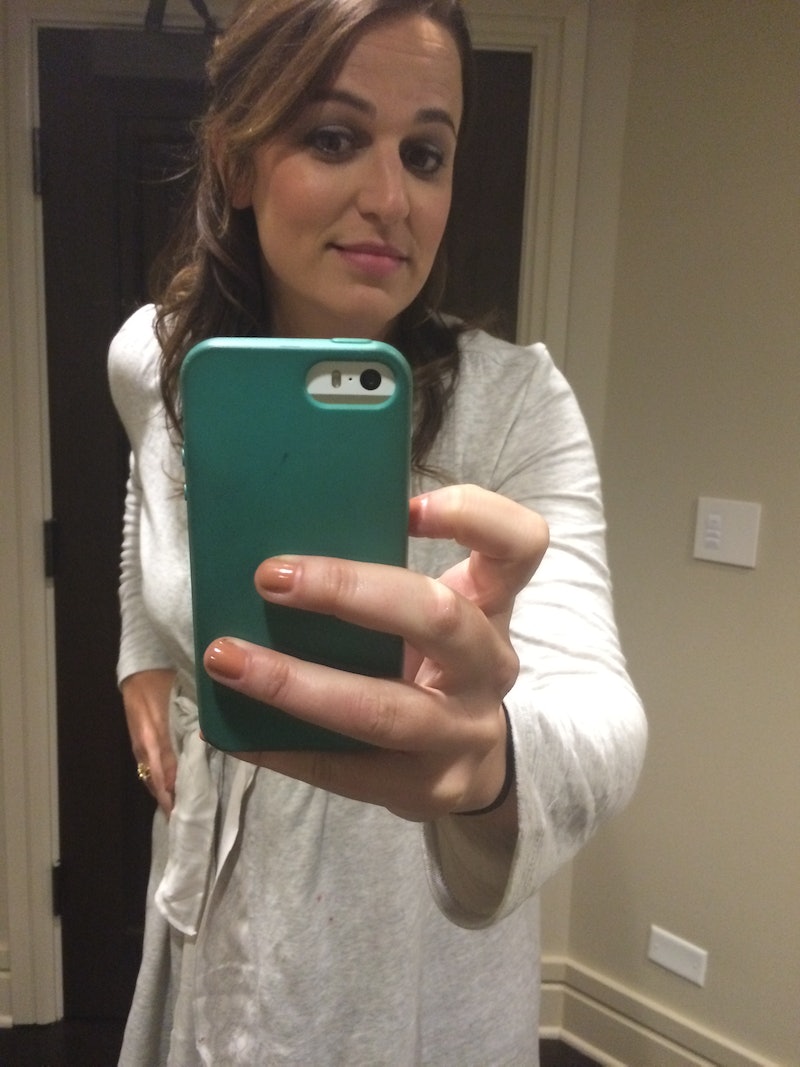 I never used to be a huge fan of having morning sex. To me, sex was strictly a nighttime activity. Maybe it's because I'm not generally a morning person. Maybe it's because neither me nor my partner have brushed our teeth. Or maybe it's because — depending on what took place the night before — I'm just not feeling all that sexy in the morning. The fact is that when you're in a relationship (or just in the throes of a one-night stand encore), morning sex is inevitably going to pop up.

But now that I'm older and therefore having better sex, this is something I actually welcome. For starters, there are tons of benefits to having sex in the morning. And let's be honest — there are so many worse ways to start the day. But does that mean I would enjoy having sex every morning for a solid week? Before this experiment, it was something I merely peppered in if the mood struck; not something I actually worked into my daily routine. Like Miranda from Sex and the City, the only thing I ever consistently want inside me that early is coffee. Not to mention how I am the queen of hitting snooze until the very, VERY last second before I have to get up.

Could I actually morning sex my way through an entire week? I decided to find out.

I gave myself a challenge once — and no, I didn't write about it — for which I made myself work out every morning for two weeks. It was actually when I was debating quitting my gym and switching over to Class Pass, but I digress. It was extremely hard, and so much easier to hit snooze and forget about it. Still, after I did it, it felt like someone had slipped crack into my water bottle.

The same phenomenon occurred during this experiment, which really surprised me. One obvious reason is that I wanted to make sure I was up earlier each day in order to test this theory. In fact, I was so concerned about factoring in the time required that I set my alarm much earlier than I probably needed to on the first day. And what's crazier, like a kid on Christmas, I woke up before it went off. My partner, not so much. When I rolled over to wake him up for our first a.m. romp, he playfully touched me like I was the snooze button. But as soon as I went under the sheets for a little oral play (and there are several awesome tricks for this), let's just say he was very much on board.

Here's what I wasn't expecting: Throughout that entire day, I was full of energy and overall just in a great mood. I was expecting to be tired, and I did crash at the end of the day, but my energy levels before that point were off the charts.

When you're on a juice cleanse, the second day is typically the hardest. Well, it's not all that different when you're undergoing a morning sex experiment.

On this morning, I just wasn't in the mood — which was a little disconcerting, given that it was only the second day. My partner, on the other hand, very much was. It was like I literally woke up his libido. I begrudgingly started getting down to action, and had pretty much never worked so hard in my life to try to make myself orgasm.

However, I will say that there's something relaxing about sex which you know is going to happen. Since this was a bit more calculated, even a borderline regimen (like doing sit-ups), I almost thought I would feel stressed out about it. When I told this to my partner, he actually laughed. His theory was: "Hey, if you know you have to do it, there's nothing to think about, right?" Right he was.

When my alarm (which, by the way, I labeled "BANG TIME!") went off on day three, we literally both started laughing out loud. I made a joke the night before that we should "sleep in our uniforms" (the "uniforms" being our birthday suits) so that we'd be ready to go right off the bat. After our laughter died down, I put his hand on my boob as my "Let's do this" move, which only resulted in more laughter.

Eventually, we had the sex. Morning sex position of choice for this one was me on top. But the sex wasn't the best part about this particular morning's routine; it was the bonding that was taking place as a result. It was like we were on this journey together, which made us closer, and in more ways than one.

I'll admit that one of my favorite things about morning sex is that I get to be a little lazy. I love missionary. There, I said it. I think it's a very underrated position in general (I'm not the only one!), and if someone knows what they're doing (aka not jackhammering you, and working their hips in blissful circular motions), it can be extremely pleasurable. Since by it's nature morning sex means you're just waking up, it was a good excuse to just let him climb on top of me and get down to it.

But since we were having sex every morning for a week, we had to mix it up a little. And mix it up we did on day four! We worked with these positions, and actually tried not one, not two, but three of them this particular morning — spooning, then modified doggy, then the lotus. Our favorite was spooning. It allowed for hands to come into play, and still sort of stay in a sleeping position.

Well, it was bound to happen. On day five, I hit snooze. I was exhausted and just didn't care. Then I woke up too late, was in a panic, and we had incredibly rushed, over the side of the bed, just-do-it-already sex. This was more work than play. Also, I was super late to work, and just felt disheveled all day long as a result.

One problem: My guy was not. Not even a little bit. It took me a lot of foreplay, and even little pleading, to get him to get give me his "full salute," if you will. The good news here is that I was so up for some action that I really took control and did most of the work, which he liked. Because, shocker, men like to be lazy, too.

Last day, last day! I was borderline giddy about it; just that relieved we could go back to having morning sex when we wanted to, not because we had to. Even pleasurable things can start become painful.

For the last day, I made some breakfast in bed (with a candle in the eggs, nbd) and said: "We're never having morning sex again after this, so let's make it count." It may have been the best sex we had the whole time, just for the very knowledge that it was our last day of a big week.

When I first took on this experiment, I knew there would be some major hurdles. Sex every morning is one of those things that sounds great, but you also just know it won't be. There's a reason the expression "too much of a good thing" exists, after all. But I never expected what resulted from this week. I was more focused and energetic, and the best part was that my partner and I really grew closer. It was almost like being in relationship boot camp. In other words, sex every morning for a week is no picnic, but it's also a great way to see what you're made of, both emotionally and physically.

I also didn't expect to want to continue doing morning sex as much as I did. I thought for certain that I'd have to mentally talk myself into each hookup more than I did. And sure, while there were times I had to really work to get going, I found myself looking forward to these a.m. antics much more than I thought. I wasn't even bothered if I didn't reach orgasm — I was just having fun each time. A lot of this, I suspect, was because of the intimate connection it forms with your significant other. Regardless, it just made me want to reach for more in about every way.

In short, I've heard that woman do tend to get more sexual when having more sex, and now I can officially back that up myself.