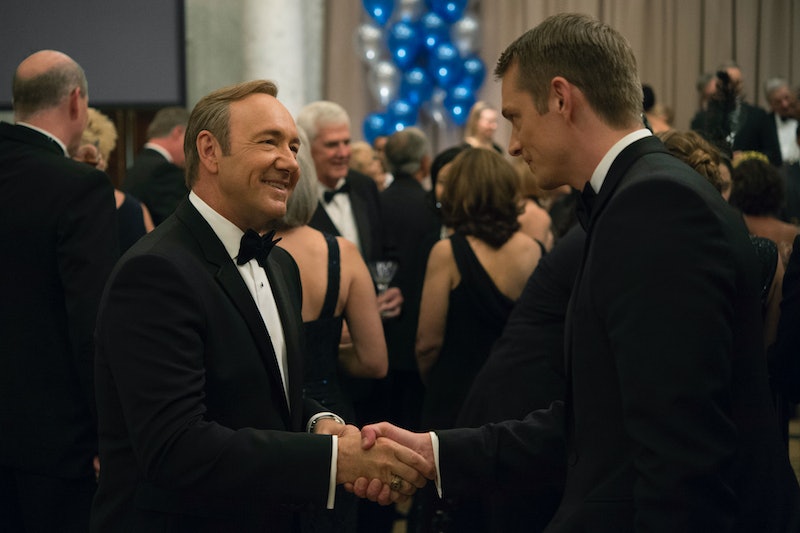 It must be hard for Frank Underwood, who has schemed and manipulated and clawed his way to the top for three seasons — ultimately landing himself the title of Most Powerful Man in the World after steering his predecessor into impeachment — to suddenly find himself subject to the whims of the American people. The President who was never elected into office came into Season 4 of House Of Cards saddled with his most herculean task yet: convince the masses why they should vote for him for a second term. So, did he succeed? Or is Frank a one-term — nay, half-term — President? Who won the presidential race of House Of Cards Season 4?

Well… nobody, really. Although the entire season of Netflix's political thriller was spent building up to the election, it ended on a cliffhanger before the polls had even opened. Apparently we'll have to wait until Season 5 to actually get the answer to that question; but that doesn't mean there weren't developments along the way.

The first hurdle Frank had to clear in the race to the White House was the primary. When Season 4 began, the incumbent was facing off against a formidable opponent in Heather Dunbar, the former United States Solicitor General and the special prosecutor assigned to the investigation into President Walker's impeachment. Although Frank had previously tried to head off Dunbar's candidacy by offering her a vacant seat on the Supreme Court in Season 3, she ended up turning it down to run against the corrupt President instead.

So the first half of Season 4 dealt primarily with Underwood vs. Dunbar. She proved herself to be a formidable opponent, staying firmly ahead in the polls and winning over many key states… until Lucas Goodwin attempted to assassinate Frank, earning the sitting President a nice bump in sympathy votes. When Dunbar was forced to admit the unsavory fact that she had met with Lucas shortly before his attempt on the President's life — and took the opportunity to accuse the comatose man of corruption in the process — she effectively tanked her chances in the process and withdrew from the race.

But just when you thought she was out, they pull her back in. When Frank decided to let the Democratic Convention pick his running mate (knowing he could manipulate them into nominating Claire as Vice President), that had the unintended side effect of leaving his own candidacy once again open to discussion. Dunbar once again threw her hat into the ring — and so did Secretary of State Catherine Durant. Ultimately, Frank and Claire managed to grab the nomination for their joint-Underwood ticket… but only by the skin of their teeth and only thanks to some truly terrifying intimidation of Cathy on Frank's part and the fortunately-timed death of Claire's mother.

With Dunbar out of the way, the second half of the season shifted focus to Underwood vs. Conway. The Republican candidate for President, Will Conway is the Governor of New York and also a likable family man with a beautiful British wife, two adorable children, and a predilection for posting videos on the internet — as well as all his emails and phone records, a transparency Frank could never even dream of matching thanks to all his back-room dealings and general murdery-ness.

Just like Dunbar before him, Conway started out with a handy lead over Frank in the polls; but of course, this being House Of Cards, Frank eventually got one-up on his opponent by catching him in a lie. Although Conway publically stated that he didn't meddle with Frank's plans to combat terrorist organization ICO by striking a deal with the Russians, Frank got a member of the House Intelligence Committe to testify that, in fact, Conway had done exactly that. (Which, for once, was the truth!)

But just as Frank looked like he would emerge triumphant thanks to Conway's plummeting support, he saw his own chances tank thanks to Tom Hammerschmidt's ill-timed article exposing the extent of Frank's widespread corruption and how he plotted his way into the Oval Office. And so Season 4 ended with both the Republican and the Democratic presidential nominees once again on an even playing field — aka both currently very low in the American people's estimation — with only three weeks to go until the election.

So when will we find out who the next (fictional) POTUS is? Considering that the primary storyline kicked off in the latter half of Season 3 and wrapped up in the first half Season 4, and then the general election storyline likewise kicked off in the latter half of Season 4, it's safe to assume that it will also wrap up at about the halfway point of Season 5. And then we'll either find Frank victorious — and get another couple of seasons out of the show, at least — or he'll be defeated… likely spelling the beginning of the end for House Of Cards as we know it.