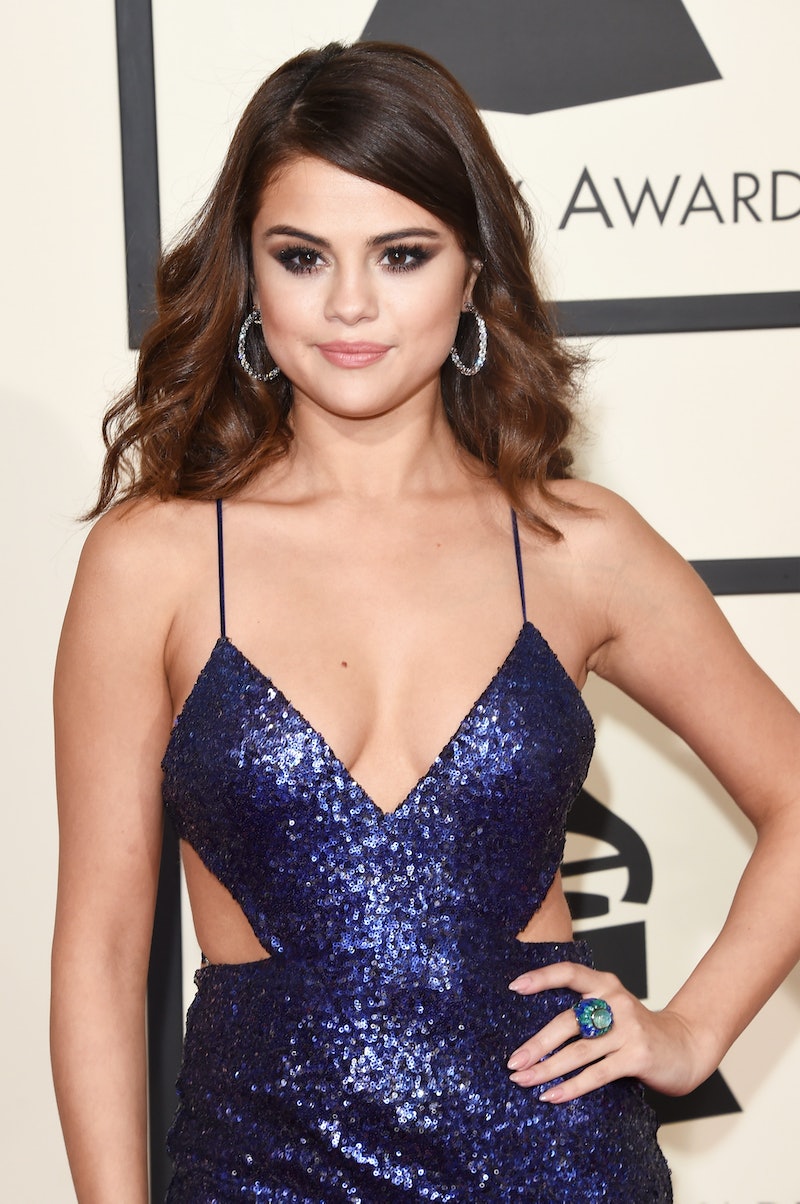 A congratulations are in order for Selena Gomez! The "Hands To Myself" singer just added an impressive title to her résumé. With 69.4 million followers, Gomez is officially the most popular person on Instagram. She was so excited about the news that she even posted a celebratory Snapchat over the weekend. Promoting one social media account on another? Now that shows just how tech-savvy she is. Although admittedly, I would've thought a Kardashian had this honor, Kim K actually has 63.7 million Insta followers. Meanwhile, Gomez's BFF Taylor Swift has accumulated 69.2 million — and up until now, she was the reigning Instagram queen. Since she and Tay are like sisters, I'm sure there's no bad blood. Maybe just some friendly competition.

One of the best things about Gomez's Instagram is that she's not afraid to be candid. Sure, she posts glam red carpet photos, but she also shares behind the scenes photos where she's eating Cheetos in a bathrobe. She's not afraid to be herself and I can imagine that's why fans are so drawn to her account. She doesn't present a facade of having a picture-perfect life (although yes, of course her life seems awesome).

Here's a round up of reasons that Gomez totally earned her spot as Instagram's most popular person. And if you don't follow her yet, this may inspire you to start ASAP.

1. She's Not Afraid To Snack

Like I said before, Cheetos in a bathrobe. She also has pictures where she's eating ice cream with friends or eating McDonald's backstage at the Victoria's Secret Fashion Show.

There should be no shame in eating the food you want and her Instagram definitely conveys that message.

How sweet is this photo of Gomez and her mother? The caption is absolutely heartwarming and shows just how close these two really are.

In addition to sentimental family photos, there's this #tbt from her early days on Barney. Too cute!

3. There Are Lots Of Cute Babies

She's constantly sharing adorable photos with little children. It's clear she's a family girl, who spends plenty of time with her loved ones. There's no denying that the kids are absolutely precious.

Gomez reposted this quote from a fellow female celebrity, Shay Mitchell. The message is beyond important. She also frequently shares photos with her squad of impressive and supportive lady friends.

Here's a snapshot from Camila Capello's birthday celebration, which was thrown by Swift. Those looks of excitement on their faces look super genuine.

And it's not just famous people. All of her besties make appearances on her page and she often makes the captions about how much she loves them.

6. She Promotes Her Work

Thanks to her Instagram, fans can know which magazines the star is appearing on and other fun projects that she's working on at the moment.

She also tends to share photos of herself on stage after concerts and other performances. It's a great way to keep up with what she's doing.

7. She Sticks Up For Worthwhile Causes

8. She Slays At Selfies

There's nothing wrong with taking a selfie or two. It doesn't mean you're egotistical. She should be allowed to "feel her look" (as selfie queen Kim K would say).

BTW, those glasses are fierce.

So, see? Now it totally makes sense that Gomez is the most popular person on the app. Based on the above, I can imagine her follower count will only keep growing.