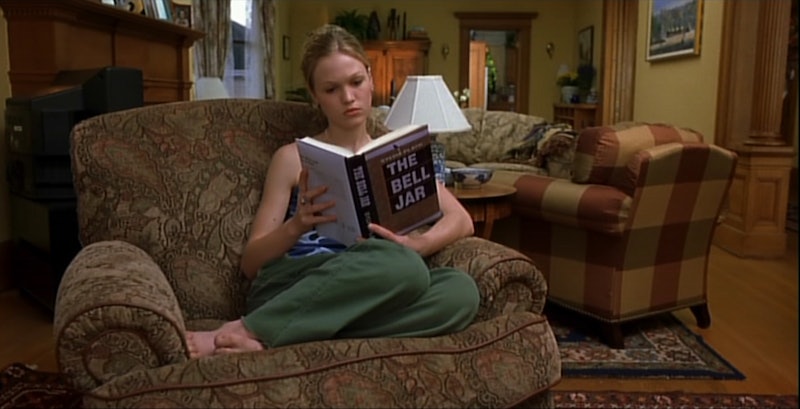 It's no easy feat to pick a favorite book. Like all lifetime commitments, it's not a relationship you want to rush into. I mean, your "favorite book" is the one book that people will judge you on for years to come, and most of us want to make a good literary impression. Say the wrong title, and your fellow readers might get the wrong idea: Harry Potter sounds too basic, Infinite Jest sounds too pretentious, and Finnegan's Wake will make people scared of you.

And then there's your favorite Classic Book. Everyone was subjected to "the Classics" back in high school, and everyone has their own opinion on which books were torture and which books were life-changing works of genius. There were the snore-fests, like The Scarlet Letter or Moby Dick (my apologies to anyone who loves lengthy nature metaphors). But then there were the books that inspired a lifelong love of reading, like Jane Eyre or To Kill a Mockingbird (my apologies to anyone who hates compelling books about interesting characters).

There's no right or wrong answer, of course, when it comes to your favorite Classic. Some readers love The Scarlet Letter, and still manage to be productive members of society. But if you have one particular Classic that speaks to you, it just might say something about your personality:

You know how to throw a good party, you've probably invented at least one cocktail, and you love good vintage thrift shop find (especially if it's a giant fur coat, or something equally impractical). You didn't like the latest Great Gatsby movie, but you were still glad that Leo won the Oscar this year. You're in crippling student debt and you think that the American Dream is kind of bogus, but you're going to have fun anyway, damn it.

2. To Kill a Mockingbird by Harper Lee

You have a thing for commanding salt-and-pepper types, and you've definitely had a bowl cut at some point in your life. You've also gotten into at least one heated political debate on Facebook with an older relative. But that's only because To Kill a Mockingbird inspired you to interrogate your internalized prejudices and fight for justice. You may or may not own a Feel the Bern shirt.

You've dated some real... characters. It wouldn't surprise you if one of your exes had a secret wife hidden in his attic. You've been accused of having a "resting bitch face" (because God forbid you ever have a neutral expression instead of grinning like an idiot). When you were younger, you wore a lot of black and preferred books to most of the people in your high school. But you're not unfriendly; you just don't waste your time on amateurs anymore.

4. Romeo and Juliet by William Shakespeare

People like to shrug you off as a hopeless romantic, but you don't care. You'll wear lacy dresses and read sappy poetry if you damn well please. You feel sorry for the cynics who can't see the romance in life. But you also like a good tragedy, probably because you were a theater kid. You've kissed a platonic friend at least once, and you're the all-time champion of giving Galentine's Day presents.

5. One Hundred Years of Solitude by Gabriel Garcia Marquez

You like Salvador Dali paintings and sketch comedy shows. Some people are a little confused by your off-beat sense of humor and your enthusiasm for things, but you don't mind. You're especially enthusiastic about sharing your favorite books with friends (if they don't get One Hundred Years of Solitude, though, they might not stay your friend). You enjoy dissecting your dreams, and you were genuinely interested in your friend's boyfriend's experimental art show.

6. The Catcher in the Rye by J.D. Salinger

You had a prolonged hat phase. You've used the word "phony" unironically, and your parents really got on your nerves when you were a teen. You like the movie Fight Club and you think music sounds better on vinyl. People just didn't get you in high school, but you're a little less pretentious these days.

7. The Bell Jar by Sylvia Plath

You dated the guy who loved Catcher in the Rye in high school, and he was a huge douchebag. You resent anyone who says that The Bell Jar is the "female Catcher in the Rye." It's really, really not. You had a hard time as a teenager, but you found an escape in books and poetry and extreme haircuts. You're sensitive towards the suffering of others, and you're very interested in smashing the patriarchy.

You never understood why other people were bored by history class in high school. You loved history! It was utterly absurd! You like a good unreliable narrator, and you don't mind settling in for a long read. Your friends usually turn to you to explain complicated political situations. These explanations are usually more long-winded than they need to be, but they're always entertaining. You can go off on a tangent like no other.

9. Pride and Prejudice by Jane Austen

You like rom-coms, but you don't broadcast it. You're big on tea and floral patterns, but you're also big on repressing your emotions and making snarky comments during movies. You're holding out for a S.O. who really gets you, but you do like flirty banter. You secretly think that Regency England is kind of romantic, but you'd never say so, because it was also really problematic. You're full of contradictions.

10. Song of Solomon by Toni Morrison

You're interested in mythology and folk tales, and you've used one of those "ancestry" websites to trace your family name before. You definitely have a list of unconventional baby names stashed somewhere, too (who says you can't name your kid "First Corinthians"?). You love a story of heightened emotions, good or bad. You're aware of all the hideous facts of reality, but it doesn't stop you from dreaming big.

11. The Call of the Wild by Jack London

You wear a peacoat, and you talk to your dog.

You have a really complicated relationship with your mother. But you love her cooking. You have some family stories that would make other people's hair stand on end, but, at the end of the day, you do love them. You're stuck with them, anyway. You have a soft-spot for dysfunctional family dramas, and you're not afraid of a story that's going to make you cry.

13. On the Road by Jack Kerouac

You went on a road trip across America the summer before senior year of college, and it changed your life. You've been drunk in the Grand Canyon before. You think pie and ice cream is an acceptable breakfast, and you don't understand why people can't just be chill about things. You have a Jack Kerouac quote in your Tinder profile.

More like this
16 Novels That Paint A Realistic Portrait Of Abortion
By K.W. Colyard
'The Summer I Turned Pretty' Book Ending Is An Emotional Rollercoaster
By K.W. Colyard
At 14, Jenny Han Wrote Rom-Coms About Her Friends & Fan Mail To Leo DiCaprio
By Alyssa Lapid
Aesop's Queer Library Is Open
By Tomi Otekunrin
Get Even More From Bustle — Sign Up For The Newsletter