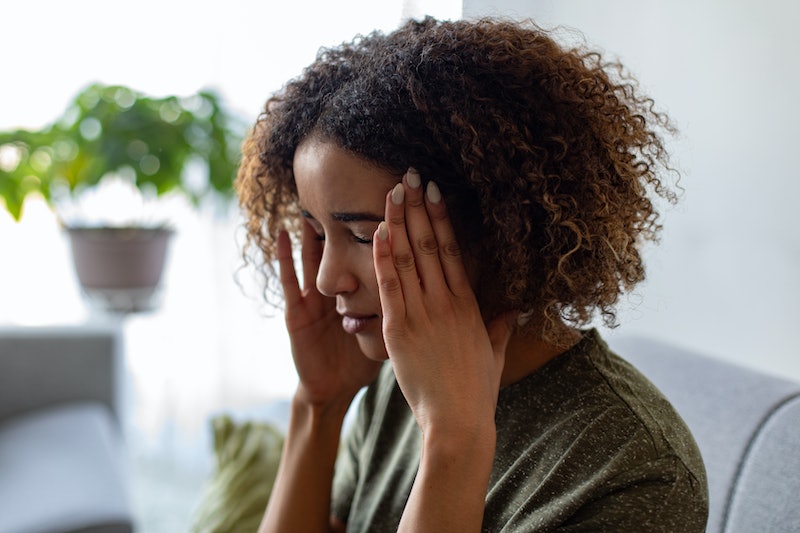 Have you ever felt painfully, excruciatingly exhausted and sleep deprived? Not like "stayed up all night partying and now I feel a bit sleepy" tired; rather, have you ever been "unable to drive or operate heavy machinery, can't remember your own birthday" tired? There's a medical distinction between different levels of exhaustion, and when you hit the absolute bottom of the scale, that is classified as "fatigue." (We throw that word around a lot, but medically speaking, it only refers to the most severe form of human exhaustion, one which significantly impairs functioning.) The experience of severe fatigue is a symptom of some illnesses, like the rheumatic disorder fibromyalgia and chronic fatigue syndrome, but it can also result from really bad jet lag, serious depression, stress, anxiety, or any condition that prevents you from sleeping or relaxing properly. In other words, you may be more vulnerable to fatigue than you think.

If you're experiencing an episode of fatigue that doesn't seem to be ending, there may be underlying factors that are contributing to the problem. Fatigue is often a multi-faceted problem, and while none of the items listed below are likely the primary cause, they may be making your fatigue worse — even if they don't seem as if they could have any impact at all.

Here are seven things that could make a fatigue problem even more severe. Serious exhaustion that lasts for a significant period is a definite medical problem, and if you're dealing with fatigue, you need to see a doctor — or at least call one while you're huddled up under your duvet.

I know that it might be tempting to boost your energy with a stimulant, but anybody who's tried that as a long-term strategy to compensate for exhaustion will be able to testify that it actually leads to a worse crash after an artificial high. The pattern of stimulants is a parabola: they create a temporary "high", but in many cases, that bump is followed by serious dips in energy. The Royal College of Psychiatrists in the UK actually recommends that anybody suffering from serious fatigue cut out stimulants like caffeine altogether.

If you're not familiar with the term "sleep hygiene," you're missing out on a potential silver bullet to your fatigue difficulties. Sleep hygiene is the practice of making your sleep environment and habits as simple and efficient as possible — which means clearing out all the "clutter" that may be disrupting your sleeping patterns, from background noise (yes, you need to turn off that droning heater) to restricting your bed use to sleep and sex, as well as adopting habits like avoiding screens for a while before you actually go to sleep. ( If you absolutely can't end your screen time early, there's a great free app called Flux that will tune your light settings on devices to appropriate, less glaring levels as the day goes on.) Disrupted sleep isn't just about waking up at night; people who suffer from fatigue spend less time in REM, or rapid-eye movement, sleep — which is the deepest level of sleep, and essential in order to wake up feeling well-rested.

This one is fairly intuitive. If you're on a restricted diet for whatever reason — for example, if you're cutting out carbs altogether, or otherwise lowering your overall food intake — fatigue is likely to ensue. It's not just a matter of having insufficient fuel for your body's workings, either; maintaining a decent diet means keeping even blood sugar levels and avoiding the "crash" when they plummet. If fatigue has popped up as a factor at the same time as you're trying something new in your diet, there's likely a correlation.

Yes, it is possible to get to adulthood without realizing that you have an intolerance to a particular food. After all, intolerance is not allergy; your body isn't wildly rejecting the foodstuff, it's just finding it particularly hard to process, digest and turn into waste. And one major side effect of eating foods that cause difficulties for your system is fatigue; it's now accepted by medical professionals that if consuming a certain foods causes exhaustion, instead of making you feel energized, it is an early warning sign of an intolerance.

In fact, a famous study done by the University of Sydney pretty conclusively tied food intolerances to long-term fatigue. The study also noted that food intolerances can appear later in life than you may think, even in your 30s or 40s. So if you suspect a certain food is making everything worse, go to your GP and discuss an "elimination diet" to see if cutting out the culprit might help lift the fatigue.

Iron is a necessary part of our body's functioning, and that includes maintaining good energy levels. The exhaustion caused by low iron levels is actually oxygen deprivation, as iron is a key element in the efficient transmission of oxygen to our organs and tissues; and without the right levels, they don't get what they need to function properly or keep us perky.

If you're on antidepressants or have been considering them, you'll be familiar with the phenomenon of "transient side effects" — that temporary physical unpleasantness that often begins when you start a new dose, but is meant to taper off after a few months.

Unfortunately, one thing that's pretty closely associated with starting a new kind or dosage of antidepressant is the onset of temporary fatigue. It's most closely associated with SSRIs and some atypical antidepressants — but no matter what you take, if you think you might be experiencing this phenomenon, talk to your prescriber about what's going on and keep a note of your side effects to see how long they last.

If you're already suffering from serious fatigue difficulties, the drowsy qualities of antihistamines may make your suffering worse. As LiveScience explains, certain kinds of antihistamines target histamines, a substance released by the body's immune system to induce an inflammatory reaction to a potential danger, wherever they find them. There's only one problem with this: histamines also play a role in the body's energy levels and metabolism. So squelching them all over the place, rather than just in specific ways targeted at allergy symptoms, actually results in aggravating fatigue.

Allergies may be causing your fatigue in the first place by making your sleeping difficult, so this is a conundrum to be solved with a doctor and some non-drowsy allergy meds.