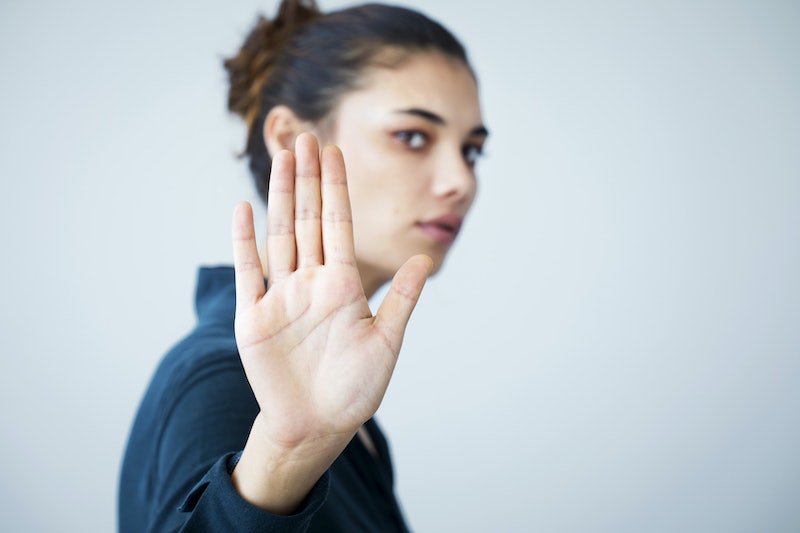 It seems like our society has an automatic reflex to blame survivors of sexual assault and harassment, rather than support them. When someone accuses somebody of sexualized violence, they're almost guaranteed, in turn, to be accused of behaviors that don't actually mitigate sexual misconduct, like dressing provocatively or drinking. That is, of course, if they're believed in the first place, because we also seem to have a reflex to assume victims are lying.

There are a number of reasons why we blame sexual assault victims. For one, we don't want to think we could be in their situation, so we assume that they did something we wouldn't. Additionally, perhaps, we don't want to think such horrible crimes happen or that the people we know could be capable of them, which can explain cases of both doubting and victim-blaming. And the effects of victim-blaming continue to ripple, which can be particularly damage to survivors: When someone who has received these messages about supposedly mitigating circumstances becomes the victim of sexual misconduct, they can believe that their assault was not really so bad — after all, they kissed their perpetrator first, or they didn't say "no," or they simply aren't of the demographic we tend to sympathize with. Right?

Wrong. In reality, nothing mitigates any form of sexual misconduct. If you've been subject to unwanted touches or words, your case is no less deserving of being taken seriously than any other victim's. Here are just a few things you may be told mitigate sexualized violence that actually do not.

1. The Type Of Misconduct

Sexual misconduct can be physical or verbal, and it may or may not involve sex. It can be perpetrated in person or through digital communications. It can be perpetrated by spying on someone, even if you never interact. And I know firsthand that people don't take all types seriously. After I confided in a friend that a date had taken off my clothes and touched me in places I'd said "no" to, she responded, "But did he rape your or not?" It took me a while to understand that the trauma inflicted by sexual misconduct of any sort comes from having your boundaries ignored, not from any specific physical act, and that the violation of my boundaries was a valid reason to feel traumatized. There is no formula for how you're supposed to feel based on what type of violation took place.

Because women are viewed as weaker and more vulnerable, sexual misconduct committed toward men is often considered preventable or less serious, which can lead to both victim-blaming and dismissiveness; furthermore, gender-nonconforming people are so frequently dehumanized that assaults perpetrated against them are often not even given any attention at all. Due to societal misogyny, homophobia, and transphobia, women and gender-nonconforming people are more likely to experience sexual misconduct, but it's a huge problem for men as well, with one in 33 American men the victims of attempted or completed rape, according to RAINN. Sexual misconduct can happen to anyone, and it is equally serious no matter the gender of the victim or the perpetrator.

Because black women are often stereotyped as "jezebels" devoid of any boundaries to be violated, their assaults are often taken less seriously. This may help explain why, according to a Justice Department study, African American victims are less likely to report rapes. “If a black man rapes a white woman, it’s wrong because white is pure,” one black woman told City Paper. “But as a black woman, if I get raped it’s because I deserved it.” Of course, nobody ever deserves rape, and it's still rape no matter what your race.

4. Whether You Drank Or Used Other Substances

Sexual activity with someone too incapacitated to consent is a crime. Rather than mitigating an assault, alcohol in fact makes an act an assault in the eyes of the law, according to RAINN. You are not asking to be raped by drinking. The only person responsible for the assault of someone passed out from alcohol is the person who decided to take advantage of them rather than make sure they got home safe.

5. What You Did With Your Assailant Before

After the encounter I described earlier, another friend I confided in said, "But you kissed him" — as if that meant I wanted or gave permission for everything else. But people who want to make sure they have consent need to treat each act separately. Nobody consents to one physically intimate activity just by engaging in another. There are many, many situations when someone might be ready for one act, but not another. And even if you've had sex with someone a thousand times before, you still have just as much of a right to say "no" the next time, and they are still as responsible for listening.

If what you're doing becomes uncomfortable or you're no longer interested, a partner continuing is just as bad as them starting when you don't want to. I also learned the hard way that people don't take unwanted sex as seriously once you've already started: When I told a therapist that my boyfriend at the time continued sex when I said it was hurting, she said, "It's hard for men to control themselves." Actually, if someone is concerned about your well being, stopping when you're not OK isn't difficult at all. If they care about you, they will not want to continue.

Tyrese Gibson recently tried to tell Amber Rose on an episode of It's Not You, It's Men that a woman who is open about enjoying lots of sex with lots of people should not be surprised if someone makes unwanted advances toward her, the same way a basketball player shouldn't be surprised if someone asks them to play basketball. But actually, we would find it really weird if someone tried to force someone to play basketball just because they played professionally or wore a jersey. Same goes with sex: Someone's attitudes toward sex in general are completely irrelevant to whether they've consented to any given interaction, and their consent or lack thereof still matters just as much.

Don't believe the common excuse that men get uncontrollable sexual urges just by looking at scantily clad women. Research has called into question the stereotype that "men are more visual" in the first place, but even if they were, the decision to act on sexual arousal by doing something another person doesn't want is just that: A decision. You are never asking to be harassed or assaulted by wearing something that shows off your body.

9. How Hard You Fought Back

You shouldn't need to fight back — and there are many understandable reasons victims don't. They might be scared of further aggravating the perpetrator, they might be emotionally manipulated into a sexual situation, they may be frozen with fear and shock, they may want to convince themselves the encounter was consensual by going along with it, and they may know that saying "no" will actually make no difference. If you did not consent, it was still assault, even if you didn't fight back.

Sometimes, victims don't became aware that they've been assaulted or behave as if they have right away. In fact, it can take years to realize something constituted misconduct, since we're taught to dismiss so many unacceptable acts. Author Aspen Matis wrote in Girl in the Woods that she asked her rapist to sleep over because she wanted to believe so badly that it wasn't rape — and heard from woman after woman who had done the same. I myself texted my roommate excitedly after my unwanted hookup, hoping I could convince myself to view it like any other hookup. And Laura Gianino wrote in Bustle that she and her friend both realized they were raped years later. Even if you behaved in a way that indicated your assault was consensual, that does not mean it was. Only you can know that. And it doesn't make it "not that big a deal" — because nothing ever can.