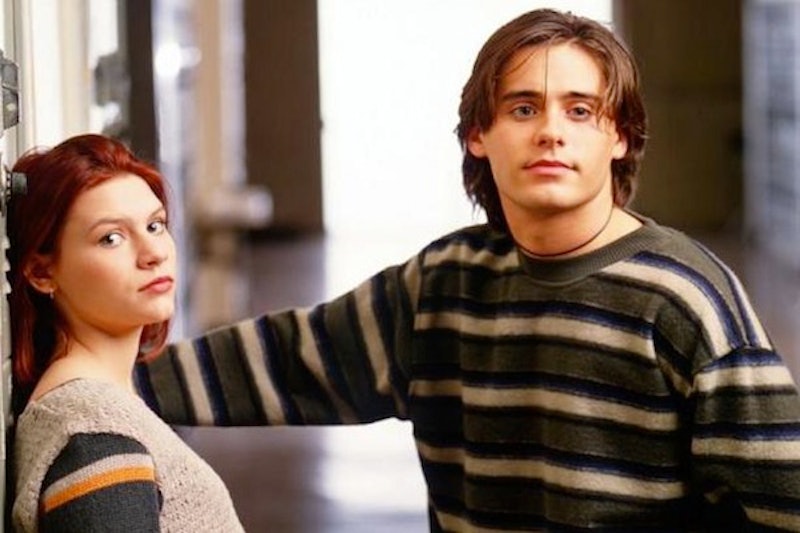 Let's face it — dating, no matter what time period you're doing it in, has its quirks. But looking back now on my high school dating heyday, I'm particularly struck by the fact that dating in the '90s was weird in many, many ways. Which isn't to say I didn't totally enjoy it, because I dated the hell out of the latter part of that decade. What it does make readily apparent, though, is how much the times have changed since then.

For the record, I haven't been on the dating circuit for quite some time, so I'm not nearly as familiar with eccentricities of dating today. What I do know is that dating is way more driven by all things digital than it was back in the day — swiping right was definitely not in the '90s dating vernacular. So if you think about it, most of the ways dating in the '90s seem weird have a lot to do with the fact that the things we did back then could be considered woefully outdated. Having said that, I thought dating in the '90s was hella cute and don't care how weird it was ... it was a blast and I'll always remember it with rose-colored glasses.

And since I'm a firm believer that weird can be good, let's explore some of the ways dating during that nostalgic decade was a bit mind-boggling.

1. Sitting By The Phone For-ev-er Waiting For Your Date To Call

Oh, to have back all the minutes I spent waiting for former boyfriends to call and make plans. At the time, this wasn't nearly as desperate as it sounds now — we couldn't login to FourSquare to see where they'd last pinged, or touch base via text. We had no choice but to chill by our landline phone and pray to the dating gods no one got on the Internet and set us back an hour.

So, here's the deal. Again, we didn't have the convenience of social media for the bulk of the '90s by which to get an idea of what our boyfriends or girlfriends were doing when they weren't with us. Thus the drive past, which (*cringe*) entailed hopping in the car with your BFF and cruising past your significant other's house to see if their car was in the driveway. Looking back, this feels a bit stalker-y, so uh ... moving on.

3. Getting Dressed Up In All Your Fancy '90s Gear Before A Panel Of Your Besties

Granted, daters today obviously still get dressed up for dates. However, girls in the '90s had a special brand of getting ready to go out on a date. It often included inviting several friends over to help with hair and makeup and nearly always involved butterfly clips, crop tops, and frosted eyeliner.

4. Picking A Locale And Figuring Out How In The Universe To Actually Get There

In this respect, daters today have it so much easier than we did way back when. The idea of using an actual map to route your directions and poring over the newspaper for movie times or restaurant reviews might seem entirely bizarre in today's GPS-driven, Yelp-addled world, but at the time it was essentially our only option. Well, that or asking your Mom to drive you. Which is why most of our dates wound up happening at the local Pizza Hut.

Real talk: sex education is a big part of dating during your formative years, whether you choose to abstain or not. These days, people enter the dating arena armed with an arsenal of knowledge gleaned largely from the internet and media. But back in the '90s, our pre-dating days included the kind of sex education that now seems comically weird — a colorful combination of the lyrics of songs like Salt-N-Pepa's "Let Talk About Sex" or Ginuwine's "Pony," life-scarring sex ed lessons involving condoms on bananas, and that infamous birds and bees convo with the parental units.