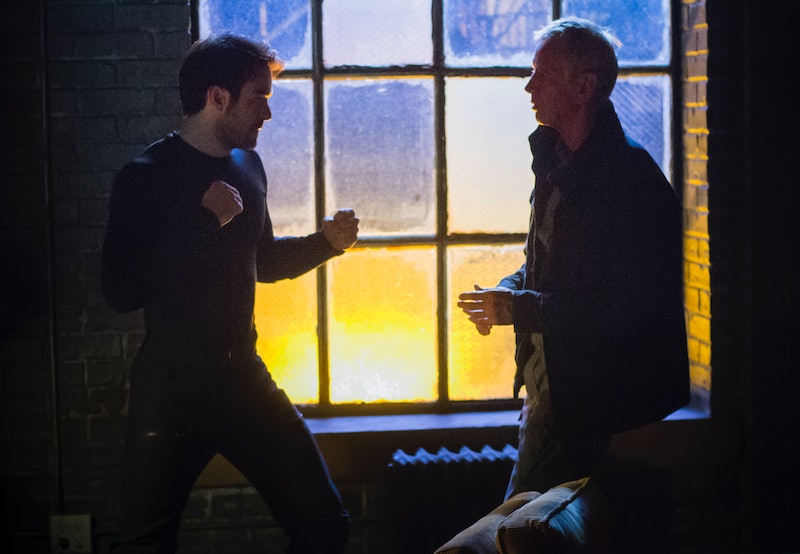 While helping Elektra, Matt Murdock stumbled across an old friend — well, "friend" is a strong word. Daredevil's blind martial arts trainer, Stick, returned to Daredevil Season 2 and told Matt what the Chaste is. Spoilers for Episode 8 of Daredevil Season 2 follow. Fans of Marvel's Daredevil comics or the previous films know about the Chaste, but if you're newish to the franchise, Stick's description of his martial arts group who battles the ancient group the Hand may have thrown you for a loop. While the Hand was alluded to in Season 1, the Chaste — and Stick's involvement — was new to Netflix's Daredevil Season 2 when it premiered on March 18.

Instead of focusing on just one villain like Season 1 (mostly) did with Wilson Fisk, Season 2 of Daredevil was chock-full of plots. While I was paying attention to what was going on in the trial against Jon Bernthal's the Punisher, his lawyer Matt Murdock was more distracted by helping his ex-girlfriend Elektra. On one of their high-risk outings, they discovered a massive hole that the Yakuza (but it was really the group the Hand) created and Elektra was struck by a poisoned blade. Stick appeared and helped save Elektra's life with an interesting ingredients list — and to explain to Matt his involvement with the dangerous affairs that are going down in Hell's Kitchen and throughout the world.

As he explained to Matt in "Guilty as Sin," Stick is a member of the Chaste — the only foe to the Hand, an ancient group of ninjas formed centuries ago who have found the secret to immortality. (As unrealistic as the immortality thing sounds to Matt and perhaps the show's fans, this idea of resurrection is continued in the later episodes of Season 2.) Stick explained that the Hand, "free from the fear of death," spread across Asia and continued gaining power and money, becoming nearly unstoppable. Their goal is destruction (slightly reminiscent of Ra's al Ghul's League of Assassins in the Batman series) and obtaining dangerous and unorthodox weapons, like the elusive Black Sky.

The Chaste was created when the Hand attacked a village and killed all but one child. This child, who had watched his mother be murdered by the Hand, killed the Hand warriors by himself. When the child grew up, he assembled the best warriors he knew who "kick ass," as Stick said, "without mercy" and that's how the Chaste became "the only protection this world has against the Hand."

Although the Chaste started as only one child, people of all ages and genders can join the group who is set on defeating the Hand. The Chaste were introduced into the Daredevil comics in 1982, shortly after Elektra joined the comics in 1981. While the TV series has some notable variations from the comics, the main gist of how Stick trained both Matt and Elektra is the same. Yet, unlike Matt, Elektra is a mercenary who uses her training to kill — something Matt Murdock doesn't do. And when Stick shows up, it's revealed that when Elektra and Matt met in college, she was there on orders from Stick to try to get Matt to become a ruthless killer and join the Chaste (something that doesn't happen in the comics). Unfortunately for Stick and Elektra, killing anyone — even the evil, powerful force of the Hand — goes against Daredevil's moral code.

Not only will the war between the Hand and the Chaste continue to be a huge story in Daredevil, these two groups of ninja assassins will make their way to Netflix's other upcoming series Iron Fist. So don't expect Stick's appearance to be the last Matt Murdock — or New York City — hears from the Chaste.