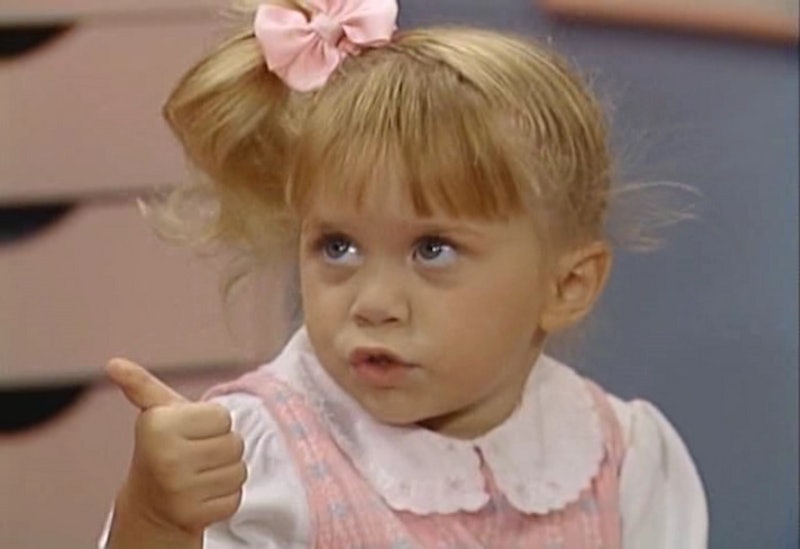 I adored the Olsen twins in the '90s, and I have major respect for the business empire they have built for themselves. They are two awesome women who left acting behind, and for that reason it is time to recast Michelle Tanner. I know the mere thought is blasphemy, but Fuller House Season 2 needs Michelle, and with such off-screen success, the Olsen twins have no reason to return to acting. The only solution is to find someone who is interested in acting and welcome them into the Tanner family fold.

The Olsen twins were eight when Full House ended, and even though Michelle is an iconic TV character, a recast wouldn't be too glaring if the right actor took over the role. Adult Michelle just needs to be as fun loving, quip happy, and obsessed with catchphrases as her younger counterpart was and have chemistry with her onscreen siblings. Ideally, she would also be played by a familiar face to '90s kids. Fuller House is all about the nostalgia, so if someone new is going to play Michelle, that someone needs to be an actor who made her mark during everyone's favorite decade.

I love the behind-the-scenes family feel of Fuller House, but since the Olsens don't want to return, the team needs to get serious about what is best for the series. All three of the Tanner sisters need to be together again, and any one of these actors could make that happen.

Who has more experience playing the little sister role than Trachtenberg? As Dawn on Buffy the Vampire Slayer, Trachtenberg was the ultimate little sister. She also has major '90s cred thanks to Harriet the Spy and Pete & Pete. Add in her striking resemblance to the Olsen twins and killer comedic timing, and it becomes mind-boggling that the Fuller House crew hasn't already cast her.

Eventually, Girl Meets World is going to have to decide which Morgan from Boy Meets World to bring back, and if they opt for the second version, then I'm just going to be over here pulling for the original Morgan, Nicksay, to nab the role of Michelle. Nicksay is still acting today, mostly on the stage, and since she hasn't been on TV for some time, it wouldn't be jarring to see her as Michelle. Nicksay was hilarious as the adorable Morgan, so why couldn't she rock the role of Michelle too?

Oleynik is slightly older than the Olsen twins, but she is also an amazing actor who has worked steadily since she was a child. Fans will know her as Alex Mack and Dawn from The Babysitter's Club, but Oleynik's bubbly personality would quickly allow her to make the character of Michelle her own.

Zima was once the youngest child on The Nanny, but she has added plenty of new credits to her name since then, including roles on Heroes and Californication. She knows her way around a sitcom set, and she was a familiar face in the '90s who could slip into the role of Michelle with ease. I can definitely see Zima hanging out with Stephanie and D.J. during a break from running a fashion empire in New York.

The former queen of DCOMs needs to be back on TV. Brown is talented, can sell family friendly fun without it ever seeming cheesy, and has an upbeat nature that shines through in all of her projects. She also looks a lot like Candace Cameron Bure, which would make her immediately feel like a Tanner sister.

Majorina is a cult favorite thanks to roles in Corrina, Corrina, Napoleon Dynamite, and Veronica Mars. She can be wonderfully snarky in a way that would be befitting an adult Michelle, and she would add an element of cool to Fuller House without even trying.

Duff is actually my number one pick to play Michelle because she would be flawless, but she's pretty busy at the moment though thanks to TV Land's Younger. However, Michelle doesn't need to move in with her sisters full time. Duff could breeze in for a couple of episodes and turn the Tanner household upside down before heading back to New York City until the holidays.

OK, so Osment is more of an '00s actor, but have you seen the woman on Young & Hungry? She is a ball of energy who can make you laugh with nothing but a well-timed facial expression (shades of Michelle already). She wan't born until after Full House premiered, but I am happy to fudge the math if it means an actor as effervescent as Osment could play Michelle.

After years of playing Allie Barone on Everybody Loves Raymond, Sweeten knows her way around a multi-camera comedy set. Again, she's younger than the Olsens, but she is a veteran sitcom star who could handle the role with the grace and humor it requires.

OK, so it is a long shot, but wouldn't it be cool to see Dani from Hocus Pocus play Michelle?

I know she is now mostly a talented writer who doesn't really act much anymore, but hey, I can dream.

Any one of these actors could offer up a "You got it, dude!" and instantly make the role of Michelle their own. Now someone from Netflix just needs to hire one of them.

More like this
Here’s Why Danny Masterson’s Hyde Isn’t In 'That '90s Show'
By Brad Witter
A New 'And Just Like That' Table Read Pic Confirms A Key Character's Return
By Jack Irvin and Grace Wehniainen
'Friends' Star Maggie Wheeler Offers Support To Matthew Perry After Reading His Memoir
By Alyssa Lapid
Mel B Thinks These Celebs Should Play Them In A Spice Girls Movie
By Alyssa Lapid
Get Even More From Bustle — Sign Up For The Newsletter
From hair trends to relationship advice, our daily newsletter has everything you need to sound like a person who’s on TikTok, even if you aren’t.