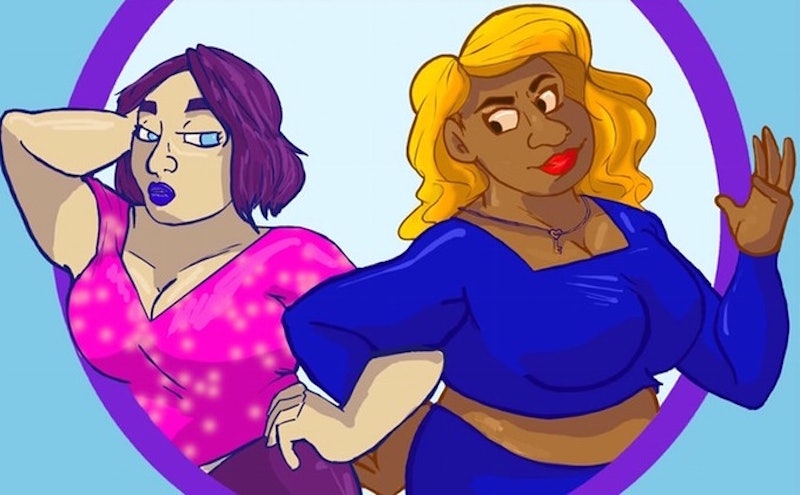 These days, mainstream and social media are completely saturated with declarations of self-love. It can seems like every other news cycle boasts a self-appointed body positive icon or affirming hashtag for us to celebrate and share. But one new podcast, Bad Fat Broads, has a different kind of message.

"My gut instinct," co-host Ariel Woodson tells me on the phone, "Is that the takeaway people should have from Bad Fat Broads is, 'Shut the hell up and listen.'"

This isn't to say that Woodson, a 31-year-old operations manager from Dallas, and her podcast partner-in-crime KC Slack, a 27-year-old graduate student in Berkeley, want audiences to blithely listen to everything they have to say, no questions asked. In their minds, "shut the hell up" implores listeners to dismantle the often problematic messaging that surrounds mainstream body positivity, and instead look at things from a more critical, inclusive perspective. "I want privileged people to have the experience of something not being for them, necessarily, but being valuable," Slack says in a phone interview. "To see that seeking the marginalized when making media choices can be really powerful and open your mind up to things you didn’t know. To see their problems as part of a larger system of oppressive bullshit.”

Despite the fact that body positivity and self-love have become household phrases, and that both Woodson and Slack have been contributing to radical, feminist, and fat positive conversations on social media for years, a podcast like Bad Fat Broads is still something of an anomaly. Most "radical" body positive messaging isn't often very radical at all: Conventionally beautiful women like Chrissy Teigen and Selena Gomez are labeled body positive icons, clothing brands routinely exploit body positive messaging to improve their bottom lines (while using models that fit traditional beauty standards), and social media stars are born from the simple action of showing off their stretch marks.

This isn't to say that any of the body positive status quo is inherently malicious, but it does tend to overlook a certain truth: Most of the time, it's controlled by people who are white, thin, straight, able-bodied, and/or on the small side of fat. In other words, people whose conventional beauty is routinely lionized and exalted anyway.

Bad Fat Broads goes to places where mainstream media's cameras rarely point their lenses. Woodson and Slack want to move beyond recycled headlines that float around aimlessly in the body positive ether, and instead focus on the topics and people that aren't given the time of day by mainstream media: Women of color, the fat (and very fat), queer folks, the disabled, and anyone whose ideas or identity exist outside the realm of convention.

“The plight of, say, the plus size model, and the plight of the plus size person are two different things," says Woodson. "And it’s being put into the same conversation. We’re only listening to one group of people."

These ideas are what brought Woodson and Slack together on Twitter about a year ago. Realizing that they were both frequently tweeting about the same things (racism, fat politic, and misguided body positive brand campaigns, to name a few), Slack suggested that they start a podcast, a place where they could organize their thoughts and present them as radical content for the masses. Putting feelers out to their audiences on Twitter, the pair were told it couldn’t be done, mostly due to the fact that so much content that currently exists in body positive and fat communities relies heavily on things like fashion, flashy campaigns, and modeling. As difficult as it may have been to visualize a space for this kind of content, Woodson and Slack pressed forward regardless. The pair started a crowdfunding campaign on IndieGoGo, with the goal of raising about $500 for microphones and other necessities. They ended up raising nearly $1300.

Overwhelmed by the support, Woodson and Slack hired people with intersectional identities to make their Bad Fat Broads illustration, as well as the music for the podcast. Bad Fat Broads has put out three episodes so far, and plans to produce about three shows per month.

"It's 'bad' as in bad bitches," Woodson explains. "But also bad as in non-compliant women in general — specifically in terms of fat performance."

The pair come from intersectional, marginalized perspectives themselves (Woodson being fat and black, Slack fat and queer), and want to make room for people like themselves in mainstream conversations. That's why their perspective, though not necessarily popular, is so important and fresh: While the rest of society is patting itself on the back for finally letting Ashley Graham onto a magazine cover, the Bad Fat Broads want people to know that a curvy, white, beautiful woman fronting a magazine isn't actually radical, but rather a small deviation from the norm. It's not bad, per se, but it's still not enough.

Other topics on the show range from Lane Bryant’s controversial advertisements, to bras that fit well, to fat-phobia in the media, and the difference between the public's perception of the recent Ebony and Sports Illustrated covers and, say, the images of Gabourey Sibide in lingerie inside of V Magazine.

No matter what the topic, the podcast is about examining beauty, respectability, and identity outside of convention. It's not only a show for those in the fat community who wish to see more representation, but also for anyone who wishes to move beyond Body Positivity 101 and into more compelling subject matter. For Woodson and Slack, it's not about silencing the voices that already exist, but providing a space for new ones to shine in a world that tells them they can't.

"It's the Bad Fat Bitch perspective on everything important,” Woodson says.

And now's our chance to shut up and listen.

To support the Bad Fat Broads podcast, check out their Patreon page.