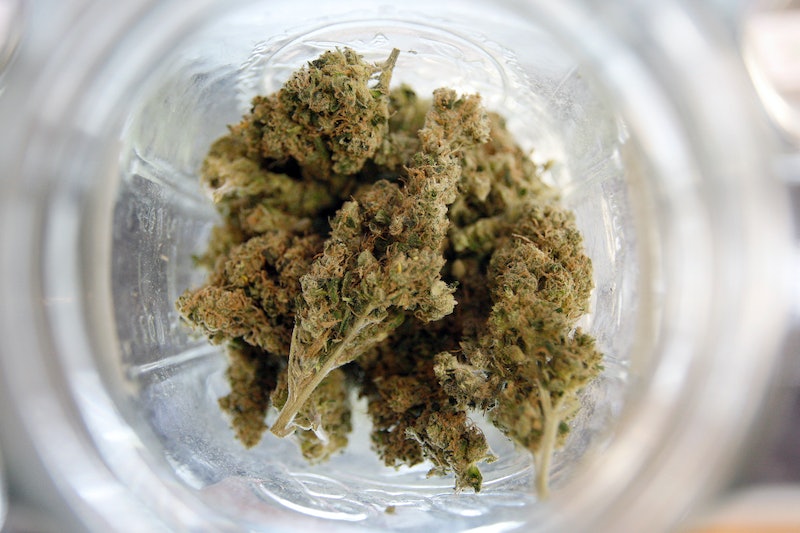 If you're anything like me, there is nothing you love like eating Nutella out of a jar. For lovers of both Nutella and marijuana, however, the chocolate hazelnut treat is getting an upgrade: A weed-infused, Nutella-like spread called Chrontella combines your two favorite things. There are just a few caveats: One, it apparently only exists in Canada, where medical marijuana has been legal since 2001... and two, it might actually not exist in reality at all. According to Vice, Chrontella retails for about $23 per jar; however, according to Chrontella's Instagram account, neither it nor any of the other items visible on the page are for sale — it's "just a showcase." Mysterious, no?

In any event, though, the information available suggests that a jar of Chrontella hypothetically contains about three servings. There's about 300 mg of cannabis extract per jar, so you're getting about 100 mg per serving. Neither is Chrontella the only edible dreamed up by the geniuses behind it; a weed-infused peanut butter called Pif can also been seen on its Instagram page. Because you know, what could be better than a weed-infused chocolate, hazelnut, and peanut butter toast combo to start your day? Even if they turn out just to be concept products, the idea is still pretty rad.

But remember: Whenever you consume edibles, make sure you're a) doing it legally, and b) monitoring how much a serving actually is. Generally speaking, the high you get from smoking marijuana hits you differently than the reaction you'll get from consuming an edible, so don't pound a handful of cookies or brownies the way you would if they weren't infused with weed.

If you live somewhere marijuana is legal and you want to make your own weed-infused Nutella, there are plenty of recipes for DIY-ing it yourself at home. There are also tons of cool things happening with marijuana-infused edibles elswhere in the weed world, from macaroons to beef jerky. And if you really love cannabis, you can even stay at a bud and breakfast in Denver, Co. — a city that's really bursting with weed commerce. If you're a cannabis lover, there are few things more relaxing than a weekend by yourself in a city where marijuana is legal for recreational use and you can eat marijuana infused edibles to your heart's content (though, remember not to overdo it and end up in the hospital). This could also be the perfect romantic weekend if your partner also enjoys marijuana.

Regardless as to where you go to enjoy cannabis, though, the world of weed is definitely expanding — so hey, maybe Chrontella might actually become a purchasable item some day. What could be better?