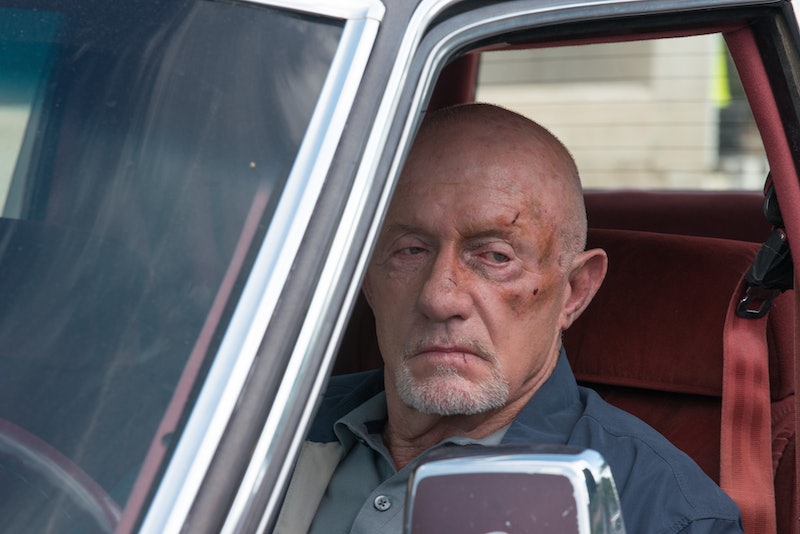 With Easter just around the corner, it's appropriate that AMC's Better Call Saul seems to be ramping up the Breaking Bad easter eggs. While the inaugural season of the spinoff was light on direct connections to its parent series outside of the two main characters of Jimmy McGill and Mike Ehrmantraut, Season 2 has now featured three episodes in a row of surprising BB cameos. Two weeks ago we saw Mike tangle with Tuco Salamanca; last week, Tuco's uncle Hector paid Mike a visit; and now, in this week's episode, "Bali Ha'i," Mike was threatened by the terrifying Salamanca enforcers known as The Cousins.

Their sudden appearance was like something straight out of a horror movie, a jarring moment in a show as typically measured and slow-paced as BCS. While Mike was supervising his adorable granddaughter Kaylee in the pool at her new apartment, he looked up to see the menacing figures standing silently on a nearby rooftop, staring down at the old man and the little girl, looking for all the world like Michael Myers and his even evil-er twin. As Mike watched, they made a threatening gesture in his direction… and then every so subtly moved so that their gesture was clearly pointing at young Kaylee instead.

Why were The Cousins threatening Kaylee? Because Mike had apparently decided to turn down the offer presented to him by Hector Salamanca last week. The aging drug kingpin approached the aging fixer to offer him $5,000 in exchange for testifying that the unregistered gun Tuco threatened him with was actually his own, thus lessening Tuco's prison sentence. Since the whole point of Mike's altercation with Tuco was to get the unstable drug dealer locked up for good long while — that's what Nacho hired him for, after all — Mike declined to cooperate with Hector's plan.

Of course, we should all know by now that Hector Salamanca is not a person to be trifled with. After his plan of sending two goons to Mike's house to intimidate the old man backfired, Hector decided to send his identical twin nephews, Leonel and Marco, to threaten Kaylee instead. And so Mike was forced to meet with Hector once again for his granddaughter's sake, where the kingpin once again presented his offer — only this time the $5,000 was off the table. Mike's only payment would be Kaylee's continued wellbeing.

Amazingly, Mike somehow managed to turn this unenviable situation to his advantage. He knew that, no matter how much Hector threatened him, he was still the only one who could give the man what he so desperately wanted: a reprieve for Tuco. So he upped his demand from $5,000 to a hefty $50,000… and considering the alternative was everyone in the room dying and Tuco rotting behind bars, Hector agreed. He also complimented Mike on his mettle, wondering out loud how the old man has managed to live so long.

Surprisingly, Mike ended up splitting his $50,000 take 50-50 with Nacho. When his employer asked why Mike was just handing him $25,000 of his own volition, Mike told him it was because he hadn't held up his end of the deal. He was supposed to get Tuco out of the picture by sending him to prison for a good long while — and now Nacho's little "problem" will be coming back sooner than any of them expected.

And considering that we never met Nacho during the events of BB, that can only mean bad things for the man who hired Mike to put Tuco behind bars…

More like this
Here’s The True Story Behind 'A League Of Their Own'
By Morgan Leigh Davies
Watch The Trailer For Netflix’s Edgy New Comedy 'FAKES'
By Brad Witter
Does 'Locke & Key’s Ending Mean There Could Be A Season 4?
By Sophia Moore
Jane Lynch Revealed Why She’s Leaving 'Funny Girl' After Lea Michele Was Cast
By Grace Wehniainen
Get Even More From Bustle — Sign Up For The Newsletter