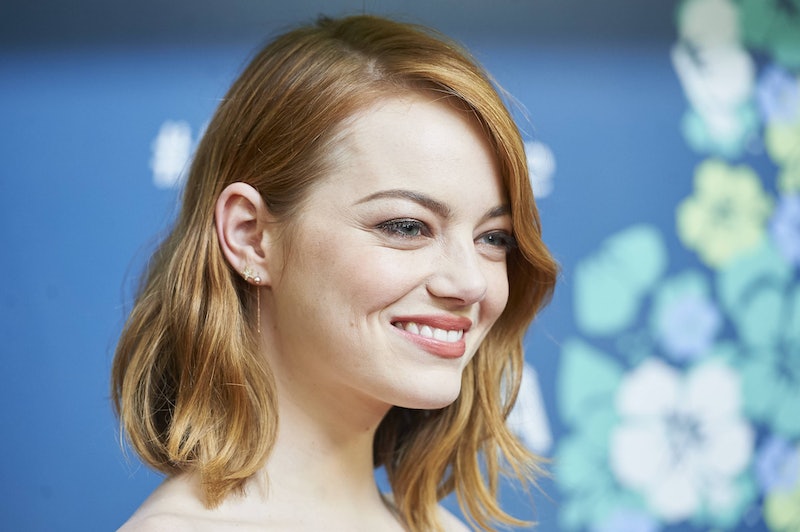 The 88th annual Academy Awards may now officially be a thing of the past, but in Hollywood, "Oscar season" never truly stops. Studio executives, actors, directors, and everyone else in the industry are constantly looking head to the next cycle, to the next film that will rake in Oscar gold, to the next project that will get the qualifier "Oscar nominee" attached to their name. You can already get a good sense of what the 2017 Oscars are going to look like simply by looking at what's coming out of film festivals like Sundance. One person that clearly has her eyes on the prize is Emma Stone, who has just been cast in Letters From Rosemary in a role that's sure to earn the actress plenty of chatter come awards season.

According to Variety, the new film "tells the story of Rose Marie 'Rosemary' Kennedy, the first born daughter to Rose Fitzgerald and Joseph Kennedy, Sr., and the eldest sister of President John F. Kennedy and senators Robert F. Kennedy and Ted Kennedy":

After displaying behavioral problems that caused her to fall behind accolades of her siblings due to a mental disability that was long kept secret, Joseph Kennedy arranged one of the first prefrontal lobotomies for her at age 23. The procedure failed and left her permanently incapacitated.

Before even a single frame of Letters From Rosemary has been shot, the film already has many of the ingredients of a successful Oscar contender. Ingredients such as…

If Stone won Best Actress for Rosemary, she would be in good company. Just look at this list of actresses who have won the same prize for playing real women in the 21st century alone: Meryl Streep (The Iron Lady), Sandra Bullock (The Blind Side), Marion Cotillard (La Vie En Rose), Helen Mirren (The Queen), Reese Witherspoon (Walk The Line), Charlize Theron (Monster), Nicole Kidman (The Hours), and Julia Roberts (Erin Brockovich).

Sometimes, the more a character suffers, the better. Anne Hathaway won Best Supporting Actress for her scant 15 minutes of screen time in 2012's Les Misérables thanks in part to the fact that her character went through the wringer of misfortune before perishing on-camera. Other actors who have recently won Oscars for playing characters that died include (spoiler alert!) Kate Winslet in The Reader, Sean Penn in Milk, Christopher Plummer in Beginners, Christoph Waltz in Django Unchained, Daniel Day-Lewis in Lincoln, and both Matthew McConaughey AND Jared Leto in Dallas Buyers Club. (Not to mention the ambiguous fates of Natalie Portman in Black Swan and Leonardo DiCaprio in The Revenant.)

The double-whammy of a tragedy and a true story? Surely that'll be impossible for Academy voters to resist.

Although some performers have suffered a so-called "Oscar curse" after winning the little gold man, having a previous nomination rarely — if ever — hurts one's chances of winning. (In fact, given enough losses, you start getting the whole "overdue" thing going for you like Leo this year.) Stone already has one nod under her belt for her supporting performance in 2013's Best Picture winner, Birdman. That means the Academy knows who she is, they like what she does, and they probably won't hesitate to recognize her again given the right role.

Ever since 2005, every year Hollywood produces a list of what a select group of industry insiders consider to be the "best" un-produced screenplays they read that year. It's referred to as the Black List, and the scripts that are named on it typically become highly sought-after properties… and Letters From Rosemary is just such a screenplay. To be fair, not all Black-Listed scripts go on to great success when ultimately produced (see: Pan, Transcendence, Red Riding Hood), but a staggering percentage of them go on to widespread critical acclaim and even Oscar nominations.

Best Picture nominees that originated on the Black List since the List's inception include: American Hustle, American Sniper, Argo, Babel, The Descendants, Django Unchained, The Fighter, Frost/Nixon, The Imitation Game, Inglourious Basterds, Juno, The King's Speech, Life Of Pi, Little Miss Sunshine, Michael Clayton, Nebraska, The Queen, The Revenant, Slumdog Millionaire, The Social Network, Spotlight, There Will Be Blood, Up In The Air, Whiplash, and The Wolf Of Wall Street.

Even more eyebrow-raising about the film's Oscar chances is the studio that's producing the film: Anonymous Content, the same production company that was behind not only The Revenant, the film that won both Best Director and Best Actor this year, but also Spotlight, the film that ultimately beat it in the race for Best Picture. Although Anonymous' feature film resumé is relatively brief (Spotlight and Revenant are its only two BP nominees so far), it has been more prolific on the small screen, having produced such award-winning series as The Knick, Mr. Robot, and True Detective.

This news about Letters From Rosemary comes just days after reports that former Superbad co-stars Stone and Jonah Hill would be joining Maniac , a new TV series from True Detective director Cary Fukunaga, which just begs the question… is Emma Stone actively aiming for an EGOT?