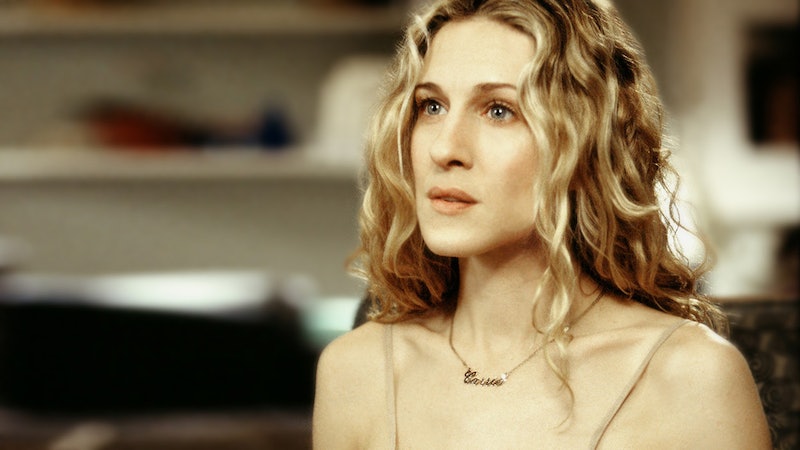 Confession time: I'm watching Sex and the City for the first time as a 24-year-old woman, because I am a shame to my generation and deserve to be stripped of my Millennial privileges. While readying myself to marathon six seasons of schmexy emotional angst, I was prepared for a lot of outdated things like unabashed wearing of overalls, the occasional insensitive remarks about sexuality, and smoking cigarettes indoors. What I was not prepared for was Donald Trump's cameo in Sex and The City , nor the oddly glowing reference to him that occurs as early as the pilot episode.

Needless to say, these mentions, while perhaps relevant in 1999 (don't ask me, I was watching Rugrats and hiding cheese crackers in my fists), are rather jarring to hear in 2016. While Carrie might have been able to predict the forecast of our socially inept Tinder dating, even she and her magic hair could not have predicted Trump's run for presidency, or the subsequent hella disturbing things that have come along with it. Hearing Trump get name-dropped in this '90s classic was like getting a surprise visit from the Ghost Of Political Weirdnesses Past through my laptop screen.

The first reference comes toward the end of the pilot, when Samantha spots Big at an event for the first time. "You see that guy?" Samantha asks Carrie, catching Big's eye. "He's the next Donald Trump, except he's younger and much better looking."

CUE THE RECORD SCRATCH. (And also my gag reflex.)

The second reference to Donald Trump is actually a cameo in Season 2, Episode 8, "The Man, The Myth, The Viagra." Yet again we are introduced to the idea of him by Samantha, who is having a cocktail after work in a restaurant where Donald Trump just happens to be doing Business-y Things That Business Guys Do In Restaurants at a table behind her.

Before you can even process what is happening, they are ON THE MOVE.

Here are all the reasons your brain doesn't want to wrap itself around this scene:

All in all, though, the scene is pretty insignificant. Donald Trump stands up and shakes the hand of the other man in the scene to close some sort of deal, and briefly makes eye contact with Samantha before walking out the door. I think the primary reason why the 10 seconds of Trump screen time is so jarring is because Sex and the City was considered such a liberal, ~radical~ show at the time for its portrayal of, well, sexuality, and the obvious liberal social leanings of most of the characters. If we're going to call Girls the modern day equivalent (in regards to open and honest sexuality and women having semi-existential crises every other week in the great city of New York), then a cameo with Donald Trump would be handled with significantly different implications — that is, if they even let him on the show at all.

There is one small comfort, however, in knowing that no matter how the political climate or trendiness of overalls may change, one thing will always remain the same: whatever the hell is going on with Donald Trump's hair.

More like this
14 Underrated Date Ideas To Try With Your Partner
By Lexi Inks
Bumble's "Compliments" Feature Lets You Message Before You Match
By Lexi Inks
Theo James Revealed The Truth About His 'White Lotus' Nude Scene & Fans Can't Cope
By Stephanie Topacio Long
'Waterloo Road' Is Back, With More Than A Few Familiar Faces
By Sam Ramsden and Vivian Iroanya
Get Even More From Bustle — Sign Up For The Newsletter