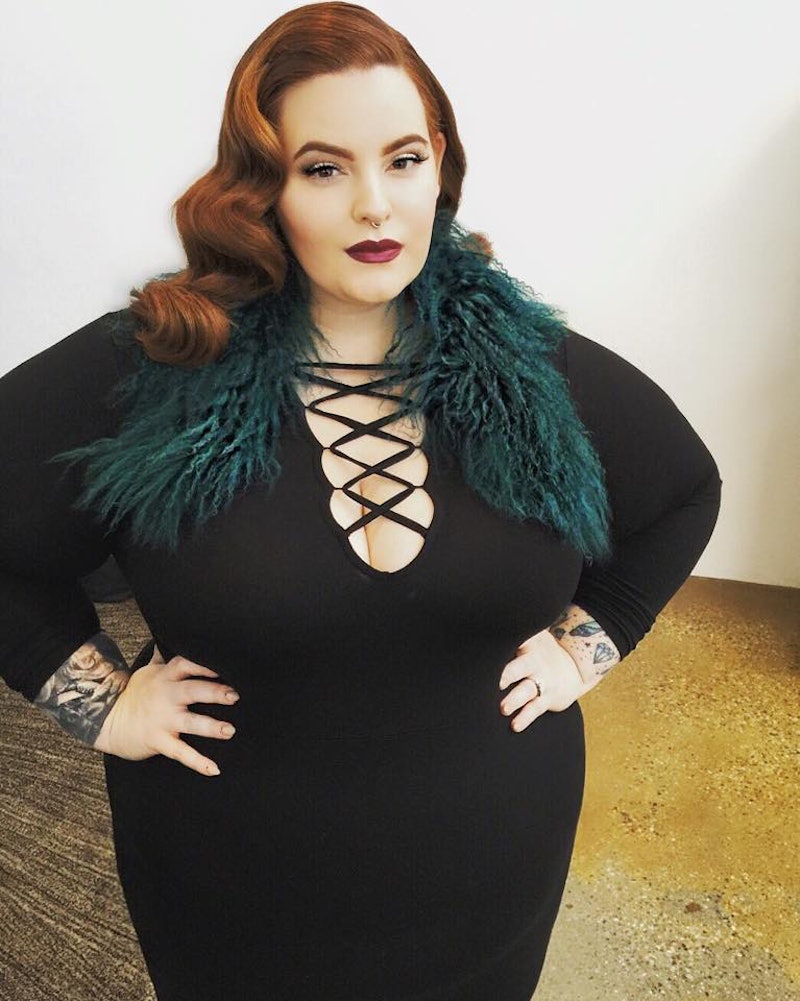 When I first set up a phone call with plus size model Tess Holliday, I asked my colleagues if anyone had a message or question they'd like to relay. Suzanne Samin, Romper's social media editor, chimed in. "Just that I love her and I used to watch her when she did YouTube videos with Cherry Dollface and she changed my life." It's a sentiment undoubtedly shared by many of Holliday's 1 million followers both on Instagram and Facebook, where comments like, "You are such an amazing person to look up to. Thank you for the daily courage," "[You] made me realize that being big is fun and fashionable," and, "I'm a skinny girl and lots of people tell me I have a bad body, but you show that there is no such thing," appear to far outnumber the health concern trolling and "ewwww's" and "I would rather kill myself than being overweight" remarks.

Holliday became a household name this year after signing with London-based modeling agency MiLK Management, becoming the first model above a size 20 to land such a major contract. Her newfound recognition only skyrocketed after she graced the cover of People Magazine in May. "If I had to pick one word, it’s been a very hard year," she tells me. "This year has been incredible professionally, but the hardest I’ve had personally."

Despite her recent "rising star" status, Holliday has been modeling since 2010. She founded the #EffYourBeautyStandards hashtag and subsequent movement in 2013. Her face was on Domino Dollhouse for years. And she's been reminding a lot of folks that fat babes can be badass beauty queens since way before "body positivity" became the trendy buzzword it is today. "There were a ton of women before me who were visibly plus size and who were radical pioneers in the industry, and they should’ve been in the media just as much as I’ve been in the media," she muses. "But for whatever reason, I was the first one thrown into it in this way."

And in the five years since she started modeling, Holliday has seen issues of fat acceptance and body politics evolve from independent corners of the Internet into full-fledged, globally-discussed topics. At the start of her career, she notes that the term "'body positive' wasn't really a thing," despite body positive beliefs being shared by communities involved in size acceptance issues. "Obviously radical voices like Marilyn Wann and Virgie Tovar came before me, but it wasn't as mainstream. Now I feel like it's trendy. And I see companies that I know for a fact aren't body positive using the term. I feel like it was a really positive place, but it's taken a negative turn."

While Holliday tells me, "This community completely changed my life. It gave me the group of friends that I have. It opened my eyes to so many injustices, and so many amazing things as well [...] If it wasn’t for this community, I wouldn’t have what I do," she feels that the more people have jumped on the bandwagon without the knowledge of what the body positive community is meant to stand for, the more the community has stopped being a totally safe space rooted in "changing the world."

Contrary to its overarching usage throughout 2015, body positivity has never been about simply stating, tweeting, or Instagramming "all bodies are good bodies" and calling it a day at that. Doing so could potentially help issues of body positivity in a micro sense, whereby an individual might feel better about their body or those of others in that moment. And while that's still incredibly important, making those statements alone likely won't combat grander sociopolitical issues.

The activism behind this movement has always been rooted in tackling inarguable marginalization of entire groups of people — which includes, but isn't limited to, plus size people — through combatting the legalities that perpetuate weight discrimination, reassessing the way we educate the public about health and weight, and deconstructing the body shaming so prevalent in our media. After all, we're still living in a culture where size discrimination can lend itself to a lack of medical services, increased likelihood of conviction, poor legal rights in the workforce, and ongoing bullying of fat individuals. We're still living in a time when doctors can flippantly blame weight for a person's abnormal medical symptoms, only for said person to later discover that they are suffering from a life-threatening, non-weight-related illness.

When it comes to body positivity's buzzword status throughout 2015, something Holliday hopes we begin to drift away from is the debate surrounding "being called plus size." Campaigns like #DropThePlus, spearheaded by model Stefania Ferrario and Australia's Biggest Loser host Ajay Rochester, have called for an end to the utilization of the term, deeming it disempowering and harmful. But Holliday disagrees.

"Many of us don’t want to be called curvy [instead of plus size]," she tells me, adding that she cannot help but feel that these types of conversations surrounding "plus size" terminology and plus size people themselves too often loop things back to health. #DropThePlus, for instance, was spearheaded by someone directly opposed to principles of Health At Every Size. "In an ideal world, it would just be great to be allowed to be who we are, and not have to defend our bodies or our health." Unfortunately, given the fact that "America has a multi-billion dollar diet industry," Holliday does fear that such change "is likely never going to happen." But she's hopeful in that the recent trend status of body positivity will at least mean that "voices will continue to get louder."

Not all of 2015 has been seamless for Holliday, however. As with any rise to massive fame, there have been the inevitable discouraging setbacks. From 2014 to late 2015, hundreds of customers rose concerns that they hadn't received #EffYourBeautyStandards tees they had paid for in Nov. 2014, leading also to the suspicion that Holliday hadn't made a donation to the National Coalition Against Domestic Violence as promised (the NCADV has since confirmed to Bustle that a donation in the four figures was made in Dec. 2015).

Holliday has since released an official statement both to Refinery29 and Bustle as a direct apology, chalking the confusion up to to an error in the ordering process, and hopes to use the experience as a learning opportunity. "It’s really hard to see Eff Your Beauty Standards associated with something so negative," she tells me. "But it’s been a very humbling and I’ve learned a lot."

Despite the mainstream co-opting of body positivity and her personal struggles with going more mainstream, Holliday has high hopes and big plans for 2016. As well as ensuring that all remaining merchandise-related issues are rectified moving into the new year, Holliday has other retail aspirations for 2016 — mainly the release of a full clothing line. Although few details have yet to be revealed, she does tell me that she's "working hard to make sure [plus size people] don’t have to wear terrible prints anymore." After all, there is most definitely more than one fat babe in this world tired of the dreaded paisley print tunic.

In the meantime, Holliday plans to continue volunteer work with the Downtown Women's Center in Los Angeles and the homeless women of skid row. "Many of these women are in domestic violence situations, about three out of four of them," she tells me. As both Holliday and her mother were victims of domestic violence themselves, it's a cause she will continue to strive her best to serve.

Holliday will also be hosting the Miss Wheelchair California Pageant, an organization established in 1976 with the goal of elevating individuals with disabilities, in 2016. "I feel like efforts in body positivity such as these becoming known on a global level is so important," she tells me. Visibility for disabled individuals is one area of body positivity Holliday hopes to see get more traction in the new year.

Perhaps this is partially the reason that Holliday's greatest takeaway from 2015 is her involvement with H&M's Close The Loop campaign, which aims to make fashion more sustainable by encouraging the recycling of old clothes to make new ones. "People criticized my outfit for being unflattering, but I was just happy," she tells me. "When I saw the final product, I was crying. It did such a good job at showing people of all walks of life, all backgrounds, all abilities." It's that kind of inclusivity that Holliday hopes to see more of in the body positivity movement and world at large as we move forward.

This year, Holliday will continue to strive for a balance between mental health and a life largely rooted in social media and online activism. "There are pioneers of the movement who have distanced themselves, and part of me gets worried because I know that I have days when I don’t even want to do it, and I question why I do it," she tells me. "It’s the people from the outside who don’t understand the community and think we’re 'glorifying' an unhealthy lifestyle or whatever. But it seems like the body positive proponents who have their bad days will take their hiatus from social media, and then they get back up. They inspire me to do the same."

And at the end of the day, Holliday is still cracking on through her social media platforms and very likely inspiring more than a mere handful of people to get back up on the shitty days, too. "I’ve chosen to dedicate my whole career to helping other women," Holliday tells me. "To help all women, but especially visibly plus size women, have a voice in the industry." So if 2015 was the year plus size women truly began to have a voice in the industry, perhaps 2016 will be the year that plus size women above a size 20, like Holliday herself, get some equal representation as well. Perhaps it will be the year that plus sizes begin to be carried in stores as frequently as they now are online. With proponents of body positivism such as Holliday at the forefront, perhaps it will be the year "all bodies are good bodies" becomes less about a catchphrase and more about a revolution.

More like this
Androgynous Formal Wear That Will Make You Feel *So* Fancy
By Megan Lasher
Here’s Your Daily Horoscope For October 4, 2022
By Mecca Woods
How To Pack For A Move
By Marilyn La Jeunesse
Constance Wu On Self-Doubt, Family Drama, & Her Sister's Unwavering Support
By Constance Wu
Get Even More From Bustle — Sign Up For The Newsletter