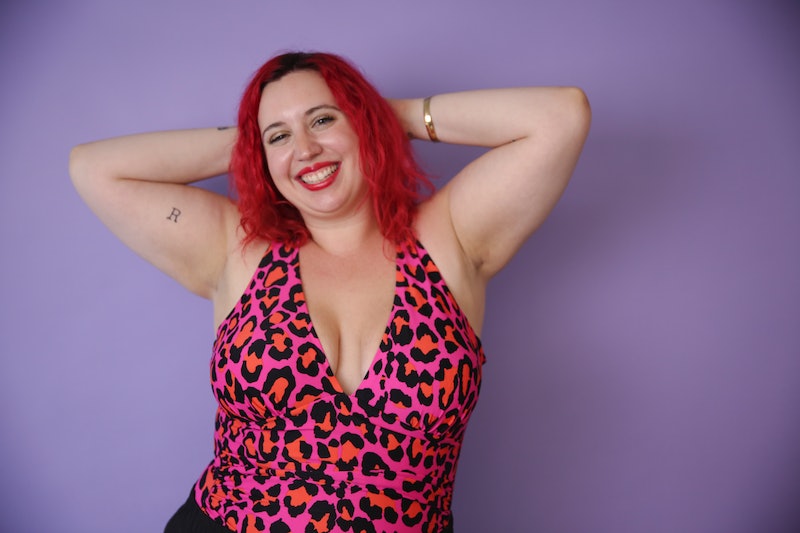 For a lot of us, slathering on deodorant every morning has become so second nature that we rarely stop to consider what deodorant actually does to our bodies. Sure, some of us choose not to wear it (which is totally OK) and some people literally don't even need to. But for those of us who do, the odds that we stop and think about how deodorant actually works are minimal.

Everyone knows that deodorant keeps us from stinking — because that's kind of the whole point of wearing deodorant in the first place. The sole purpose of deodorant is to prevent body odor. Antiperspirants, which are technically a subtype of deodorant, function a bit differently — they keep us smelling fresh while simultaneously employing aluminum to stop up our sweat ducts and keep us from sweating excessively. However, it's worth nothing that even antiperspirants can't really keep our sweat glands from excreting some sweat; and on top of that, our bodies can become immune to the antiperspirants' sweat-reducing effects after awhile.

But what you might not know (and what I definitely didn't know before I started researching for this article) is exactly how deodorant keeps us from smelling like ripe armpit all the time. Admittedly, deodorant is nowhere near as complex as antiperspirant. That said, if you (like me) wear only antiperspirant-free deodorant, here are four things you should know about what deodorant does to our bodies.

Believe it or not, sweat isn't inherently smelly. In fact, as the Huffington Post pointed out in their article about deodorant, sweat itself is nearly odorless. Body odor only happens when your body's bacteria breaks down one of two types of sweat on your skin —so that onion-y BO smell emanating under your arms doesn't actually show up until after you've been sweating for a little bit, and your sweat has had an opportunity to hang around on your skin.

Since deodorant contains some antibacterial agents, it's able to kill that odor-causing bacteria and keep you smelling clean — but that's all it does. Which brings me to the next point...

2. Deodorant Doesn't Keep You From Sweating

Though the terms "deodorant" and "antiperspirant" are used interchangeably by many of us, they really shouldn't be — because deodorant and antiperspirant work very differently. As we've already discussed, deodorant does help keep body odor under control, but it doesn't keep your sweat glands from doing their thing. The aluminum in antiperspirants, however, does cut back on sweat by stopping up the eccrine sweat gland. If you prefer to deal with as little armpit sweat as possible, antiperspirants are probably the best bet for you — though keep in mind that even antiperspirants that claim "24 hour protection" are only required by the FDA to decrease sweat production by 20 percent.

3. Deodorants Can Change Your Body's Bacteria

As LiveScience reported back in February, "The use of antiperspirants and deodorant alter the skin microbiome, according to a new open-access study published in the journal PeerJ on Tuesday (Feb. 2)."

In the above-mentioned study, researchers swabbed the armpits of 17 participants for eight days straight. On the first day, all participants stuck to their normal underarm hygiene routine, but on days two through six, they stopped using deodorant and antiperspirant altogether. Then, on days seven and eight, all participants applied antiperspirant. The results? Everyone's armpits showed considerably more bacterial activity during the time period when they were going all-natural.

"Those who had used deodorant at the beginning of the study showed a pattern in which the odor-causing bacteria and the common skin bacteria group Staphylococcaceae swapped. After two and five days of stopping use, deodorant users' microbiomes were 29 percent Corynebacterium, 61 percent Staphylococcaceae, 5 percent Anaerococcus and 5 percent other."

Though it's yet to be determined whether these deodorant and antiperspirant-induced changes to our natural bacteria are harmful or not, researchers are still on the (sweaty) case.

4. The Link Between Deodorant & Increased Breast Cancer Risk Is Not Conclusive

You've probably heard some people say that women who regularly use deodorant and antiperspirant could increase their risk of developing breast cancer later in life. While this concern is not as odd as it may initially sound — it's grounded in the theory that the aluminum in antiperspirants and the parabens in deodorants have been shown to cause estrogen-like, hormonal effects, which could potentially promote the growth of breast cancer cells, and a few scientific studies have been published that have suggested a potential connection — the National Cancer Institute and the FDA do not support claims that there is any link between deodorant or antiperspirant use and cancer. As the NCI states on their website:

"researchers at the National Cancer Institute (NCI), a part of the National Institutes of Health, are not aware of any conclusive evidence linking the use of underarm antiperspirants or deodorants and the subsequent development of breast cancer."

So if you use an antiperspirant or a deodorant containing parabens, you probably don't need to throw it out. Just keep in mind that, though the evidence that these products contribute to higher breast cancer risk isn't conclusive right now, research is still being conducted, so staying informed on the progress of these studies can only work in your favor.