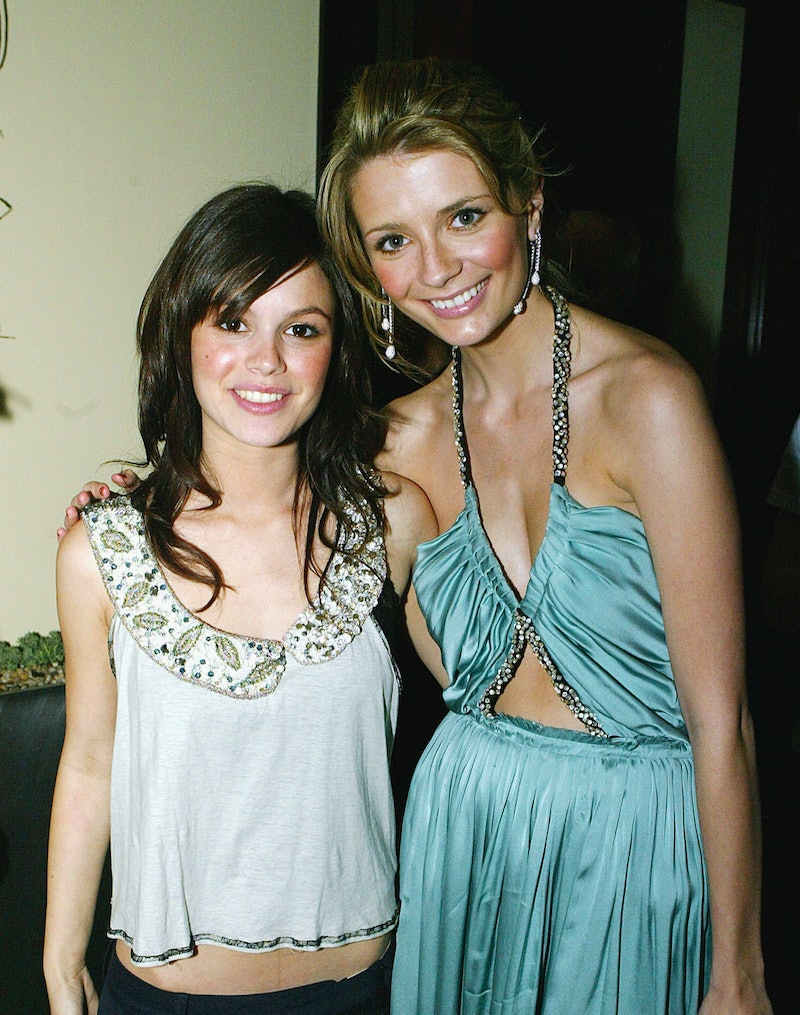 It never gets old when actors from a beloved hit series support one another. On Tuesday, Rachel Bilson supported Mischa Barton during her Dancing With the Stars debut with the cutest Instagram. During the Season 22 premiere, Bilson took to social media to show her former The O.C. co-star some major love. Alongside a photo of Barton and her dance partner Artem Chigvintsev, Bilson wrote, "Got to give it up for @mischamazing takes balls. Get it guurrrrlll!" Such a Summer response, right?

Despite The O.C. ending over nine years ago, it's clear that Bilson and Barton still only want the best for one another. Basically, they are just like their O.C. characters, Summer Roberts and Marissa Cooper, who were the best of friends. No matter what and through all of the bad, Summer and Marissa had one another's backs.

Speaking of these two backing each other up, remember that time a rumor circulated suggesting Bilson hated Barton? Not only did Bilson's rep quickly deny such ridiculous allegations to E! News in November 2013, but Barton took to Twitter and called it "hilarious." Well, if you need more evidence to disprove this rumor, now you have it. Bilson's Instagram definitely proves there is nothing but love between these two.

You know? The same can be said for the other O.C. stars, Ben McKenzie and Adam Brody. Even since leaving their California-based characters behind in 2007, they are still supportive friends. For example, despite McKenzie not attending Brody's wedding to Leighton Meester in February 2014, he still couldn't help but gush about him.

"I did not go to his wedding," the Gotham star told HuffPost Live in October 2014. "I think they wanted to kind of keep it super low-profile, so I did not take umbrage." That's a true friend. Plus, he even praised Meester. "His wife is awesome," he said. "Leighton's great." If that isn't enough to make O.C. fans freak out, the two still get together from time to time. As he told HuffPost Live, "Adam and I stay in touch. We just saw each other in New York the last time he was here."

Yep, there's no breaking up these former co-stars.

Back to Bilson: Do you think she'll show up to a DWTS taping? Here's hoping a mini-O.C. reunion happens either before Barton gets eliminated or on the Season 22 finale. I don't want to push my luck, but seeing as Bilson is rooting for her former co-star, maybe that means Brody and McKenzie could attend one of her performances with Bilson.

I'll just be over here practicing my jive and crossing my fingers that some type of O.C. reunion happens and fans can see the cast supporting one another on live television.

More like this
What’s New On Netflix: 'Never Have I Ever' & 'Indian Matchmaking' Return
By Arya Roshanian
Everything To Know About The HBO Max & Discovery+ Streaming Service Merger
By Brad Witter
What’s New On Netflix: 'Bridget Jones’s Diary' & 'Monster-in-Law'
By Arya Roshanian
Kim Kardashian’s “Gym Time” Video Features A Bikini & Thigh-High Boots
By Grace Wehniainen
Get Even More From Bustle — Sign Up For The Newsletter