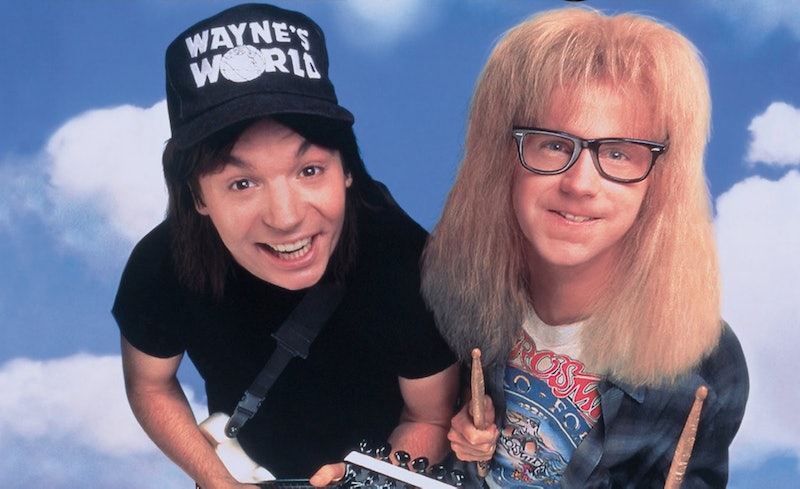 I can spout off full screenplays of my favorite ‘90s movie comedies faster than I can recall my own social security number. So can you blame me for forgetting just how off-the-wall some of that dialogue really is? If you’re like me, you grew up on this stuff. Without Netflix and Hulu, you watched the same few movies that you bought on VHS with your allowance (from Sam Goody or Suncoast, probably), over and over again. The repetition was great for memorization, not so great for realizing that no one in real life actually talked like that. The dialogue from your Adam Sandler and Kevin Smith movies sounds even more odd when you separate it out. These 14 ‘90s movie quotes sound weirder on their own than they do in context.

Read on to test your memory of these bizarre, out-of-context quotes. I bet that in a few cases, your brain will automatically supply the line that comes next. But try also to appreciate the pleasing absurdity that is these quotes standing on their own.

1. "This young man will be caught, deep fried in a vat of hot oil and served to our first hundred customers. Just another tasty treat from the gang at Empire Records."

The Empire Records one-strike shoplifting policy would be out of place in another music store.

2. "Ace, this is not the time. If Einhorn comes down here and sees me talking to you or your ass, I'm history."

Everyone has a friend like Ace Ventura, right? They won't stop texting you during the day while you're trying to get things done. Sometimes, they actually come to your work uninvited and force you to have a conversation with their butt cheeks.

3. "Allow myself to introduce myself. My name is Richie Cunningham, and this is my wife, Oprah."

Athletes and their superstitions. In Cool Runnings, the Jamaican Bobsled team relied on a chant and an egg.

5. "I mean, that's what life is: a series of down endings. All Jedi had was a bunch of Muppets."

One pro of being stuck in a minimum wage service job like the guys in Clerks is the ability to sit around all day debating the most existentially significant Star Wars movie.

In The Wedding Singer, Robbie loses his fiance when he loses his rock star cool. But it only takes one pair of David Lee Roth stretchy leggings to get that back.

7. "Are you crazy? A man in a really nice camper wants to put our song on the radio!"

The band in That Thing You Do! never heard the warning, "Don't take record contracts from strangers."

8. "If you blow chunks and she comes back, she's yours. But if you spew and she bolts, then it was never meant to be."

This Wayne's World pep talk may be gross, but it's actually solid relationship advice too.

Ever try to drop this reference in front of anyone who's never seen the seminal modern classic Mrs. Doubtfire? The confusion is deep and real.

10. "This is a sin, it's a wicked indulgence. Didn't they have any butter pecan?"

Deloris Van Cartier has a lot to teach her nun friends about treating themselves in the first Sister Act movie. It's the little things.

11. "You think I got kicked out because of just the aquarium? Nah, it was the hand job. And you know what else? It was worth it."

Not the rules always. Just the rules of Scream and every horror movie it takes its set of standards from.

13. "I spend half the night talking to some girl who's looking around the room to see if there's somebody else who's more important she should be talking to. And it's like I'm supposed to be all happy 'cause she's wearing a backpack, you know?"

In defense of Swingers, backpacks were huge that year. Especially the tiny ones that couldn't hold more than $20 and a Bonne Bell lip balm.

That kind of insult to the monarchy only works in The Lion King.

Weird? Absolutely. But these movie quotes are ingrained in my memory, and I kid because I love.