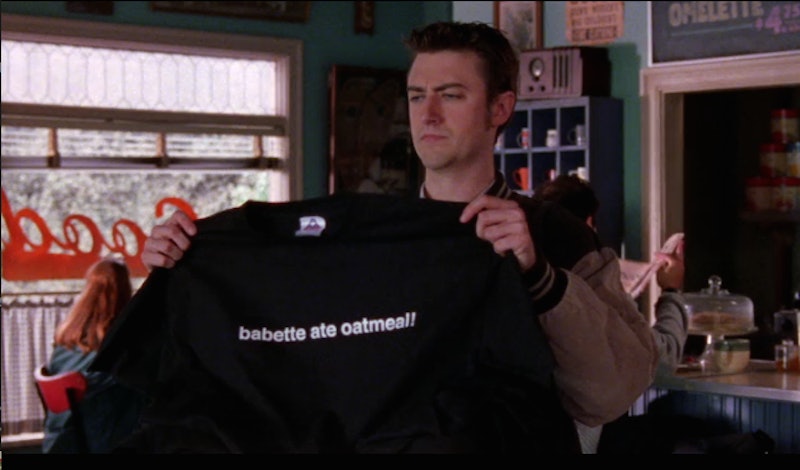 There isn’t much that I don’t love about Stars Hollow. Give me a Netflix subscription and a free couple of hours, and I will happily sink into that town until my eyes blur from looking at the screen for too long. But, even this perfect little fictional town where the majority of Gilmore Girls takes place has its imperfect moments. Like all the times Stars Hollow was way too mean to Kirk, the man who did just about everything in that town and who also happened to be the show’s comedic relief.

Hey, I get it. Kirk was a narrative device — a way to break up the storylines, to relieve the tension between Rory and all of her romantic interests, and a way to bring levity to the show’s more serious moments. But, that doesn’t mean that he had to be the town’s punching bag. Sometimes that's exactly what it felt like he was, though, and that's totally unfair.

Kirk may have been annoying at times — OK, a lot of times — but he was also an undeniably sweet guy, one who would (and did) do just about anything for anyone in Stars Hollow. But, if you ask me, it wa way too often that the townsfolk took advantage of Kirk’s generosity. Just look at some of these moments when Stars Hollow was particularly cruel to poor Kirk Gleason.

1. That Time He Performed An Interpretive Dance Number About Life And Death

And pretty much everyone in the audience laughed at him. I get that he’s the town clown, but there is room for compassion here, people.

2. Every Time He Was Taylor’s Lackey

Aka at every town meeting, every town function, and just about any town event ever.

3. That Time Luke Encouraged Him To Ask Lorelai Out

He knew full well that was never going to happen. Not cool, Luke.

4. When He Was Bullied As A Kid

This was hinted at during his first date with Lulu, but it seemed like he expected this date to really be one elaborate joke Lulu was in on — and it was really kind of sad.

5. When Luke Yelled At Him For Opening Kirk’s

He just saw a need and decided to contribute! What’s wrong with that?

6. When Lorelai Flirted With Him To Get A Table

Is there any way that this guy won’t help out his fellow townsfolk? Even if it means putting his relationship with Lulu on the line?

7. When Lorelai And Rory Used His Pedicab And Never Paid

He hauled them across town for nothing, apparently.

8. When He Made Really Cool Shirts And No One Bought Them

I would totally buy one of his shirts.

9. When No One Appreciated His Art Film

What’s not to love? It was a classic!

10. That Time Lorelai Didn’t Let Him Sell A House To Her Parents

And just when his real estate business was getting off to a booming start.

11. That Time Lorelai Yelled At Him For Leaving The TV On During Breakfast

The minute he moved in with her, Lorelai started bossing Kirk around like a child. Not fair!

I mean, really, Stars Hollow. What did this man ever do to you?