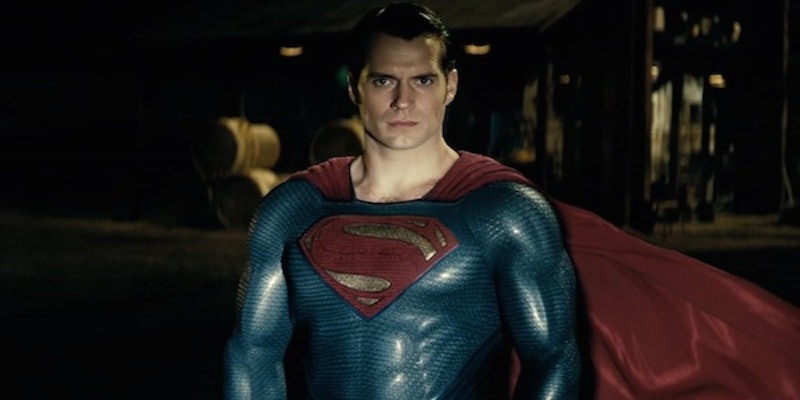 Batman v Superman: Dawn of Justice is almost here, and with its arrival, the DC cinematic universe is expanding. The film follows the story of a grizzled older Batman, who heads to Metropolis when he sees the type of destruction Superman is capable of. The Dark Knight doesn't know if he can trust the Son of Krypton, so he decides to declare war on his fellow superhero. But since the movie's subtitle is Dawn of Justice, which implies that the film is setting the stage for a Justice League movie, other heroes besides Bats and Supes are going to have to get involved. So which superheroes might be in ' Batman v Superman '?

In case you're not familiar with what the Justice League is, it's essentially DC Comics' version of rival Marvel's Avengers. However, while the Avengers started out as more of a team of B-level heroes before attracting Marvel's A-team, the Justice League has always been made up up DC's heaviest hitters. The team debuted as the Justice League of America in 1960, three years before the Avengers, and the original seven members of the team were: Superman, Batman, Wonder Woman, the Flash, Green Lantern, Martian Manhunter, and Aquaman. Like I said, pretty strong lineup. So with Batman v Superman set to lay the foundation for the Justice League movie, these are the heroes who are expected or rumored to appear in the film.

Ben Affleck becomes the fifth actor to portray the Caped Crusader on the big screen in the last 25 years. His version is older, beefier, and based on what's been revealed of the movie so far, meaner.

Henry Cavill returns as the Son of Krypton following his starring role in 2013's Man of Steel. He'll be forced to do battle against Batman, while Lex Luthor (Jesse Eisenberg) plots against him in the background.

After nearly 75 years since her creation in the pages of DC Comics, the world's most famous female superhero is finally set to make her big screen debut in the film, portrayed by Gal Gadot. Going by the alias Diana Prince, Wonder Woman has a ton of origin stories, but in the film she's said to be a 5,000-year-old Amazonian warrior and the daughter of Zeus.

Aquaman is the King of Atlantis, but more notably, he's basically a punchline in the world of superheroes. However, with the film's casting of actual human monster Jason Momoa in the role, it's safe to say nobody's going to be laughing at Aquaman now.

Ray Fisher portrays this character, whose history is much shorter than the other heroes in the film. Making his first appearance in 1980, Victor Stone becomes the half-robotic Cyborg after a near-death experience, when his father rebuilds him using his own inventions in order to save his life.

In a move that upset some fans of the CW's The Flash, the film cast a different actor in the role of the speedster. Ezra Miller will play Barry Allen in the film, in what has been confirmed as a cameo by EW following months of rumor.

Actress Jena Malone has a mystery role in the film, but most fans believe she'll be playing Barbara Gordon, the daughter of Batman ally Commissioner Gordon and the secret identity of the hero, Batgirl.

The last DC movie not starring Superman or Batman, 2011's Green Lantern was loathed by fans and critics alike. With a new film, Green Lantern Corps., slated for 2020, the character is due for a reboot in time for the Justice League movie. Some fans believe actor Dan Amboyer, who's credited as "Drone Pilot" in Batman v Superman, is in actuality playing the character who will inherit the power ring.

Those are all the heroes who are confirmed and rumored to appear in Batman v Superman, and like I said, it's a lot. Is it too many? That will likely depend on how they're used, but DC Comics has a lot of ground to make up in their battle for supremacy with Marvel, and it looks like they're not wasting any time in accomplishing that.