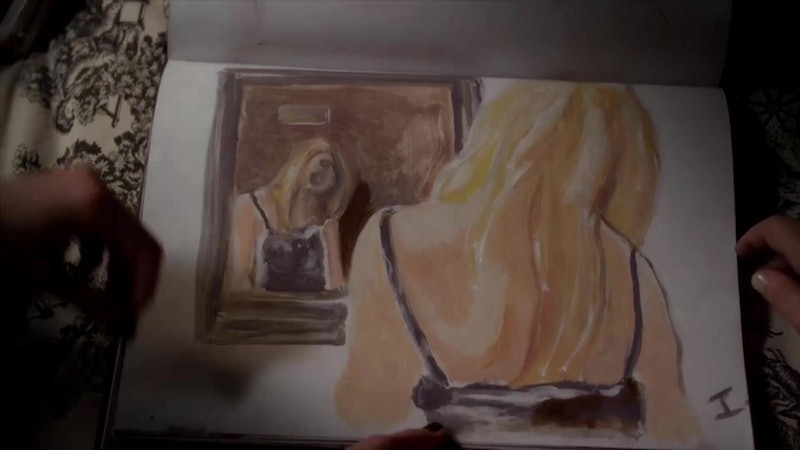 It's not unusual for Pretty Little Liars to end its season with fans asking even more questions than they did when the season started. That's definitely the case with the Season 6 finale of Pretty Little Liars, which gave us plenty of reveals but even more burning questions. One thing we can officially stop speculating about is the identity of Pretty Little Liars' long-anticipated identical twin, which was creepily revealed in the finale episode "Hush, Hush, Sweet Liars." The episode revealed not only that Mary Drake is Jessica DiLaurentis' twin, but also that she's so much more than that: Mary is Charlotte's biological mother, and a former Radley patient herself. One thing that she's most likely not, though, is the mysterious A.D., who signed off the text to the Liars and whom showrunner I. Marlene King confirms is Uber A. So who could possibly be this elusive character? I firmly believe there's reason to speculate that Bethany Young's father could be A.D. and the one hiding in plain sight.

If you can't place a face or a name to Bethany's father, that's totally OK: the show has never revealed either. However, just because we don't know much about him doesn't that he's not a big-time player in the A game. In fact, Bethany's dad is surprisingly connected to the entire A storyline, even though he's stayed mostly out of the picture. Back in Season 5, the Liars discovered that Bethany's dad had an affair with Ali's mother, which, at the time, was speculated to be Ali's motivation for killing Bethany. That never happened: instead, it was Bethany who went to track down Jessica in a fit of rage. It was Mona who hit Bethany with a shovel, believing it was Ali, which led to Melissa accidentally burying Bethany alive. Though we only saw Bethany's face once, she's a big part of the Pretty Little Liars mythology — and her father might be as well.

Right now, we know that Mary is Charlotte's biological mother, but we have no idea who Charlotte's father could be. That's where Bethany's dad could come in: what if it was actually Mary who had a longterm affair with Bethany's father, leading to Charlotte's birth? Bethany's father could have been juggling his relationship with his wife (aka Bethany's mother) and Mary for a long time without either Charlotte or Bethany realizing that they were actually siblings. When Charlotte was admitted to Radley, Bethany could have finally learned the "truth" from Mary, who, at the time, was posing as Jessica so she could visit her daughter without issue. Perhaps it wasn't simply that "Jessica" was having an affair with her father that made Bethany so mad — it was that her father now had another daughter to divide his love between.

This theory is certainly complicated, but it definitely explains the Bethany connection while giving the show another person who would want to seek vengeance for Charlotte's murder. Perhaps Bethany's father felt guilty for not being there for his older daughter Charlotte, and decided he would avenge her murder in order to make amends — or he's just as much of a vengeful nightmare as Bethany was.

Here's hoping that we find out about Charlotte's parentage soon: it might give us ultimate answer as to who our Uber A is.

More like this
Everything To Know About The 'Pretty Little Liars' Reboot On HBO Max
By Mary Kate McGrath and Jack Irvin
What Is the Net Worth Of Each 'Stranger Things' Season 4 Cast Member?
By Hugh McIntyre
20 Photos Of "Beefy" Jeremy Allen White To Tempt You To Watch 'The Bear'
By Radhika Menon
Everything To Know About The Flash Season 9
By Brad Witter
Get Even More From Bustle — Sign Up For The Newsletter