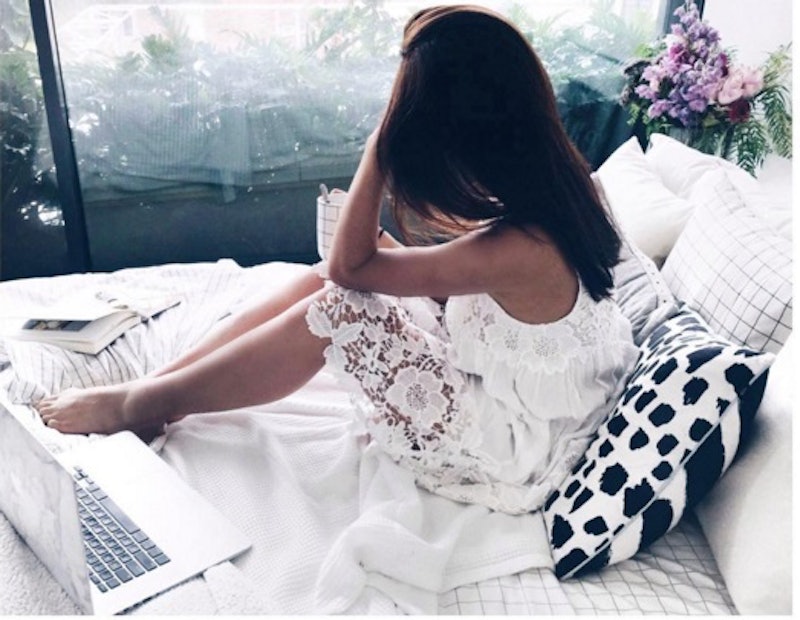 The idea of opening yourself up to either rejection or acceptance is a scary thing. Letting yourself be vulnerable feels like asking for an afternoon of eating ice cream and listening to sad Celine Dion songs — when does putting your feelings and hopes on the line ever actually work out?! But while it can seem like we're protecting ourselves with that kind of reasoning, it's actually a very damaging thought process to let yourself dabble in. Rather than teaching yourself to become comfortable with human interaction, with being honest over what you hope to achieve and work towards, become used to the idea of sticking out your neck and trying for something new, you teach yourself that these are all things to be avoided.

Why? Chances are because you don't think it's possible for you to have them in the first place, which means you don't think you're worthy of having that type of happiness. And that's a hella damaging thing to tell yourself, and completely untrue. That's why it's important to teach yourself ways to become more vulnerable — in that way, you simultaneously teach yourself you're worthy of love and happiness. So let's do this! Below are seven ways to let yourself become more vulnerable.

Listen to: The Power of Vulnerability: Teachings of Authenticity, Connection, and Courage, $29.95, Amazon

1. First Thing Is First: Accept That You're Worthy

In order to become okay with vulnerability, the first thing you need to do is accept the fact that you're worthy to get a positive response back. If you're opening up to someone else, believe that you're enough to warrant love and respect back. If you're reaching for a goal or dream, believe you have the skills and determination to make this work. You can't go far if you yourself believe you don't deserve positive results.

Try: The Gifts of Imperfection: Let Go of Who You Think You're Supposed To Be and Embrace Who You Are, $9, Amazon

2. Fight Your Skiddish Tendencies By Knowing What They Are

When you're on the cusp of being vulnerable the need to flee can be knee jerk, but you'll begin to regret that avoidance tactic by the time you're down the street and out of harms way. Pull in the reigns on that by becoming well attuned to the way you feel right before you bolt, and train yourself little by little not to listen to your urges to get away.

But how do you become familiar with such a fast and intense feeling? It's going to take some trial and error, and a list. Lifestyle and health writer Katherine Schreiber at self development site The Greatist offered, "It can help to jot down the emotions you feel from breakfast to bedtime — and how you acted on those emotions — in a diary. Becoming more aware of your thoughts, feelings, and behaviors helps clue you into what’s really going wrong." So the next time you missed a chance to be vulnerable and closed down, write everything that went through your head and what you felt before, during, and after. Knowing your signals and triggers will help you stop them the next time around.

3. Stop Yourself When You're Resisting

When you feel yourself approaching a vulnerable moment, don't clench. Don't put up the wall and the pretenses that'll keep you hidden, but rather give yourself permission to experience the feelings that you'll have as a consequence of your vulnerability, good or bad. Whether if it's not bailing from an intimate moment with a person, sharing a hard truth you're not proud of, not fluffing a situation a bit to make yourself seem better, or sharing something embarrassing, accept that you'll have to eventually get used to those kinds of emotions, so today might as well be the day.

Therapist Erin Moline told self development site Good Therapy, "Feel the energy of your body, emotions, and mind. Feel whatever pain you may be having. Don’t label or think about it, just sense it fully. Don’t push anything away. Breathe." Absorb it all, and don't be scared to feel.

4. Trust That You Can Deal With The Outcome, No Matter What

It's a sucky feeling when you share a part of yourself and you get rejected or, worse yet, are met with indifference. But the thing is, that's all that the consequence is: A varying level of hurt. While that's not ideal, you know that you have the emotional strength to pull yourself back up by your socks and deal with it. You might have to lick a couple of wounds, but you're strong. You have enough in you to handle the worst.

And that's how you free yourself to become vulnerable: By having the knowledge that even if there's a backlash or a disappointing answer, you can work your way through it and get back to the other side. So it's worth the shot.

Psychologist Leon F. Seltzer, Ph.D. from Psychology Today explained, "Feeling that we possess the emotional strength to quiet our temporarily jangled nerves, we don't need to flee from the situation . . . or ourselves. And being able to confront our vulnerability and persuade ourselves that the circumstance is not as worrisome as it might feel, reduces our anxiety and restores in us a sense of control." Don't let yourself forget that you're strong and that you can handle this.

Say you did open up and got hurt in some way. If you're bad at showing vulnerability, your instinct might be to go back to your room and deal with the feelings and fall-out all on your own. But that's a mistake.

If you open up about your feelings, failures, and thoughts to someone you trust, you not only get help on the soothing forefront, but you get another shot at practicing vulnerability. Seltzer offered, "it's important to keep in mind that depending on others to soothe us can actually increase feelings of vulnerability." You're opening yourself up to another person, which is great practice.

6. By Not Being Vulnerable, You're Giving Away The Power To Hurt You

When you open up yourself to be vulnerable, you make the conscious decision that what you're showing and offering other people is worthy. You believe that when you extend yourself, they'll accept and that you're worth that acceptance. So in reality, allowing yourself to become vulnerable makes you safe from harm because you already know on the inside that you're good enough. If things don't work out that's not a reflection on you but the circumstance or situation.

Jennifer Kass at self development site Mind Body Green explained, "It's only when we close our hearts and put up protective barriers that we are at the mercy of everyone and everything around us — from this place we become victims of our circumstances and give away our power by letting external things and other people control how we feel." When you don't become vulnerable, you internalize the feeling that you're not worth the acceptance and love, which gives others the power to hurt you. If you really want to protect yourself from bruising, become vulnerable.

7. Realize You're Already Hurting Yourself With Inaction & That You Can Only Go Up From Here

It might seem like you're protecting yourself by not letting yourself become vulnerable, but really you're only ensuring that you'll stay disappointed. Think about it: You're sad that you didn't let yourself play out that one emotionally-charged conversation; you feel bummed you let that one opportunity slip by because you thought you would make a fool of yourself; disappointed you didn't let yourself try for a better situation.

But if you open yourself up and go through that vulnerable moment, you have a 50/50 chance towards happiness. And that's already infinitely better.

Brené Brown, Ph.D, wrote in her book, Daring Greatly: How the Courage to Be Vulnerable Transforms the Way We Live, Love, Parent and Lead, "I can honestly say that nothing is as uncomfortable, dangerous, and hurtful as believing that I’m standing on the outside of my life looking in and wondering what it would be like if I had the courage to show up and let myself be seen." Don't jip yourself a shot a being happy. Open yourself up and see what happens — contentment might just be on the other side.

Daring Greatly: How the Courage to Be Vulnerable Transforms the Way We Live, Love, Parent and Lead, $9, Amazon