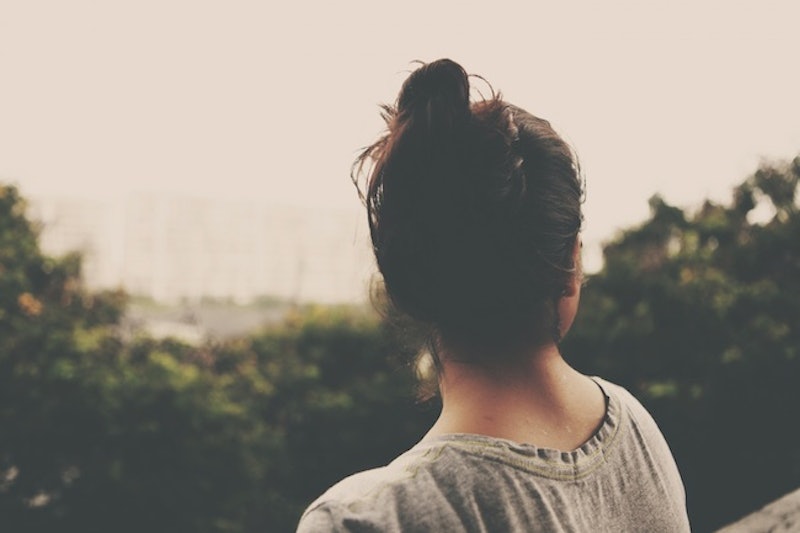 Insecurity can be a pretty tough thing to define in human psychology, because it's created from a lot of different elements: social anxiety, depressive tendencies, negative thought patterns, and an inability to feel safe can all combine to make us feel insecure. Fundamentally, though, insecurity is the expression of low self-esteem, a fundamental lack of belief in the safety and nourishment of your own self-worth. We most often hear about insecurity in the context of relationships, where it can wreak havoc — because insecure people find it incredibly difficult to rely upon and relax into anybody else's love, and constantly fear its disappearance. But it can also pop up in virtually any part of a person's life, from employment to friendship to body image. So how can you help a friend suffering from a seriously crippled sense of self-esteem?

First of all, you are not their primary source of security. Insecure people need to be able to call on their own worth; relying on others to supply it for them won't help them in the long run. So you need to find ways of being supportive that help them to develop that sense of self-worth, not attempt to replace it. Tricky? Yes. But it can be done. I speak as a person who has fits of insecurity so bad they've led to severe isolation and insomnia: this is not a picnic, and we appreciate a bit of a helping hand.

Here are nine ways in which you can help a friend suffering from crippling insecurity. Bringing them flowers is a start, and a hug's always a good finish, too.

1. Don't Tell Them They're Wrong

"What are you talking about? You're so skinny/smart/successful!" may seem like a valid or kind response, but what an insecure person will hear is: "Not only are you a failure at XYZ, nobody believes you." Validation of feelings is important; it's OK for them to feel this way, and it's important for them to know that you're hearing them, even if you believe the thoughts are coming from an irrational place and spiraling into fear. There's a difference between noticing feelings and completely shutting them down.

The best way to encourage somebody to feel better about an insecure situation is to give them concrete evidence of their own worth. Get them to remind themselves of the times when they have felt better about their own life, whether it's sporting achievements, photographs, great grades or whatever else. Chances are that these are the reassurances that will really strike home, because they're objective. Subjective stuff can be very easily dismissed in a fit of insecurity.

3. Don't Say You're Envious Of Them

"Are you kidding? I'd love to be in your position" may also seem like the most flattering way to deal with a person's insecure feelings. But again, it's adding your perspective in a way that's not necessarily helpful. Making them aware that you envy them or that they make you insecure will likely only create more complicated, self-critical feelings in their insecurity cycle. Being the cause of somebody else's worries is rarely the cure to your own.

4. Help Them Find The Roots Of Their Insecurity

If they have a therapist, encourage them to talk about this with them. If not, ask gently what they think makes them feel this way — because insecurity doesn't come from a vacuum. It's often focused around something that has been drilled into us as a weakness or a point of serious importance since we were very small: our academic achievement, beauty, job performance, relationship stability, popularity, whatever. Sometimes insecurity isn't about how we feel now, but a repetition of how we felt once in our past. However, this is a method best practiced with a mental health professional; if your friend responds well to your tentative discussion of this issue, it might be a good jumping off point to talk to them about getting into therapy.

So how can you give somebody with insecurity a bolstering, supportive reaction? Reassurance is a tricky thing. Make sure you don't become their "provider": insecurity and reassurance can then become a pattern, where you become the person who boosts them over and over again, and expend emotional energy on that support. Instead, make it clear that you want them to feel better long-term. Ask what practical things you can do together to make them feel more worthwhile, or distract them with stuff that will help with their self-care and get them out of the cycle of negative thought.

6. Give Them An Object To Come Back To

A tangible testament of worth is, to a person prone to fits of insecurity, a pretty good talisman. If you want to get a friend out of the reassurance-insecurity pattern, provide them with something that lasts and can be referred to whenever they're feeling unloved or unworthy — a card, a letter, an emailed list of their best qualities. It's easy and supportive and doesn't require you to exhaust yourself repeatedly.

It may be mystifying when a scholarship winner or the most beautiful woman you know confides in you that they feel horribly uncertain and doubtful about their own value. How can this person, for whom there are so many proofs of their worth, feel a lack of confidence? How can they interpret the world as rejecting them? The reality is that insecurity is not just for hurt teenagers; sometimes the gold medal winners are the most vulnerable of all, because they rely on exterior things to reassure them of their place. So make sure to be understanding when a friend who seems like their life is "perfect" tells you that they are feeling insecure.

8. Talk Them Down From Catastrophizing

One of the key elements of insecure behavior is catastrophic interpretation of events. A brief text from a partner will mean they no longer love you; being passed over for a promotion in favor of a colleague means that you're not able to do your job. A certain amount of self-questioning is natural, but feeling vulnerable means that insecure people tend to believe in apocalyptic consequences that aren't supported by the facts. Try to apply reason to these thoughts, one by one, and encourage them to view them through a more rational lens.

9. Stop Them Short If They Start Comparing Themselves

Look, comparison is a normal part of the human psyche. We like to keep up with the Joneses, or the Beyonces, or whatever. But this is one of the most important things you can do for a person with insecure tendencies: if you hear them dwelling on a person who's smarter, cooler, more successful, prettier, whatever, stop them in their tracks, and get them to focus on themselves instead. People who suffer from insecurity constantly measure themselves against others and find themselves wanting. Shut this down as soon as you hear it — by reminding them that they don't have to prove anything to anybody. Consider diverting their attention to stuff they love and are passionate about. "I think you're comparing yourself and it's going to drive you nuts; want to talk to me about the softball game next Saturday instead?"

Ultimately, our insecure friends have to decide that they want to feel better about themselves; we can't force them to. But letting them know that there's someone in their life who hears them and appreciates them unconditionally may help set the stage for self-acceptance.