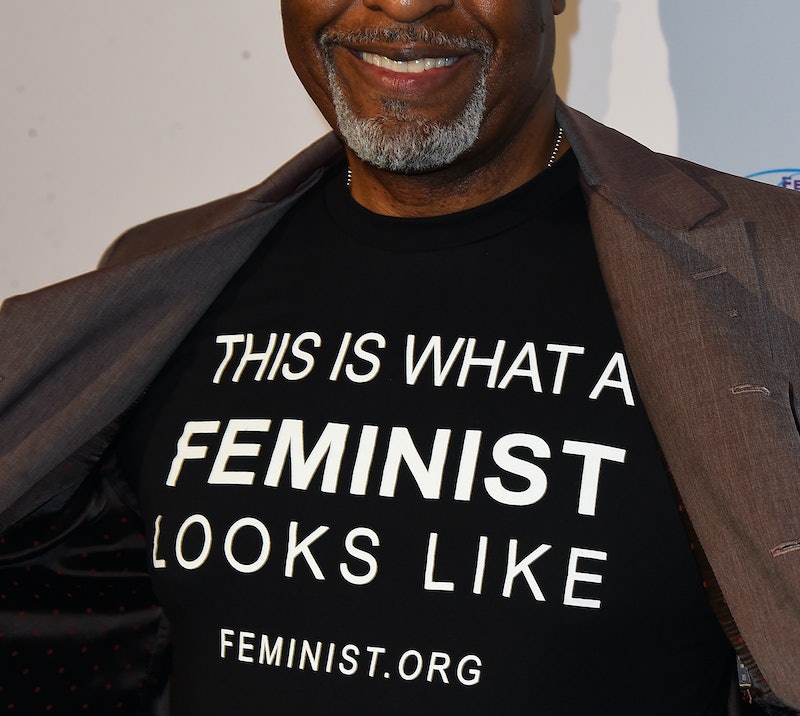 Lately, it has become popular to make fun of men for being feminists in order to win over women. Now, that does happen, and it can indeed be amusing and face-palm-worthy. However, it shouldn't block us from seeing all the valid reasons men are and can be feminists. There are many legitimate reasons why men might feel aligned with the movement that have nothing to do with getting laid, and the idea that men are doing everything for sex is just another stereotype feminism strives to challenge.

The men-use-feminism-to-get-laid stereotype was recently used against Redditor br10n, who is a feminist because, you know, he cares about women. After he stood up to a guy who was tweeting about how feminists can't find husbands, the writer of the tweet told him he was "standing up for feminism so that women would want to have sex with me."

This idea is insulting not only to men who are feminists but also to feminism itself. If the best reason to be a feminist is to get women to date or have sex with you, then that doesn't speak highly of the causes feminism is fighting for. Br10n also shared a fake magazine cover from Imgur that espouses the same stereotype:

Yes, it is hilarious. And yes, it does describe some men who claim to be feminists. As comedian Lane Moore's "Male Feminists of Tinder" Tumblr points out, men do occasionally co-opt feminism to make themselves look more desirable.

However, there are so many more (and better) reasons why men can and do align themselves with feminism. Here are some of them:

1. To Liberate Themselves From Toxic Masculinity

Toxic masculinity is the standard by which men should not have or express feelings, should always be dominant, and must be stronger and better than women. These expectations can wreak havoc on men's mental and even physical health, keep them from forming close relationships, make them suffer silence, and increase their stress. Feminism provides an alternative standard, by which men don't have to possess any traits at all just because they're men, and they can be as feminine as they want without facing social punishment.

2. To Support The Women In Their Lives

While sexism leaves men susceptible to toxic masculinity and stereotypes, it disadvantages women more. Women get paid less than men, get perceived as less intelligent, and face sexual assault and harassment more often. And in many countries, it is considered acceptable for men to abuse women. How could anybody not be angry about that, regardless of their gender? It makes sense that men would be feminists to support the women they know and even those they don't know as they face these injustices.

3. To Improve Their Governments And Workplaces

There's nothing that inherently makes women better leaders or workers than men, but there is something to be said for having governments and companies with thebestpeople, not just the privileged ones, and that requires diversity across the board. By embracing feminism and striving to make the environments under their control more equitable, men leading companies, organizations, and countries can create better lives for women and have a diverse array of talent available for them to make us of.

4. To Make The World A Better Place For Their Children

Men often take more feminist stances when they have daughters, perhaps because they become more personally invested in issues affecting women. You shouldn't need to be a father to understand why women deserve better treatment than the world currently offers, but one reason men might be feminists is that they want their daughters to be treated as fairly as their sons — and want their sons to be free to be who they are.

5. To Challenge All Facets Of Oppression

Feminism is about more than women's rights. It's about LGBT rights, racial equality, and the basic idea that everybody deserves the same respect. Men who have been oppressed due to their sexual orientation, skin color, or anything else may feel solidarity with feminism because, at their best, these movements all support one another and are share the goal of creating a world where people are treated as individuals, not stereotypes.

More like this
Instagram Users Are Reporting Issues Scrolling & Logging In
By Courtney Young
TikTok Is Using A Kendrick Lamar Song To Post Thirst Traps
By Courtney Young
Here's Your Daily Horoscope For May 26, 2022
By Mecca Woods
Here’s Your Horoscope For June 2022
By Alexandria Lettman
Get Even More From Bustle — Sign Up For The Newsletter