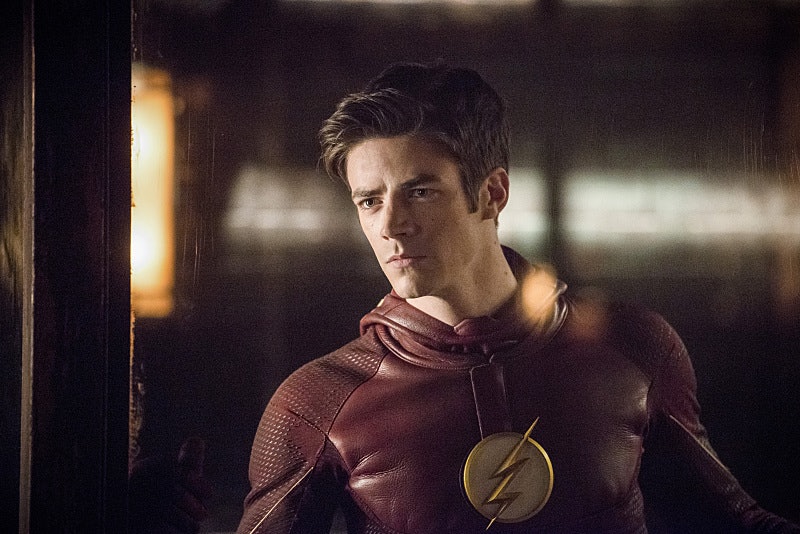 Batman v Superman: Dawn of Justice gave fans their first look at the Flash, the super fast superhero set to star in the new DC Justice League film, as well as his own solo movie. Played by Ezra Miller (We Need To Talk About Kevin), the Flash appeared briefly in Batman v Superman , once in a dream-like sequence with Batman and again in a short surveillance video clip. But fans already watching the hero take down metahumans and save Central City every week on The CW's popular television show, The Flash, didn't recognize the fastest man alive. And that's because, despite being under the same DC umbrella, the Flash is actually being played by two different actors, with Miller taking up the role in the film world, and Grant Gustin playing Barry Allen on television. Since the TV Flash is currently enjoying a successful second season, many might be wondering why Gustin isn't the Flash in the DC movies — and the answer might not be satisfying.

It all comes down to Zack Snyder, the Batman v Superman and future Justice League director, who is building the DC Cinematic Universe for Warner Bros. "I just don't think it was a good fit," Snyder told the NY Daily News recently. The director added that the tone of the television show simply didn't comply with his vision of the story. "Even if Grant Gustin is my favorite guy in the world and he's very good, we made a commitment to the multi-verse (idea), so it's just not a thing that's possible," Snyder said. Essentially, DC and Warner Bros. made a decision to keep their film universe and their TV universe separate.

DC currently has five television shows airing on network television: Arrow, The Flash, Legends of Tomorrow, Supergirl and Gotham. Three of those take place in the same universe — Arrow, The Flash and Legends of Tomorrow, all of which air on The CW. However, just because two shows don't share the same universe doesn't mean they can't cross paths. The Flash has already established the existence of alternate timelines and alternate universes (Earth-1 and Earth-2), and Legends of Tomorrow is constantly traveling through different timelines. Furthermore, the alternate universe storyline is being used for the upcoming Flash and Supergirl crossover. It's pretty obvious that if the studio wanted Gustin to play the Flash on the big screen, they could have explained his presence pretty easily. So why didn't it happen?

It might come down to it simply not being feasible for Gustin to star in 24-odd episodes of television and lead a huge solo Flash film at the same time. It would, undoubtedly, be a scheduling nightmare for all involved. But based on Snyder's comments, the truth also seems to be that he simply wasn't the studio's top choice for the role. Snyder clearly wants to create the DC Cinematic Universe from scratch, despite the fact that casting Gustin would have been an easy way to expand the DC Cinematic Universe beyond Man of Steel. And though it seems like Gustin would be an obvious choice for the role, it's important to remember that The Flash had barely premiered when the news of Miller's casting was announced. In other words, The Flash simply wasn't the hit it is now.

It makes sense, then, that DC would want to hedge their bets. If The Flash tanked on TV, casting a different actor in the role for Batman v Superman would've given them another shot at the character. Why DC decided to include the Flash in the cinematic universe when they were already launching a television show, we'll never know, but the answers to the other questions actually make some sense.

Certainly the filmmakers are feeling more pressure now than they did when the decision was first made. It's likely that The Flash will still be on the air when a Flash film is released in 2018, and Miller's going to have to work hard if he's going to want the support of the Gustin/Flash fandom.